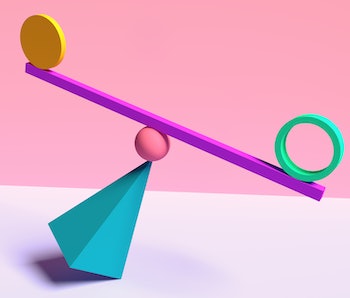 In the Matrix, Morpheus offers Neo a life-altering decision: The red pill or the blue pill? One will wake him up to a dystopian reality where robots govern humanity, and the other will keep him captive but blissfully ignorant of a simulated reality (we think, Neo only picks one). While you may not be the Chosen One, chances are you’re going to have to make some tough choices in your life that can feel just as consequential.

That reality poses a new question: When is the optimal time to make a big decision? The answer may depend on one overlooked biological factor.

How the brain makes decisions

Life is full of choices. From the time you decide to roll out of bed, every decision you make alters the course of your day — indeed, even the decision to roll out of bed is a matter of choice. But some decisions carry weight beyond the here and the now: You might decide to get married, or to quit your job, for example.

The brain’s prefrontal cortex is the region that does the heavy-lifting of making a decision for you. The prefrontal cortex is involved in planning any complex behavior, like making a choice. Your brain takes the context, memories, and emotions into consideration as it computes the outcome. Surprisingly, your brain also considers when you make your choice as a factor in your decision-making skills.

Just as the prefrontal cortex is in charge of decision-making, it also regulates impulsive and risky behavior. And if you’re making a big decision, it helps to know when you’re as level-headed as possible. Thankfully, cognitive neuroscience offers clues to the best time of day for a typical person to make a consequential decision.

The ideal time to make a decision

You might not be a morning person but your prefrontal cortex wants you to be one — most of the time, at least.

In general, make your most important decisions in the morning, research suggests. A 2016 study published in the journal Cognition found that people take more time to ponder their options and make more accurate decisions in the morning. But in contrast, if you need to make a split-second decision, the researchers found it was better to do so in the afternoon.

If you are a night owl, don’t despair yet. Research shows chronotype — your body’s natural inclination as to when to be awake or go to sleep — matters. People who like to get up at the crack of dawn are more likely to be productive and at peak cognitive performance earlier in the day as opposed to those who prefer staying up at night. People who have a late chronotype are more likely to experience daytime sleepiness and have worse cognitive performance — you wouldn’t want to make a big decision when you’re tired and unfocused.

Indeed, a 2017 study showed that for early birds, activation of brain areas involved in cognition is highest in the morning and gradually dips as night approaches. Meanwhile, researchers found the opposite in night owls.

There is an exception to this, however: If you’re making an ethical decision, you’re better off doing it in the morning. A 2016 study confirming the chronotype morality effect found people were more honest and morally aware in the morning. By evening, people are more unethical and more likely to engage in lying or cheating.

When money’s involved, you want to make sure you’re making the right decision for your business. Science says the secret to landing a deal is knowing you and your business associate’s chronotype.

A 2016 study examined how the time of day affected a person’s decision to accept or reject a business offer. The researchers found morning people are more cautious and rational when deciding on a high-risk offer. Meanwhile, night owls were more likely to throw caution to the wind and take more chances with a risky offer.

Keeping your business profitable is always the goal, and to do that you need to know when your mind is sharp. Early birds do this best in the morning. A 2020 study showed that morning people have a more positive mood and show rational decision-making skills when dealing with unfair offers in the daytime.

If you’re part of the night owl crew, mornings aren’t ideal for you. Yet, you don’t want to make a rash and risky business decision. Consider waiting until the afternoon when you’re back from lunch. A 2011 study on judges found ‌they made more favorable decisions when they had a full stomach.

The best time to make a purchasing choice

You’re not the only one who puts stuff in their online shopping cart only to leave the site during checkout. It could be from shipping fees or making the realization that you don’t actually need more clothes or a new phone.

So what’s the difference between abandoning your cart and actually going through with the checkout process? According to scientists, one reason may be that you’re trying to make a big purchase at night.

Research shows ‌you’re more likely to engage in impulse buying at night. There are many factors surrounding impulse buying but a major one is your emotional state and the need for instant gratification. Indeed, a 2015 review shows that emotions influence a person’s judgment and choices. And when the Sun goes down, our emotional state becomes more active. A 2019 BBC article reports how one retailer found one in 15 purchases are made between midnight and 6:00 a.m.

While this late-night shopping trend may be to do in part with our busy lifestyles keeping us away from the stores during the day, it may lead to decision fatigue. According to the American Medical Association, decision fatigue is what happens when a person has spent too long making too many decisions, however big or small, and hit a point where every subsequent decision they make will be less optimal than the last.

The later you stay up may have some sway, too. A 2020 study found that young adults who went to sleep one to two hours later than their usual schedule showed more impulsive behaviors — which could mean more impulse buying.

Bottom line: If you want to make a big purchase online, sleep on it and wait until morning to make the optimal decision.

More like this
Mind and Body
6.29.2022 6:30 PM
How music makes you feel may depend less on your brain than scientists once thought — study
By Allison Parshall
Mind and Body
6.25.2022 1:00 PM
Why “micro workouts” can have significant mental and physical benefits
By Sam Reiss
Science
6.19.2022 1:00 PM
What is my dog thinking? Science may finally have an answer
By Tara Yarlagadda
Related Tags
Share: