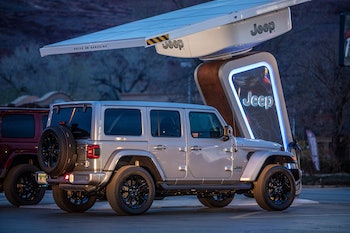 When it comes to electric vehicles, range anxiety is always the easy excuse for not buying one. This comes in two forms: the actual range of the EV itself on a full charge, or the ability to charge it up on the way to or from wherever you’re going.

If you’re going to drive to work and back home again, this doesn’t apply since most folks could make that round trip with even the lowest-range EVs on the market. But people want to go places other than work sometimes — occasionally they want to go exploring.

THE GREAT OUTDOORS - The great American road trip is a treasured pastime. This summer, in the throes of lockdown, I fled home for a socially distanced week exploring Joshua Tree, Sequoia, and Yosemite National Parks. With indoor activities a non-starter, getting outside was essential to maintaining sanity.

I made the trip in a Kia Seltos, a compact, gas-powered SUV that ended up being perfect for the job. It was comfortable, had plenty of cargo room, and was relatively fuel-efficient. I could have, since I never actually left the pavement, done the journey in an electric vehicle. But what if I decided to wander a bit further off the beaten path?

Between the Tesla Superchargers, Electrify America, and a host of other EV charging networks, the roads of America are fast becoming EV-friendly. And Rivian, a well-funded EV startup that plans to launch its first vehicles later this year, plans to quickly build out its Rivian Adventure Network of fast-chargers across the country with 600 sites by the end of 2023.

Charging off-road - But here’s where things get interesting. This week, as part of its annual Easter Jeep Safari week in Moab, Utah, Jeep unveiled its own branded EV charging network: the inventively named Jeep 4xe Charging Network. Earlier this year, Jeep launched its first electrified product with the plug-in hybrid Jeep Wrangler 4xe — 4xe is a play on 4x4, you see.

The first three chargers will open later this spring at three iconic off-roading trails with significant connections to the Jeep brand: Moab, Utah; at the Rubicon Trail in Pollock Pines, California (for which the top-tier Wrangler trim is named); and Big Bear, California, near San Bernadino National Forest. Jeep promises many more charging stations at similar locales by the end of 2021.

“It is our goal to provide electric vehicle drivers with the freedom to get to where they want to go — whether it be on a highway or off-road,” said Palazzo in a press release. “We were able to work with Jeep to identify where their drivers will need charging access most and make it a reality.”

Jeep also unveiled the Magneto, an all-electric concept SUV based on the Wrangler that could presage the Jeep brand’s first fully-electric off-roader.

Tesla already has a fleet of Superchargers near a number of national parks, including the Grand Canyon, Yellowstone, and Yosemite. Rivian plans to make similar installations with its upcoming network.

Charger network wars - Though the Electrify America network (including the new Jeep network) will be open to all EVs, both the Tesla Supercharger network and the upcoming Rivian Adventure Network of 3,500+ DC charging stations will be exclusive to each brand’s vehicles. That means if you buy a Tesla you can use Superchargers but not Rivian chargers, and the opposite if you buy a Rivian vehicle. And if you buy some other brand’s vehicle, you can’t use either one.

The Supercharger network has been key to Tesla’s growth over the past few years. I’ve recommended Tesla vehicles to friends based on little more than the ease of Supercharging when on a road trip. Elon Musk has said in the past that the company doesn’t do traditional advertising but instead invests that budget into Superchargers which, not coincidentally, act as giant glowing billboards for Tesla all across the world.

But with the EV market still so nascent, it’s difficult to imagine this charger network siloing as anything but hurtful to the overall electric vehicle landscape. It would be absurd to think that buying a Ford F-150 meant you could only fuel up at ExxonMobil gas stations, but that’s exactly what we’re heading for with Tesla and Rivian going head-to-head with charging networks.

Still, when it comes to EVs, the more competition — and thus more chargers — the better. Probably.

By the way, if you liked this article, you’ll love my weekly car review newsletter PRNDL. Click here to subscribe for free on Substack. I’ll even answer your new car questions!