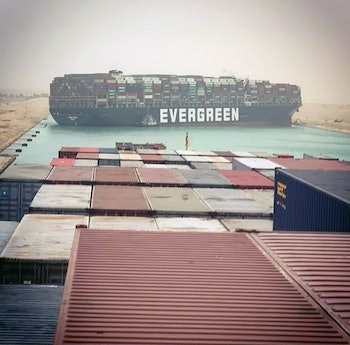 An enormous 1,300-foot long container ship has run aground in the Suez Canal, blocking a crucial shipping lane that handles some 12 percent of the world’s global trade.

What happened — The cargo ship Ever Given was transiting north through the Suez on its way from China to Rotterdam when it ran aground against the eastern bank and ended up sideways blocking the canal and jamming up the waterway so badly that only small boats could get past.

Nearly every available tugboat, as well as smaller construction equipment working from the banks of the canal, was sent to free the fully-loaded ship, but wind conditions and the sheer size of the Ever Given made this particularly difficult.

What’s the impact? — Dozens and dozens of ships, with more arriving every hour, are currently stuck in the area with no option but to wait for the ship to be freed. The only alternative is traveling around the Cape of Good Hope in South Africa which would add weeks to a sea voyage between Asia and Europe.

A screenshot from the ship-tracking website MarineTraffic shows the extent of the problem, with numerous ships at anchor at the south end of the canal where it meets the Red Sea, and more at the northern end where it enters the Mediterranean. Oil prices rose on the global markets overnight amid concerns that the more than one million barrels of oil that pass through the waterway every day might be significantly delayed.

The three-year-old Ever Given has a total capacity of 20,124 twenty-foot equivalent units (TEU), a cargo capacity measurement used for container ships, and a gross tonnage of nearly 220,000. It is 399.94 meters (1,312 feet) long and 59 meters (193 feet) wide. It departed the Port of Tanjung Pelepas in Malaysia on March 13 as part of a scheduled China-Europe-Mediterranean transit and was expected to arrive in Rotterdam on April 1.

Correction: A prior report suggested that the ship had been dislodged and was in the process of being moved, but this report has been retracted by GAC, the shipping logistics firm that made the assertion.