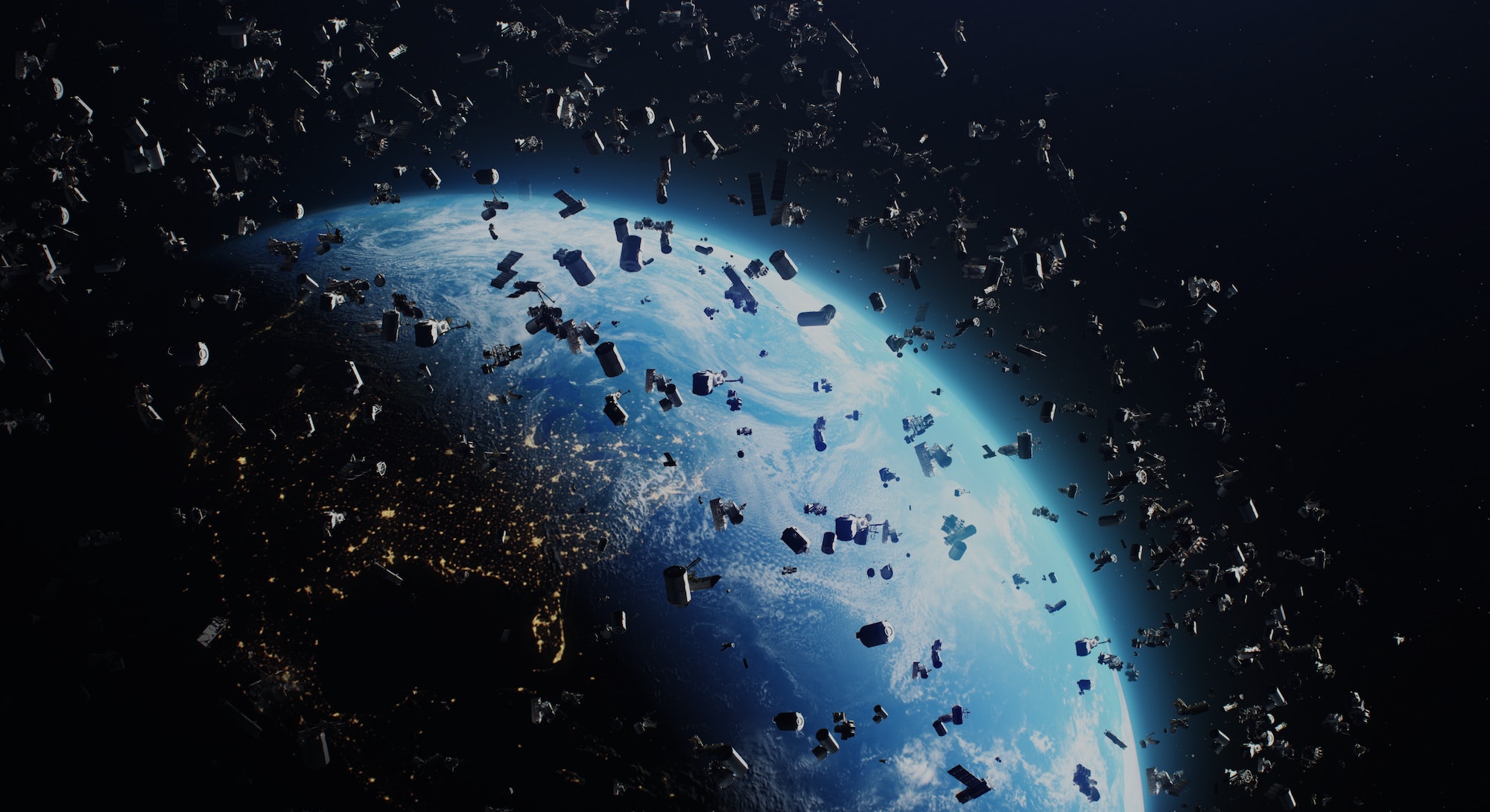 If you have never heard of Privateer, then know you are not alone. The start-up, co-founded by Apple’s Steve Wozniak, just emerged into the public sphere in March 2022. Its mission is not to reinvent the iPhone, however. Instead, it plans to clean up a specific area of Earth’s environment that is currently suffering from a massive junk problem: Low-Earth orbit.

Privateer is, in part, the brainchild of Moriba Jah, a self-styled space environmentalist and associate professor at the University of Texas, Austin, who specializes in orbital mechanics. For years, Jah has evangelized on a point that more and more astronomers and space scientists are starting to acknowledge: The space above Earth is full of human litter in the form of satellites and junk. The race to launch yet more satellites in the next decade may mean we are doomed to replicate the environmental mistakes we’ve made here on Earth in space.

Jah was brought on to Privateer by Wozniak and a third co-founder, engineer Alex Fielding. In March, the startup released its first product, Wayfinder, which allows anyone to visualize and track satellites and debris in orbit.

“We can be a foundational layer of information to help people be safer in space, be more secure and [promote] long term sustainability of the space environment as an ecosystem, additionally to land, air and ocean,” Jah tells Inverse.

If the space industry succeeds in putting more people and more technology in orbit around the planet, it needs services like Wayfinder. The number of satellites launched into Earth’s orbit has exploded in recent years, as has the amount of space debris.

Satellite constellations, swarms of hundreds, sometimes thousands, of satellites have greatly contributed to the rise. Last year, companies and governments launched 1,702 new satellites to orbit, according to figures from the Union of Concerned Scientists. As of the end of 2021, the total number of satellites orbiting the Earth was 4,852 — nearly double the number since 2018.

SpaceX’s Starlink internet has already launched more than 2,000 satellites to low-Earth orbit with more to come, while OneWeb, a European competitor, has sent 428 up into orbit and plans at least 220 more. Amazon’s new Project Kuiper, another Starlink competitor, proposes sending up more than 3,000 satellites.

The boom is driven in part by the drop in the cost of sending things into space — as the price goes down, the number of commercial space companies goes up.

In 2011, a trip off-planet to low-earth orbit cost an average of $1.6 billion per flight — about $30,000 per pound of payload (in 2021 dollars), according to the Center for Strategic and International Studies. Today, SpaceX offers bargain-basement prices in comparison: At the start of 2022, Elon Musk’s company charged about $62 million per launch — around $1,200 per pound of payload. Satellite companies don’t have to pay for the whole launch, just a fee based on the weight of whatever they want to put into space. SpaceX recently announced a price hike of around 8 percent (inflation comes for us all, it seems), but its prices are still minuscule compared to historical fees.

As a result, space is getting as congested as a city bypass. Thousands of satellites flying around the planet are only part of the problem: Add in thousands of pieces of debris, dead satellites, and other junk zooming among them at up to 18,000 miles per hour, and the traffic problem becomes dangerous.

The latest numbers from the European Space Agency suggest there are currently around 36,500 space debris objects larger than 10 centimeters in length orbiting Earth — this is all artificial junk. Approximately 30,920 of these are tracked. We’re unsure about the location of the rest.

Estimates also suggest there are approximately 100,000 other objects, all measuring between 1 and 10 centimeters, which are entirely untrackable. These tiny pieces of space trash may be small, but because they are traveling at thousands of miles per hour, even a speck the size of a drop of paint, NASA says, can seriously damage a spacecraft.

So what to do? Like a traffic pile-up on the highway, you need to be able to route around the problem.

When a satellite is on course to hit another satellite or a large piece of debris, there are warning systems in place to alert the satellite operator. Satellites fitted with a propulsion system can adjust their course to avoid collisions. But even that’s getting trickier.

“The rate that satellites have to dodge is very much higher than it was a few years ago,” Jonathan McDowell, an astrophysicist at the Harvard-Smithsonian Center for Astrophysics, tells Inverse.

“Imagine increasing that to the point where we have 100,000 active satellites. Satellite A dodges Satellite B, and Satellite C dodges Satellite D, and you have to worry whether post dodge they’re now going to run into each other.”

“It’s an N-squared problem. Ten times as many satellites are 100 times worse.”

Privateer plans to launch another product, Resslek, a conjunction management service. This product will be able to tell companies and organizations if satellites are on a collision course. (Resslek is an anagram of Kessler, the name given to the problem of having so much junk in orbit it only creates more and more trash.) Beyond that, Jah, Wozniak, and Fielding plan to take a somewhat paradoxical step to solve congestion in Earth’s orbit — they’re going to launch satellites.

The goal, Privateer claims, is to use their satellites to monitor space junk and police traffic more effectively. They also want to offer “satellite-as-a-service” rentals, giving multiple other entities the option of using Privateer’s satellites instead of launching their own.

“If you’re going to be able to monitor an environment, you need sensors everywhere and having sensors that are part of the space traffic makes sense,” Jah says.

Even with technology like Privateer’s, the problem may have already reached a point where monitoring and managing the traffic and debris is insufficient.

Aside from potential collisions which could cause billions of dollars of damage and interrupt crucial technologies, having an increasing number of satellites circling the globe causes a host of issues here on Earth.

Astronomers have felt the effects of increased satellites more keenly than most. Julie Davis, the John N. Bahcall Public Policy Fellow at the American Astronomical Society (AAS), tells Inverse that reflected sunlight bouncing off satellites can cause streaks in optical and infrared images, which interfere with astronomy.

“We have several observatories, including a brand new one that isn’t even operational yet which will be the worst affected, that’s the Vera Rubin observatory in Chile,” she says.

Davis explains there are other problems, too. Satellites broadcast using radio transmissions, which can interfere with astronomical observations using radio wavelengths. Historically, astronomers have been able to work with organizations emitting radio waves on the Earth to establish quiet exclusion zones around telescopes, but that’s not possible with satellites that pass overhead.

McDowell believes it will only be “a few years” before we begin to see the constellations with the naked eye in the night sky — especially in places less affected by light pollution.

Indigenous populations held back by a digital divide stand to gain from satellite internet constellations. But some members of these communities have spoken out against the potential dimming of the night sky, which can play an essential role in their culture.

“We screwed up the Earth... and now we’re destroying space.”

“Indigenous communities did not feel consulted in all these initiatives done in their name,” Aparna Venkatesan, professor in the Department of Physics and Astronomy at the University of San Francisco, tells Inverse. She has held listening sessions with multiple indigenous communities to get their views on the problem.

“Many of them said…that this was colonization happening all over again, and in erasing the stars their identities were being erased all over again,” she says.

“Sometimes when they were having ceremonial moments with the stars, they felt their connection was literally interrupted.”

Other human activities could make the Earth’s orbit even more cluttered. In October last year, a Russian missile launched from Plesetsk Cosmodrome, about 500 miles north of Moscow, flew into space and destroyed Kosmos 1408, a Soviet-era satellite. The test was supposedly a show of force, notably occurring just months before the invasion of Ukraine.

The explosion caused thousands of pieces of debris to fly into space and forced astronauts on the International Space Station to sleep in their spacecraft, ready for a quick getaway should the station become damaged by the shrapnel. It took space agencies months to find the largest pieces of debris. While space agencies searched, they could have been anywhere, on course to hit anything in their way.

“I was so frustrated because I wanted someone to ask the question: ‘Why don’t we know where to move the space station?’” he says. The ISS is moved every couple of months to avoid collisions, but there was no data to act on in this case.

“People think about private space, and they think billionaires, cowboy hats, rocket rides, ‘woohoo!’. They don’t think, would I take the rocket ride? I’d love to go to space, but I wouldn’t do it right now.”

The 2021 SpaceX mission Inspiration 4, the first human spaceflight to circle the Earth with only private citizens on board, took the crew to an orbit of 585 kilometers altitude. Fielding says they went that high up for a reason.

“The space station is at 400 [kilometers]. Why did we put up these citizen astronomers and astronauts at 150 km above it? It costs a lot of extra fuel to get that extra 150 km,” he says.

“It’s just the hope that there was less trash there and they wouldn’t die on a mission everybody was watching. That’s a terrifying thought.”

Privateer’s technology promises to track satellites and debris effectively and bring more accountability, predictability, and transparency to the Earth’s orbit. But will it solve the issue or exacerbate it? Jah believes there needs to be consensus on the severity of the problem before any firm steps to limit satellite launches.

“There has to be some pretty substantive evidence of what the detriment of these things is and then somehow weighing the benefit versus the detriment of more objects that provide capabilities for technology and people on the ground,” he says.

“How can space not be a human environment when Earth is?”

Others aren’t so sure.

“This is a classic environmental carrying capacity problem, which is you have some problem due to too much stuff. And so you find a fix, and you use the fix to improve the situation or just to let you shove more stuff in to get to the same level of horribleness. That’s the danger here,” McDowell says.

He believes there needs to be more regulation at the national level, from the FCC and FAA, and an international framework that countries can adopt.

Astronomers have held talks with satellite operators and successfully negotiated concessions to make their satellites less bright by painting them black or installing visors. Still, according to Davis, they’re reluctant to demand regulation for fear of driving private companies away from the bargaining table entirely.

Venkatesan and others want acknowledgment that space is a human environment, so it can no longer claim exemption from the environmental protections in place on Earth. That would go some way to ensuring the private companies in space cannot make the same mistakes we’ve made on the ground.

“Many of us believe all it will take is one lawsuit to set the precedent, and the wall will begin to crumble. Because how can space not be a human environment when Earth is? It comes again from this binary thinking. Like everything, it’s a continuum,” she says.

“Something that belongs to us all is being taken in our name, with potentially irreversible consequences for everyone.”