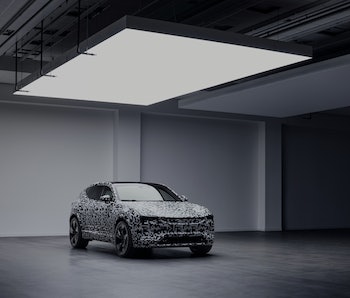 Polestar is one of my favorite electric car makers. It’s kind of a spinoff from Volvo, sharing a corporate parent and taking the Swedish firm’s lead designer as its CEO, as well as Volvo’s overall design ethos. Two vehicles have been released so far, Polestar 1 and Polestar 2, both of which I really liked when I drove them.

Next up is the Polestar 3, an “aerodynamic electric performance SUV” that could be one of the most exciting electric vehicles to come out in a year chock full of exciting EVs. One of the more interesting things about the 3 is that it will be manufactured at Volvo’s existing assembly facility in Ridgeville, South Carolina.

“Production in the USA reduces delivery times as well as the environmental impact associated with shipping vehicles around the world. It will even have a positive impact on the price of Polestar 3,” said Polestar COO Dennis Nobelius in a press release. “All of this makes the brand even more competitive in the critical American sales market.”

The Polestar 3 is shaping up to be one of the most exciting cars of 2022. Here’s everything you need to know about the new Polestar 3, from release date, price, and specs to range and charging time.

This story is developing and will be updated as more information becomes available.

When is the Polestar 3 release date?

Polestar says production of the Polestar 3 is expected sometime in 2022.

What is the Polestar 3’s price?

The company has not released full details on the Polestar 3, but it’s likely to be a good chunk more than the Polestar 2, which starts at $45,900 for the long-range, single motor option.

The company has positioned the Polestar 3 as an all-electric competitor to the Porsche Cayenne SUV, which itself starts around $70,000.

What is the Polestar 3’s range?

We don’t have full details on the car yet, but it’s could be in the same range as the Polestar 2. That car reports 249 and 270 miles of EPA-estimated range depending on whether you get the dual- or single-motor variant.

Or, more likely, expect something greater than 300+.

What is the Polestar 3 charging time?

We don’t know yet but expect it to be competitive with other EVs on the market. Perhaps 10-80 percent in 30 minutes.

The AWD version of the Polestar 2 sports up to 408 hp and 487 lb-ft of torque. It’s likely that the Polestar 3 will make significantly more than that.

Polestar has not yet shared (are you sensing a trend?) but the Polestar 2 with the performance AWD dual-motor setup can go 0-60 mph in 4.5 seconds, while the slower single-motor can go from 0-60 mph in 7 seconds. Expect the 3 to exceed those marks.

Is the Polestar 3 self-driving?

No, but it may include Polestar’s next-generation “Highway Pilot” advanced driver-assist system. That system is said to use on-board lidar to help keep your car centered in your lane on the highway, and may even allow for completely hands-off driving.

Does the Polestar 3 have Apple CarPlay and Android Auto?

That’s not clear. The Polestar 2’s infotainment is powered by Google, but Android Auto and CarPlay support have not yet arrived. We’ll have to see what the Polestar 3 offers.

How can I pre-order the Polestar 3?

More like this
Innovation
8.13.2022 9:00 PM
Want to buy an EV? Here’s what you need to know about the Inflation Reduction Act
By James Morton Turner and The Conversation
Innovation
8.9.2022 11:00 AM
This self-healing material could fix your dinged-up car in 30 minutes
By Molly Glick
Innovation
8.15.2022 2:00 PM
Tesla software updates reveal a potential roadblock to electric vehicles’ expansion
By Vivek Astvansh and The Conversation
Related Tags
Share: