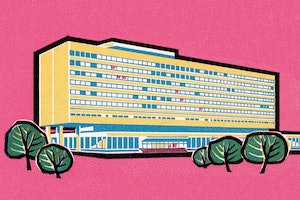 It takes a lot of energy to keep your office’s lights on and the temperature just right. According to the UN, energy used in buildings and in their construction around the world accounted for 36 percent of energy use and 39 percent of energy and process-related CO2 emissions in 2018.

To meet the standards set by the Paris Climate Agreement, the UN says that action is needed to reduce the energy load from our workplaces, including switching to renewable energy sources, improving building design, introducing efficiencies in heating, cooling, ventilation, appliances and equipment, and using nature-based solutions.

That’s a tall order that needs to be directed by leadership at the city, state, and national levels. But there are improvements that could be done at the office level that will not only reduce energy use and CO2 emissions, but improve the health and well-being of office workers.

“We’ve become an indoor species,” said Heidi Creighton, associate principal of the sustainability group at the Los Angeles office of Buro Happold, a global engineering consulting firm. “We spend 90 percent of our time indoors, so we need our buildings to take care of us.”

Two of the most prominent solutions are improving air quality and office lighting.

The National Center for Biotechnology Information classifies sick building syndrome as when “occupants of a building experience acute health- or comfort-related effects that seem to be linked directly to the time spent in the building.” Although the cause of SBS is not known and may be related to other conditions of sufferers, NCBI points to several factors that may contribute to the condition, including chemical contaminants from both indoor and outdoor sources, biological contaminants, and inadequate ventilation.

Inadequate ventilation looks to be the ultimate culprit in causing certain people to not feel well after spending time in their office. Cornell University researchers analyzed four multi-story office buildings and concluded that workers in poorly ventilated offices were twice as likely to report SBS symptoms as employees in well-ventilated environments. Meanwhile, Harvard researchers found that people who work in well-ventilated offices had significantly higher cognitive functioning scores and were better able to respond to a crisis or develop strategies.

What causes most indoor pollution? According to a study out of Purdue University, it’s other people. The researchers analyzed the air of office spaces in a building rigged with thousands of sensors and found that volatile compounds in human breath linger in rooms even after people leave the office — an effect that increases with the number of people.

“We found levels of many compounds to be 10 to 20 times higher indoors than outdoors,” said study co-author Brandon Boor. “If an office space is not properly ventilated, these volatile compounds may adversely affect worker health and productivity.”

This is why it’s important to test an office’s air quality, which has become easier thanks to the introduction of relatively inexpensive air quality monitoring devices.

“A big trend we’re going to see is a rise in continuous air quality monitoring,” said Kathleen Hetrick, Buro Happold’s senior sustainability engineer in LA. “Having dashboards and visualizations is helpful for engineers and anyone concerned about their health.”

After using an air quality device at Buro Happold’s LA office, Hetrick discovered high levels of VOCs (volatile organic chemicals) despite the office being LEED platinum certified. It turns out, the cleaning crew had been using harsh cleaners that had been labeled as green products. After showing the building’s management the data, it changed the materials it used. Choosing greener materials in both the cleaning and construction of offices could have a trickle-down effect around the globe.

“By choosing better materials, that makes a huge impact on communities,” because they no longer have to source and manufacture dangerous products, Hetrick said. “A lot of harsh chemicals are petrochemicals made from fracking or other oil-based materials. Demand drives better products.”

Following decades of increases, American electricity use declined over the past eight years, reports The New York Times. A large part of those savings came with the popularization of energy efficient light bulbs, particularly LED bulbs, which are 85 percent more energy efficient than traditional bulbs and can last for 25 years. These bulbs became standard after national light bulb efficiency standards passed in 2007 went into effect in 2012.

The energy savings are great, but LEDs can also greatly benefit office workers with their ability to adapt to our circadian rhythms — warm light in the morning, bright light in the afternoon, and dimmer light in the evening. After commercial real estate firm CBRE implemented this mix into its office, employees’ productivity increased by 12 percent. They also felt happier and more energized.

There’s another solution that’s even better for office workers: natural light. If offices are designed in a way that lets sunlight in with shading that reduces glare, it can lead to savings because overhead lighting could be turned off for most of the day. Office workers who are exposed to more light have been shown to get more and better sleep, exercise more, and have better quality of life compared to office workers with less light exposure, according to a Northwestern University study.

“Architects need to be aware of the importance of natural light not only in terms of their potential energy savings but also in terms of affecting occupants’ health,” said study co-author Mohamed Boubekri.

Improving the air quality and lighting in our offices has a profound effect on the health of workers while helping the planet. This gives companies a competitive edge and helps attract younger talent who prioritize the environment.

Monitoring will play a big role in these improvements as “data is power,” Hetrick said. This will help buildings move “away from prescriptive solutions to performance-based ones.”

Creighton and Hetrick suggested that companies speak with their property management companies about implementing improvements and asking for feedback from their employees.

“If you do something small, then analyze and make changes. It’ll affect the productivity and health of your staff,” Creighton said. “Staff is 90 percent of operating costs and is a company’s biggest asset.”

More like this
Innovation
7.30.2022 11:00 AM
Congo peat swamps are under threat — with catastrophic environmental consequences
By Bart Crezee, Simon Lewis and The Conversation
Innovation
7.30.2022 10:00 AM
Railways around the world are literally melting — here’s why they can’t take the heat
By Kangkang Tang and The Conversation
Mind and Body
8.7.2022 7:00 PM
Repairing America’s underground infrastructure reveals an unsettled scientific debate
By Robin Lloyd and Undark
Related Tags
Share: