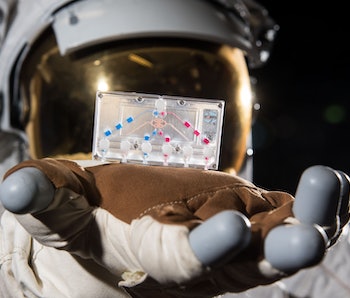 Science labs are the beating heart of research here on Earth, but they can often reside in drab, windowless basements. Instead of just joining these terrestrial labs, some young scientists of the not-so-distant future may have the opportunity to gather data and tinker with new technologies from a more cosmic vantage point: low-Earth orbit (LEO).

Launching science labs to space was top of mind at MIT Technology Review’s EmTech conference last week, where astronauts and entrepreneurs alike discussed how and why research might travel to the final frontier.

For example, microgravity could enable medical and material science research beyond Earth’s capabilities. Researchers are already studying human tissue in space to learn how it affects muscle deterioration and immune response. Such work could be vital for astronauts hoping to one day make the trek to Mars — and beyond.

Science in space is a subject that Danielle Wood, assistant professor of media arts and sciences and of aeronautics and astronautics at MIT, is well-versed in. Before arriving at MIT, Wood researched topics like satellite design and technology policy at multiple NASA offices. Now, she works on experiments being sent to the International Space Station.

One major shift she predicts: Unlike in past decades, future above-Earth research won’t be confined to government agencies, she says.

“Already we see that companies that have been active in space for years, plus some that are newer, are proposing smaller space stations,” she says, which could serve as a mixture of both luxury tourist destinations and rigorous scientific labs.

These companies include Blue Origin, Nanoracks, and Northrop Grumman, which have all received over $100 million each from NASA to develop future space stations.

Space labs as we know them — While labs in space may sound like a futuristic dream, they’ve actually existed for decades, Wood says. But they looked a bit different compared to what scientists envision for the future.

Operated first by the Soviet Union, and then Russia, the Mir space station was the first to conduct scientific experiments in space. It was active between the early ‘90s and 2001.

Since 2005, all research has gone down in the U.S. National Laboratory, which is part of the ISS. In these tube-shaped labs, you’ll find no floors or ceilings, Wood says. Instead, lab work unfolds in 360 degrees throughout the room as scientists float about.

Wood is among a large number of Earth-bound scientists who create experimental payloads to be shipped — or rather, rocketed — to ISS to be meticulously monitored by onboard astronauts. In recent experiments, astronaut scientists have played with fire and watched human skin heal.

Why it matters — These institutions may play a role in helping space-faring humans survive journeys to distant planets. And many technologies invented first for space, like memory foam mattresses — Wood says such could impact life on Earth as well.

“We can discover things about materials, biology, plants, animals and humans that are uniquely observable in space,” she says. “That will help us design for Earth, and then also design for the future of how humans will operate in space.”

Space labs could also help human engineers develop more sustainable design practices through “design optimization practices [that] can be applied on Earth, as well as recycling and reuse strategies,” says Olga Bannova, director of the space architecture graduate program at the University of Houston. There, she researches the future of space habitats, including inflatable hydroponic laboratories.

To power out-of-this-world research, a ‘space internet’ could connect fragmented stations and labs together. You can compare this to a shared server at a university.

Space communications companies like Aalyria are already looking to make this a reality, said Steve “Bucky” Butow, who oversees this contract work as director of the U.S. Department of Defense’s innovation unit, at the conference.

“Everything that’s in space today is largely disconnected,” Butow said, such as purpose-built satellites and systems with secretive communications systems. So it’s pretty much like working on Earth in the pre-internet days, when you had to have the right tools and software in order to get information from all those fragmented systems.

Now, “the recognition is that there’s actually more economic benefit to having integrated architectures, much like your mobile phone,” he said.

What’s next — As for what these labs will actually look like in the next decade or two, Wood says possible designs are already in the works, including expandable modules like NASA’s BEAM (which is currently attached to the ISS). These types of structures take up minimal volume because space cargo can be attached to existing modules to be pressurized.

It’s also possible that the “people” running experiments in future space labs may not be people at all, Wood says. Instead of assigning astronauts to a scientific payload, the experiments may be sent to automated and remotely run LEO labs — especially for work that may prove dangerous to humans, like high-temperature or high-pressure experiments that could blow up.

Exactly how much of this speculation will come to fruition in the next decade is hard to predict, Wood says, but she remains hopeful that more research will soon blast off above our atmosphere.