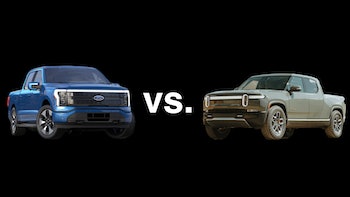 To a non-truck person, every pickup looks pretty much like another. Whether Ford or RAM or Rivian, there’s room for people inside, a bed for stuff outside, and not much else besides.

And for electric trucks, that’s true to a point. Take the two EV pickups that will ship in volume in 2022 (leaving aside the low-volume Hummer EV Pickup, the halo electric vehicle for GMC, for this particular exercise):

You can price them out similarly, which makes for a fair comparison, but there isn’t an automatic “winner” here. Which truck is better depends on why you’re buying an electric truck and what you’re using it for.

Using the configurator on Ford.com, I built a fully loaded Ford F-150 Lightning Platinum that priced out to $92,914 after destination charges but before any tax incentives. Similarly, I created a Rivian R1T with a final price of $92,300.

See also: One ride in the new Ford F-150 Lightning told me everything I needed to know

The Ford F-150 Lightning Platinum and Rivian R1T are different in many ways, including size, capability, and attitude. Which one a buyer choose will likely depend more on what they like and value than on the actual comparison of the vehicles to each other.

The Ford looks more like a traditional full-size pickup (for better or worse), while the Rivian is more consumer-luxury- and off-road-focused. The Rivian will be easier to maneuver around urban and suburban areas, while the Ford has more storage in the frunk and truck bed.

But if you’re trying to choose between these trucks and you haven’t made up your mind yet, here’s everything you need to know about how the trucks compare stats- and feature-wise, and the things you’ll want to consider as you make your electric pickup purchase decision.

Both trucks price out to similar numbers, a bit more than $92,000 in my builds. Though you can nip and tuck on the Rivian to bring the price down a bit (more on what I added in a minute), the F-150 Lightning Platinum is fully loaded already, and you have to drop down quite a ways to the Lariat trim if you want to slice the price.

The Extended Range Lariat starts in the $78,000 range (which is similar to the starting price of the Rivian, it should be noted), but let’s go big or go home and, in this scenario, there’s pretty much the same money.

And for now, both Ford and Rivian are eligible for $7,500 federal tax incentives, though Ford is rapidly moving towards the 200,000-unit cap where the credits begin to phase out.

The standard battery in the Rivian R1T delivers an EPA-estimated range of 314 miles. There is a larger battery option coming (at a $10,000 premium), but it likely won’t be available for another year or two, so we’ll ignore it for now.

Ford’s extended range battery comes standard in the F-150 Lightning Platinum and is good for 280 miles, according to manufacturer estimates. In comparison, Lariat and below have an estimated range of 300 miles because they’re lighter than the feature-packed Platinum. The actual range may vary by build when official numbers come out.

In the grand scheme of things, a difference of 34 miles in the rated range isn’t a game-changer and will be affected significantly by payload and driver behavior. It’s also worth noting that Ford’s estimated range includes having 1,000 pounds of payload on board.

Reviewed: The Rivian R1T is the first EV designed for Americans

In practical terms, there’s no difference in the towing numbers between the F-150 Lightning and the Rivian R1T — but in truck world, numbers are everything, and the Rivian wins here, with a maximum tow rating of 11,000 pounds.

What will really matter is how far these trucks can go while towing, and for that, we’ll have to wait and see how the Ford performs. Rivian suggests that hauling a heavy load can hurt range by as much as 50 percent.

This is one of the most significant differences between the two trucks, with Ford’s 67-inch bed an entire foot longer than the Rivian’s 54-inch with the tailgate up. The Rivian R1T does include a built-in powered, lockable tonneau cover and it has a clever gooseneck tailgate that extends the total length of the bed to 83.6-inches without any seams or openings in the floor.

Ford also has a built-in scale to measure total payload.

The Ford F-150 Lightning has the larger Frunk by a significant margin, with 400 liters of space to the Rivian’s 314 liters.

It’s also easier to get to, thanks to a bumper-height opening on the Ford versus needing to lift cargo over the grille on the Rivian. The Ford also has several more power outlets in the frunk, including four 110-volt residential power outlets and USB-C and USB-A ports to keep your gear charged.

The Rivian includes a 12-volt outlet but no 110-volt plugs. Both the Rivian and Ford have drain plugs in the bottom of their frunks, allowing for easy hose-out or use as a cooler while tailgating.

The Ford F-150 Lightning and Rivian R1T both seat five passengers, with heated and cooled seats up front, and rear heated outboard seats. Both Lightning and Rivian have large infotainment and dash cluster screens. However, the Rivian design team has eliminated almost all buttons from the cabin. In contrast, Ford still has a number of physical controls, including a volume knob and manually adjustable air vents.

The Rivian includes a stereo from Meridian, and it’s one of the finest in-car audio setups available from any manufacturer. The 18-speaker B&O stereo in the F-150 Platinum will be excellent but likely not as good as the Rivian system.

The Rivian R1T holds a clear advantage in off-road performance and can traverse incredibly challenging terrain with relative ease. The Ford F-150 Lightning is happier navigating trails than rock-crawling, but it’s still quite capable for what most people will use it for.

The Ford F-150 Lightning Platinum includes standard Ford Co-Pilot360 Active 2.0 with BlueCruise and Active Park Assist. BlueCruise is a hands-off driving system for limited-access highways where the driver can take their hands off the wheel completely as long as they continue to watch the road for hazards.

The Ford’s Active Park Assist feature can scan for parking spots and then park the truck in a suitable parallel or perpendicular spot while the driver supervises, handling steering, shifting, braking, and accelerating.

Rivian includes its Driver+ system standard, including a Highway Assist feature that will eventually automatically steer and adjust speed in the same way that Ford’s BlueCruise does. The current Rivian system does not allow for fully-hands off driving, instead of allowing for brief periods of hands-off but the driver still needs to touch the steering wheel from time to time.

When connected to an appropriate home charging station, the Ford F-150 Lightning can act as a backup battery for the entire home. Ford says a fully charged Lightning would be able to power a typical American home for three days, while it could power just essential items for as long as 10 days.

See Also: See a full gallery of the Camp Kitchen in action

The Camp Kitchen is a $5,000 option that fills the Gear Tunnel with a fully-equipped slide-out kitchen, including a two-burner induction cooktop, a four-gallon water tank, and sink, and a 30-piece kitchen set from the Japanese luxury outdoor adventure brand Snow Peak.

The Rivian R1T comes with a five-year/60,000-mile bumper-to-bumper warranty, plus a battery pack and drivetrain warranty of eight years or 175,000 miles.

The Ford F-150 Lightning comes with a three-year/36,000-mile bumper-to-bumper warranty, plus an electric vehicle component warranty of eight years or 100,000 miles.

Both companies cover reduced battery capacity to a minimum of 70 percent of the original capacity over their respective warranty periods.

Neither the Ford F-150 Lightning nor the Rivian R1T are readily available.

The Rivian R1T must be ordered online with a $1,000 deposit and, though they have begun shipping to customers in small numbers, new reservations are unlikely to be filled until 2023, if not longer.

Ford will begin deliveries of the F-150 Lightning this spring. New reservations must be placed on Ford’s website or directly with a Ford dealer. It’s unlikely that new orders will be filled until at least 2023. Well-heeled buyers may find dealers selling in-stock Lightning models with enormous “market adjustments,” if they’re willing to pay tens of thousands of dollars over the manufacturer’s suggested retail price.

This story has been updated to note that the R1T does have a drain plug in the frunk, to clarify what Driver+ is capable of, and to add additional detail about the size of the R1T’s bed with the tailgate down.

Stay on top of the automotive revolution and sign up for Jordan Golson’s free car reviews newsletter.

More like this
Innovation
17 hours ago
Prolific Tesla beta-tester reveals what Full Self-Driving 10.13 needs to fix
By Andrew Moseman
Innovation
8.18.2022 8:30 PM
Want to take a road trip in your electric vehicle? Prepare to go off track
By Molly Glick
Innovation
8.13.2022 9:00 PM
Want to buy an EV? Here’s what you need to know about the Inflation Reduction Act
By James Morton Turner and The Conversation
Related Tags
Share: