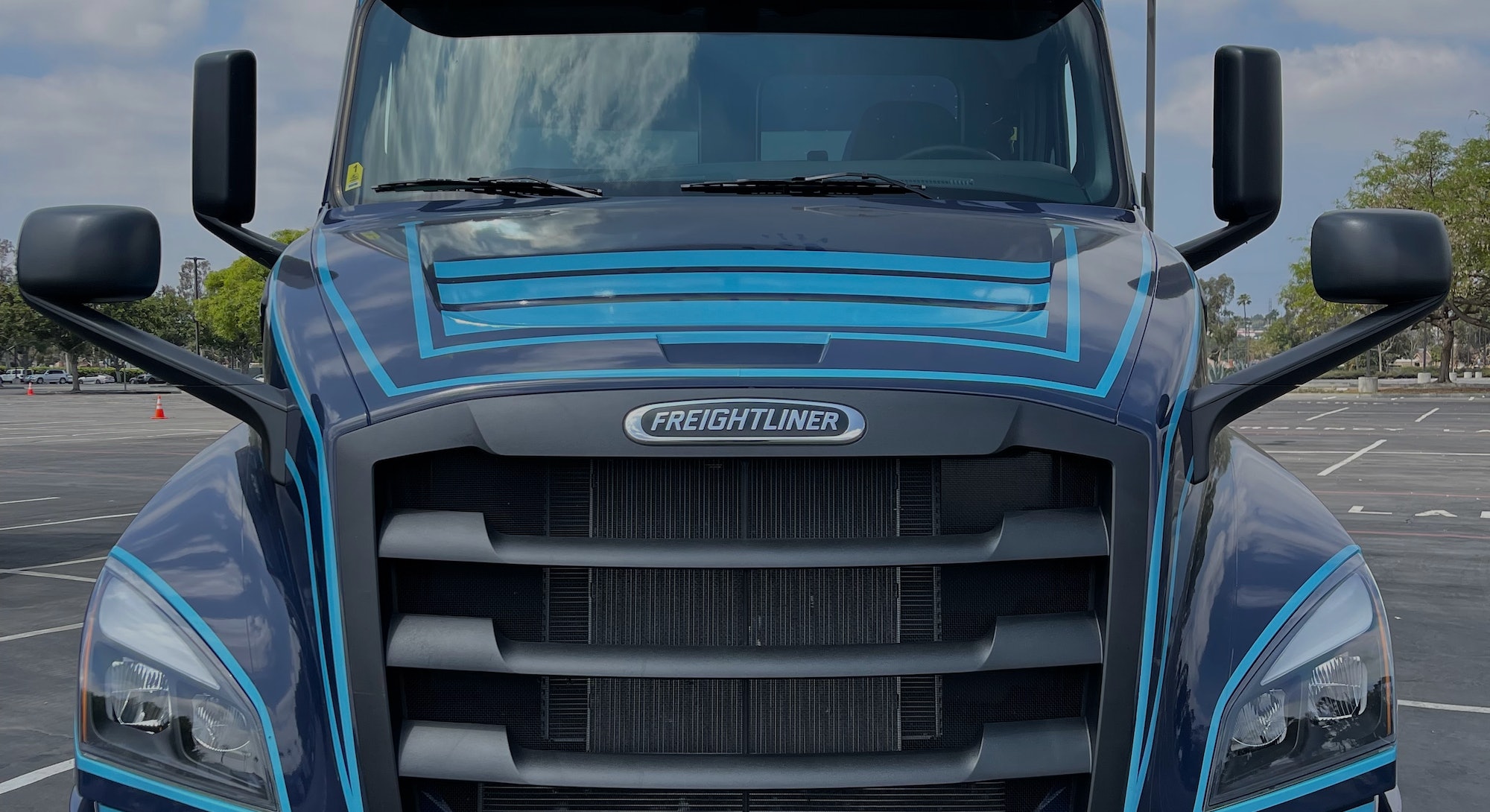 The most surprising thing about driving the giant electric trucks was the noise. Sure, the motors were mostly silent, just giving off the characteristic whirrrrrr-hummmmm that one expects from any EV. And the parking brakes did the standard, noisy-truck pssssh blow off when the bright yellow Bendix air brake release was pushed in.

What I didn’t expect was the incessant rattling.

Freightliner, which has some 40-percent of the big-rig market here in the US, is leading the way in developing electric tractor-trailer trucks. Sure, there’s the Tesla Semi, but development prototypes of Freightliner’s eCascadia truck are in the hands of customers right now.

Across Southern California and elsewhere, the rigs are hauling real cargo and giving off zero emissions as part of a test fleet to help identify and fix problems ahead of a commercial rollout of the electric truck. And after 800,000 miles, things seem to be going well.

The prototype trucks were in LA as part of a roadshow to get potential trucking customers excited about electric, and Freightliner was able to carve out some time to invite a few journalists behind the wheel. Because I don’t have the commercial driver’s license necessary to legally drive a vehicle with a gross vehicle weight rating (GVWR) of 26,001 or more pounds on the road, we met in the parking lot of the stadium where the LA Galaxy soccer team plays to take the trucks for a circular spin.

We began with the awkwardly-named Thomas Built Saf-T-Liner C2 Jouley electric school bus. Thomas Built, like Freightliner, is a subsidiary of Daimler Trucks and this electric bus is already on sale and being used to ferry kids at a number of school districts around the country.

It was like every school bus I’ve ever been in with a couple of exceptions: for one, it was clean. For another, it had seat belts for the kids that they may or may not actually wear. I jumped into the driver’s seat and fired up the bus.

Turning the key was a little anticlimactic. There’s a beep, the dashboard lights up, and then ... not much happens. But with a pair of button presses, I release the air brake and shift into drive and off we go.

If you’ve driven an electric car before you can probably imagine what happened next. The enormous bus, capable of carrying 81 passengers up to 135 clean, emission-free miles launched itself across the parking lot with the speed and agility of a massive bus half its size.

Thomas says the Jouley can go from 0 to 60 MPH in a blistering 49 seconds thanks to 295 horsepower and a 226 kWh battery. The powertrain in the bus is actually from Proterra, a company that specializes in large electric transit buses and in which Daimler Trucks is an investor.

DC fast charging allows the bus to charge up in around three hours (while the kids are at school, see) and the bus is vehicle-to-grid capable. Imagine using a school bus in an emergency situation to help evacuate a nursing home or to keep it powered in lieu of a generator, and you see the potential benefits here.

A school bus is actually one of the most perfect electric vehicles because they’re constantly stopping (and stop-and-go driving is the most efficient way to drive an EV because of the regenerative braking capabilities), they run fixed routes, and don’t generally drive long distances.

The Jouley has two drive modes depending on how much regenerative braking one wants, and, with a little practice, it’s easy to see how a bus driver used to stopping and starting hundreds of times a day could get really good at single-pedal driving. It likely wouldn’t be too hard to time things just right and stop precisely at little Timmy's feet, though, if my childhood bus driver was any indication, FULL SPEED AHEAD and STOOOOOOP are the only two drive modes that school bus drivers know.

One of the biggest benefits of the electric school bus, according to a public relations rep for Thomas, is the lack of engine noise — because it makes it easier for the driver to keep an ear on troublemaking kids in the back who might have previously had their exploits drowned out by a droning diesel.

But the bus really squeaked. I was told it was the window panes moving around against each other and was assured that it would be much less noticeable with a full load of kids on-board.

The red step van also has a powertrain from Proterra, fitted to a MT50e chassis from Freightliner Custom Chassis Corp. This is the sort of van you see a hundred times a day and to which you never give much thought: think UPS, FedEx, bakery delivery, or municipal utility vans.

Proterra and FCCC build the chassis and powertrain and then an upfitter like Morgan Olson can customize it however you want. Want a food truck or to make commercial laundry deliveries? They can make it happen.

One holiday season I worked as a driver helper for UPS. It was the hardest I’ve ever worked, climbing in and out of that brown truck more than 200 times per day slinging packages for a brisk New England December.

My UPS driver and I didn’t go very far in absolute terms and the 170-mile electric range of the MT50e would be more than enough for many delivery routes, not to mention being a heck of a lot quieter in the suburban subdivisions that we spent most of our time in.

The step van drove like any other I’ve driven, only electric. And perhaps the most surprising thing about it was how utterly boring it was. Yes, it was electric. But you’d barely notice it unless you popped open the fuel filler cap on the side and saw the electric charge port sitting there.

And golly, did it make a lot of rattles and bangs. Commercial trucks aren’t known for Rolls-Royce levels of quiet refinement, but this was something else. Still, it’s nothing turning up the radio can’t fix.

The eM2 is a top-to-bottom Freightliner product, using a powertrain and battery system developed in-house at Daimler. Featuring an (up to) 315 kWh battery pack, the truck can go as far as 230 miles on a charge depending on the configuration. These medium-duty trucks might be used for things like furniture delivery or other types of local warehouse-to-destination routes.

And like with the step-van, the biggest advantage to this truck is for those outside it rather than in. It’s alarmingly, extraordinarily quiet. Setting off, the only sign that it’s about to move is the psssh of the air brakes releasing. It does have a noisemaker, like all EVs do these days, but it’s far, far quieter than a diesel truck of this size would be. A Manhattan full of EV trucks would be such a different place, it’s scarcely possible to imagine what it would sound like.

At the risk of repeating myself, driving the eM2 is a wholly unexciting enterprise. It takes off with an unexpected amount of thrust and the regenerative braking is just as impressive. But, the entire experience was so normal. And that’s the idea, of course.

Electric trucks are supposed to be easy, with no significant learning curve for delivery drivers. Because fleet trucks are typically replaced one at a time, drivers might be on an electric truck one day and in a standard internal combustion one the next. If the trucks didn’t drive nearly identically, this could be a problem. Instead, the cab is identical between the two, right down to the automatic transmission and the key to start it up.

But I was here to live out my Smokey and the Bandit fantasies with the Class 8 Freightliner eCascadia. This is a 525 horsepower beast that can go up to 250 miles thanks to a 475 kWh usable capacity battery that can recharge to 80 percent in just 90 minutes on the right DC fast charger.

Freightliner has 28 of these in the hands of real customers in Long Beach and beyond, hauling goods for big trucking companies like JB Hunt and Schneider National. These companies buy trucks by the thousands, so impressing them is essential to a successful EV transition. The environmental benefits are certainly important, but so is having reliable trucks that keep deliveries on schedule and on budget.

And driving it was awesome.

Sure, it was in the parking lot of a soccer stadium in LA, but I was behind the wheel of a big rig weighing some 60,000 pounds between tractor and trailer. A gentle prod of the throttle sent us rolling along, without any strain or lurching. I’ve ridden in 18-wheelers before and I couldn’t quite put my finger on what was different at first, but then it hit me: there are no gear changes.

Drive next to a semi-truck setting off from a stoplight and it’s a repeating refrain of vvvvrrrMMMMMMMMMMMMMvvvvvrrrrMMMMMMMMMMM as the truck revs up and down the power band, changing gears over and over and over. The eCascadia has only two gears, and thanks to the always-available torque, the second is only used at highway speeds.

The truck pulls away smoothly and cleanly and stops the same way. It’s certainly not fast, but it wouldn’t be maddeningly slow in stop-and-go Long Beach traffic either.

I’m not sure what I was expecting, but the whole experience was incredibly ordinary. Sure driving a tractor-trailer was fun, but that’s not because it was electric.

The trucks were as advertised: clean, quiet, and ready to get to work — even if they are a bit rattly.

The Freightliner Mt50e goes into production late this year, while final versions of the eCascadia and eM2 will start hitting fleets in late 2022 or early 2023.