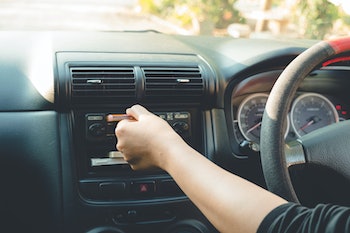 If your car or favorite vintage boombox is outfitted with a cassette player, the best Bluetooth cassette adapters can turn a cassette player into a Bluetooth speaker with this one handy device — as you shop, you’ll need to consider the system you’ll be using the adapter with and any specific audio features you might need. These adapters allow you to stream your favorite tunes, podcasts, and audiobooks without using any cords or having to replace the dashboard entertainment systems you already have in place.

How does a Bluetooth cassette adapter work?

Bluetooth cassette adapters work by placing Bluetooth components in a tape deck shell. When it’s placed into a cassette player, magnetic inductors that would normally play the roll of tape in a traditional cassette are used to stream whatever music you choose wirelessly. In short, after you insert the cassette adapter, it allows you to connect it to your phone or other streaming device, and play whatever you’d like.

How to choose the best Bluetooth cassette adapter for you

There are a few things to keep in mind as you shop for the best Bluetooth cassette adapter for your situation.

In a hurry? These are the best Bluetooth cassette adapters:

Here are some of the top Bluetooth tape deck adapters you can snag on Amazon — as well as a couple of other cassette and Bluetooth adapter options — to help you utilize modern streaming technology while using your older devices.

1. A reviewer-loved Bluetooth cassette adapter for a car or boombox

This Bluetooth cassette adapter is a crowd-favorite with a 4.1-star overall rating from over 2,700 ratings and counting. It has a 33 foot Bluetooth radius, so you can connect from the back row of even the largest vehicle. The adapter comes with a USB charging cable, and it helpfully kicks into sleep mode after 5 minutes of inactivity to preserve its battery. Best of all, since it has no antenna, you can use it in any cassette player without a wire getting in the way.

One reviewer wrote: “After purchasing a similar product that didn’t work, I ordered this Aluratek cassette adapter, hoping it would be different. It is. It works beautifully. Instantly turned my 80’s boombox into a bluetooth machine. Highly recommended. Don’t bother with the other (cheaper) bluetooth adapters on Amazon. Get this and you’ll be happy.”

Battery life: 8 hours | Charge while playing: No | Antenna: No

2. A Bluetooth cassette adapter under $25

At just over $20, this Bluetooth cassette adapter is the most budget-friendly option on this list, while still offering a mic to take calls and a lengthy eight-hour battery life. You can use the Bluetooth receiver’s buttons to control the volume, skip tracks, and pause and play your music, and it comes with a USB cord to recharge.

One reviewer wrote: “Easy to use. Good sound quality. Nice price. Just what I needed to listen to my podcasts in my husband’s 18-year-old car.”

3. A Bluetooth cassette adapter that can play music while it’s charging

This Bluetooth cassette adapter is the perfect pick for anyone who doesn’t want to worry too much about keeping it charged, as it can play music while charging. It comes with a USB cable and if you’re planning on charging while playing, a 12V USB port could make a great add-on. But if you do want to utilize its battery, you definitely can. While a battery life isn't listed in the product description, one reviewer wrote that “it’s in the 4-6 hour range before it needs to be charged.” Its Bluetooth receiver can also be used to control the volume, skip tracks, and pause and play your music.

One reviewer wrote: “Our 2000 Honda Accord only has a tape player so this adapter is such a gem that I’m ordering another just in case. The sound quality while talking on the phone is fairly good and the pandora music sounds great! We found it easy to use.”

If you’re someone who’s into the idea of using a cassette adapter to play music but doesn’t mind a few wires, a cassette-to-aux adapter could be a better fit for you than a Bluetooth one. I personally used a cassette-to-aux adapter in my car for years and found it to be incredibly reliable. This specific one even has a 4-star overall rating after a staggering 17,000 ratings and counting. To use, all you need to do is insert it into the cassette player, plug it onto your phone (or a headphone adapter dongle for your phone if needed) and start playing.

One reviewer wrote: “Was very sad that my car only took cassettes but this basically saved it, works very well and surprisingly easy to use.”

Another option for playing music wirelessly in your car is a 12V port Bluetooth adapter. They plug directly onto your car’s cigarette lighter and connect your phone to Bluetooth utilizing your car’s radio. I’ve also used a 12V adapter like this one, and while connecting your phone to one can be a little tricky when driving very long distances where radio frequencies might change, they can work really well in a smaller radius around town. It also doubles as a phone charger and has two USB ports, and it’s able to take calls with a built-in mic.

One reviewer wrote: “I absolutely LOVE ours! Our Acadia didn’t have a smart speaker or bluetooth capability, so this has been a lifesaver. No one wants to listen to ALL the adds on the radio. So I love that we can connect this and put on our preferred music, or podcasts!”

Rachel Dunkel is a commerce writer whose work regularly appears on sites including Bustle, Elite Daily, Mic, and The Zoe Report. She has four years of experience in sourcing, testing, and recommending products in a wide range of categories, including tech and travel products.