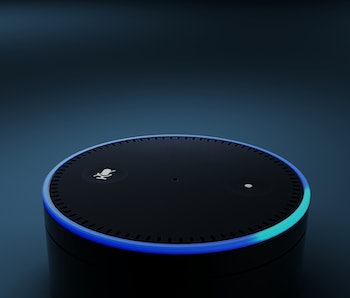 If you've not had a smart speaker in your home before, It's OK to feel slightly creeped out by the idea that it might be secretly listening to their conversations.

Last year, Bloomberg broke the news that Amazon's Echo speakers were surreptitiously recording parts of people's conversations to improve the speaker's functions. If that wasn't creepy enough, new research shows how smart speakers could figure out where you are in your house, too.

VoLoc — Researchers at the University of Illinois at Urbana-Champaign have developed a system called "VoLoc," which is getting close to being able to determine where someone is in their home using Alexa. The system relies on listening to how their voice echoes off the walls of their home. The idea is that this would allow Alexa to know which room you're in when you ask it to turn on a light or adjust the thermostat, for example.

Sheng Shen, a graduate student who worked on the research, used reverse triangulation to develop this system. You can see how it works in the image below.

The researchers haven't perfected it, but they're getting close. Shen said in a statement that perfecting it isn't easy.

"Applying this technique to smart speakers entails quite a few challenges," Shen said. "First, we must separate the direct human voice and each of the room echoes from the microphone recording.

"Then, we must accurately compute the direction for each of these echoes. Both challenges are difficult because the microphones simply record a mixture of all the sounds altogether."

How it knows — VoLoc's algorithm figures out where the echo of the voice came from and determines where the person would have to be to create that echo. Roy Choudhury, an electrical and computer engineering professor who worked on the research, said in a statement that this technology could greatly improve Alexa's capabilities.

"The implications are important," Choudhury said. "Location can help Alexa in improving speech recognition, since different speech vocabularies and models can be loaded. For example, a command like 'add urgent to the shopping list' may not make sense, but if Alexa knows that the user is in the laundry room, Alexa may be able to infer that the user actually said `add detergent to the shopping list'."

Shen and Choudry aren't oblivious to the fact there are privacy concerns here. They simply believe the capabilities this could allow are important and worth pursuing. They explained that this system could allow Alexa to help the elderly by doing things like reminding them to take their medication when they pass the medicine cabinet in nursing homes. They're planning to continue working on perfecting this system. Shen said they're hoping to continue improving the smart speaker's "frame of reference."

As we reported in September, Alexa won't only be staying in people's homes. Amazon is putting Alexa in smart glasses, and the company claims it will prioritize people's privacy, but not everyone trusts that the company will. Alexa is also being put into a smart ring. It seems we soon won't be able to avoid Alexa even if we don't own one because people around us in public will be wearing Alexa devices.

When it was revealed Amazon was recording parts of people's conversations and holding onto the recordings indefinitely, it didn't seem like Amazon felt remorseful about it and was prioritizing people's privacy.

With Alexa being put into even more products and it soon possibly being able to figure out where people are in their homes, one would hope Amazon would make a bigger commitment to protecting people's privacy. In the meantime, maybe watch what you say around these products.

More like this
Innovation
8.5.2022 11:00 AM
Alexa could diagnose Alzheimer’s and other brain conditions — should it?
By Joanna Thompson
Innovation
8.11.2022 11:00 AM
“Quantum materials” could give the human brain a run for its money, scientists say
By Nathaniel Scharping
Innovation
22 hours ago
This high-tech camera may help protect our identities — here's how it works
By Molly Glick
Related Tags
Share: