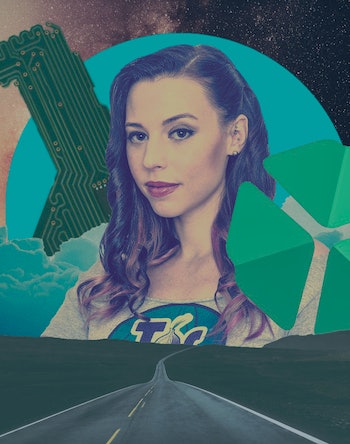 In December 2017, the owners of a small beverage company in New York called the Long Island Iced Tea Corporation made an announcement: They would be changing their name to the Long Blockchain Corporation. They were still a beverage company, they clarified. In fact, they were only in the “preliminary stages” of exploring how blockchain could improve its business. And still, the stock soared 200 percent.

Perched at the vanguard of blockchain’s innovators, it was exactly the kind of over-covered story that you’d think would frustrate the programmer turned chief executive Amber Baldet.

At the time, Baldet was the blockchain lead at JP Morgan, one of the most prestigious banks in the world, tasked with figuring out how financial institutions might be able to use technologies like the blockchain to settle trades, say, or custody cryptocurrency.

The Long Blockchain Corp. was exactly the kind of story that, at times, made the industry seem like a caricature. But for Baldet, there are no hard feelings about the bubble and the shady opportunism it attracted, and, eventually, unmasked (in LBC’s case, via subpoena).

“I mean, it was great for us,” Baldet, who left JP Morgan last spring to launch her own startup Clovyr, tells Inverse. “We were saying from the beginning, you don’t need to get 10 institutions around the table with a bunch of lawyers, and then decide that you’re going to move a supply chain onto a blockchain — before you write a line of code.”

It is a little difficult to describe what Baldet does. The goal, she explains to me in a Brooklyn coworking space filled largely with non-profits (“like WeWork but without the assholes,” she jokes), is to rapidly advance the development of decentralized products and tools, which is another way of saying products that aren’t owned by any one entity. The famous blockchain, as a system for recording transactions digitally and peer-to-peer, is only one way that these future products and tools could be supported and maintained.

See also: What the Early Internet Taught Me About the Power of Creativity

When she first announced the project, many, including Coindesk, drew comparisons to Apple’s App store — but decentralized — using the moniker “Dapp store.”

This isn’t quite the case anymore, she says, describing the double-edged sword of early media attention. Most startups figure their business model out in a broom closet or suburban garage. But this luxury was not extended to the purple-haired, tattooed, Dr. Martens-wearing Baldet, whose decision to set out on her own from one of the most visible jobs at the intersection of finance and technology was instantly scrutinized.

“A Dapp store is certainly not a bad thing to make people think that you’re working on, but it’s not exactly what we’re working on,” Baldet says. “We’re helping make some of the best technology more available to help people solve problems that they think they need a lot of enterprise blockchains for.”

The most famous blockchain application is obviously bitcoin — use the blockchain to record and verify payments instead of the layers of intermediaries like banks.

But what seems to excite Baldet most is the potential to use decentralized technologies to alleviate privacy concerns, and the steady escalation of surveillance capitalism that, over the last 20 years, has turned people’s data into products, monetized it extensively — sometimes without their knowledge — and has begun to pose a real threat to our institutions.

In her new book, The Age of Surveillance Capitalism, scholar Shoshana Zuboff warns that as companies continue to get better at surveilling us and “gleaning insights,” they will also continue getting better at invisibly manipulating and coordinating our behavior.

Decentralization and distributed systems may offer us an antidote: What if we could find a way to aggregate and study data, recognize patterns, and make predictions without being so intrusive? There may be a false comfort in numbers, Baldet says. People are more “fingerprintable” than we think.

But even these experiments, she says, are in their early stages (ask where Clovyr will be in five years, for example, and she’ll demure). With the madness of the bitcoin bubble behind us, and the quick money made, the good ideas are only just now coming to the fore.

In fact, the common observation that blockchain is currently in the same stages as software was in the early 1990s may have even been one generation ahead of itself: “I’m really waiting for the entire next generation of these sorts of projects that aren’t started because someone said it’s blockchain month and we need a blockchain stat,” she says.

It’s a more complicated, nuanced thesis than “hop on blockchain train or get left in the dust.” But it’s also clear-eyed and sensible.

If decentralization is indeed going to change the world — as many brilliant people besides Baldet also believe — it will do so with an approach like this.