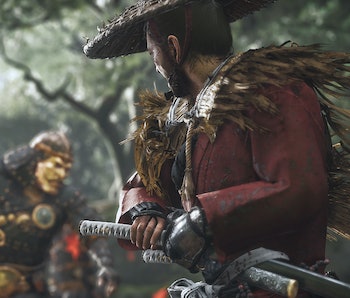 Gamers had some tough decisions to make in 2020. Some of the year’s best games presented some existential choices that pushed well past the normal “good and bad” binary. That was no truer than in Ghost of Tsushima, which concludes with one of the most challenging choices I’ve ever made in a game.

We asked our readers what they thought was the hardest choice they had to make in a game this year was and they overwhelmingly agreed. Ghost of Tsushima’s ending took the cake with nearly 40 percent of the vote and it's easy to see why if you’ve made your way to the end of Sucker Punch’s open-world samurai game.

We’re going to get into heavy spoiler territory for the ending of Ghost of Tsushima here, so be warned before continuing on below.

Ghost of Tsushima tells the story of Jin Sakai, a samurai who’s fighting to protect the island of Tsushima from a Mongol invasion. The game heavily revolves around the idea of honor with Jin constantly deciding if he’s going to betray the samurai code by sneaking in the shadows to kill enemies rather than facing them head-on. That mostly plays out through the game’s interplay between stealth and hack-and-slash action.

That internal conflict eventually comes to a more emotional head in the game’s final moments. The story ends with a duel between Jin and his uncle Lord Shimura, who has ordered his nephew’s execution. Jin emerges victorious, but that’s where a paralyzing choice arises; you’re asked to either spare or kill your uncle.

This isn’t your simple black-and-white option where killing is evil and showing mercy is good. Lord Shimura demands that you finish him, because that's the honorable thing to do in samurai code. Sparing him may seem like the morally right path, but the player is ultimately refusing to give him a warrior’s death in doing so. It’s a complete inversion of how games have trained us to see moments like this and that makes it more challenging than any fight in the game.

When I hit the dialogue choice, I had to put the controller down. Usually, I don’t think too hard about my choices in games. If I’m roleplaying properly, I know exactly how my character is going to respond to a situation and can fire off the right line within a few seconds of reading the options. This was different. I found myself spending a few minutes pacing around my apartment trying to recall exactly what my internal logic had been throughout the game. I refused to use stealth in my playthrough, so I had successfully stuck to my code for the most part. But should that same logic apply to the loved ones I’d just fought to save?

Eventually, I chose to spare him, trying to convince myself that I had the moral high ground and wasn’t just choosing a cowardly cop-out that further betrayed my uncle’s wishes. I still don’t know if I made the right decision.

What’s so effective about Ghost of Tsushuma’s storytelling is that it properly ties gameplay and theme together in a meaningful way. The game doesn’t just explain 13th century honor systems to the player in an exposition dump. It illustrates that through the gameplay itself, letting players feel the weight of every assination or standoff. It’s a game about respecting traditions, but knowing when it’s time to let the old guard die and adapt to the times. At the end of my playthrough, maybe I just yearned to be the change I wanted to see in my own world.

Other 2020 gaming decisions weren’t quite as heady, thankfully. Our readers said that their other tough choices this year were which character color to choose in Among Us and which island layout to pick in Animal Crossing: New Horizons. Of course, those are perfectly tricky decisions in their own right for the kind of perfectionists who have trouble choosing their mini golf ball color (mine’s red, for the record).

No matter how big or small the options are, choices are what makes video games such a compelling medium with unique storytelling potential. Ghost of Tsushima’s finale just wouldn’t have landed the same way without a player making the final call and shaping their own takeaway. A movie adaptation would have to make the choice for me, and that’s what actually feels like the coward’s way out.

More like this
Gaming
6.21.2022 4:27 PM
Everything you need to know about Crisis Core: Final Fantasy VII Reunion
By Hayes Madsen
Gaming
6.17.2022 4:00 PM
The agony and ecstasy of PlayStation trophy hunting: "It's a huge drop of serotonin”
By Joseph Yaden
Gaming
6.25.2022 2:00 PM
You need to fight the best video game villain ever on PlayStation Plus ASAP
By Mo Mozuch
Related Tags
Share: