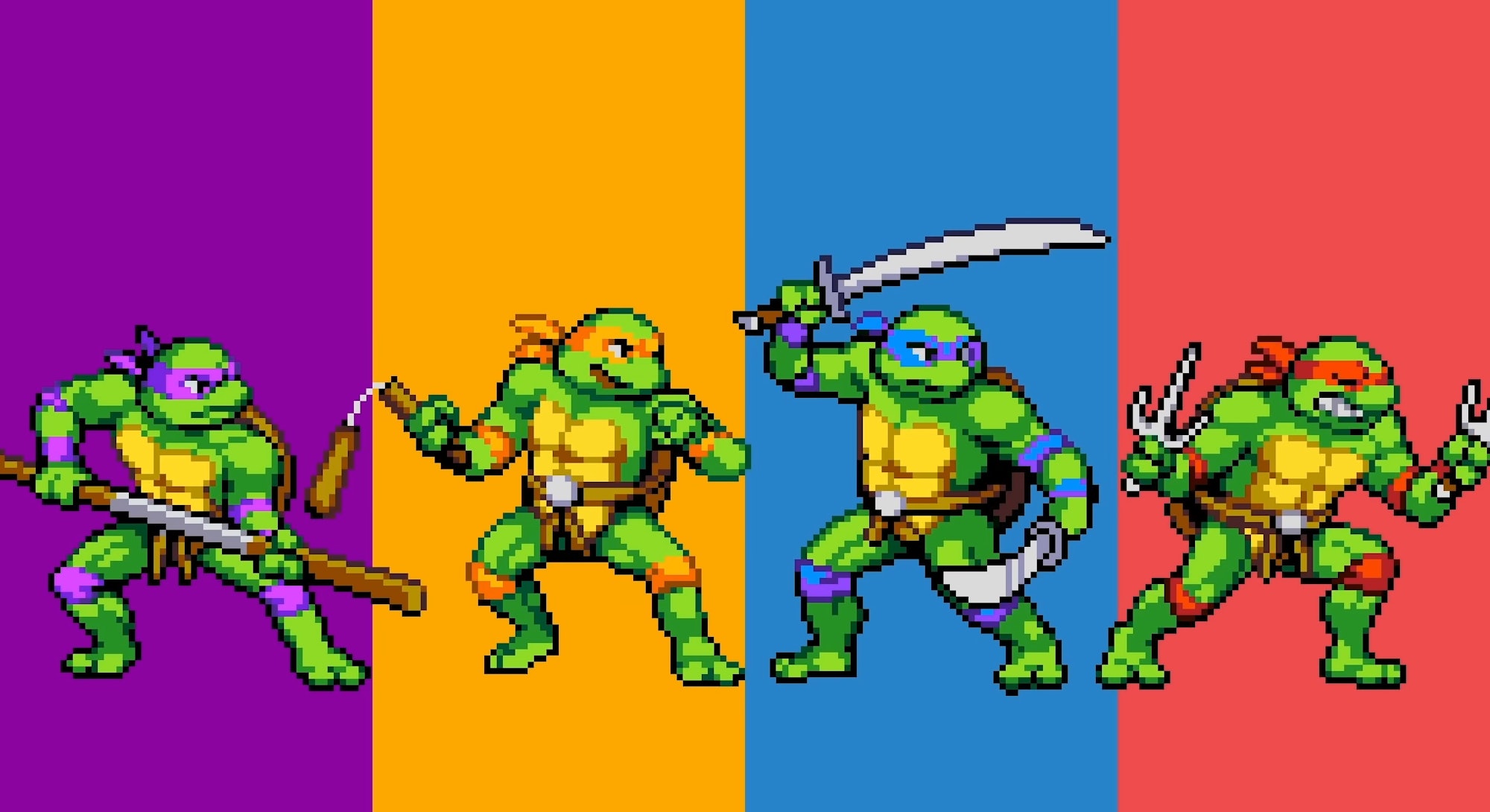 From Hollywood reimagining beloved cinematic icons, to ’80s and ‘90s fashion seeping its way back into closets, our media is tethered to a retro hype train that shows no signs of slowing. Yet where TV and film’s rose-tinted railcar left the station long ago, there’s one stretch of track that’s only just being laid – ‘90s arcade games. Yet, there’s a simple reason for the relative lack of arcade remasters: many of these games simply don’t hold up.

It’s a fact Parisian porting house Dotemu and Canadian arcade revivalists Tribute Games know all too well. For the past ten years, these two companies have been on a mission to reimagine arcade classics for a modern audience. And on one fateful day in 2020, a shared passion for four heroes in a half shell saw their worlds collide.

Despite operating on different sides of the planet, the two companies suddenly found themselves both pitching their dream TMNT side-scroller to Nickelodeon. Thanks to the success of Dotemu’s Streets Of Rage 4 and Tribute’s involvement with Scott Pilgrim, these two troupes of Turtle obsessives were the perfect choice for reviving an arcade classic. For both companies, TMNT: Shredder’s Revenge isn’t simply an exercise in nostalgia — it’s about reimagining their childhood for a new generation.

Ahead of the launch of TMNT: Shredder’s Revenge, we sat down with Dotemu’s Adrien Marie and Tribute Games Eric Lafontaine, who revealed how they made their inner children proud with the gnarliest-looking arcade revival yet.

For these two Turtleheads, the goal was to create the game they remembered in their heads, not to emulate a dated and disappointing reality. It was time to do their half-shelled heroes justice.

“I have such amazing memories of that ‘90s TMNT game. But when you play it now, it just feels old,” says Lafontaine.

“There were a lot of ‘holy shits’ and happy swearing.”

Trusted with porting classics like Final Fantasy VII and SNK fighters to Steam and PS4, Dotemu has earned a sterling reputation for understanding the classics. Yet simply preserving the past wasn’t enough.

“[Dotemu CEO] Cyrille Imbert said he wanted to go the extra step and create new games based on retro IP, which started with Streets of Rage 4,” Marie tells Inverse.

Teaming up with developer LizardCube, Dotemu released the first Streets of Rage game in over 25 years to critical acclaim. Thanks to its stunning art, scaling difficulty, and thoughtful approach to multiplayer, it didn’t just emulate the original brawling experience — it improved on it.

Meanwhile, thousands of miles away in Canada, two men found themselves dreaming of resurrecting their childhood arcade obsession. At Ubisoft Montreal, Jonathan Lavigne and Jean-Francois Major channeled that energy into the 2010 cult classic Scott Pilgrim vs. the World: The Game, a modern reimagining of classic arcade stand-ups. The studio later shifted direction to massive AAA titles. From the ashes, the duo formed the retro-leaning Tribute Games. With original IP like the 2014 sidescroller Mercenary Kings, the studio quickly found success. Yet the lure of the heroes in a half shell remained.

Turns out, the missing ingredient was Dotemu. The company’s CEO heard Tribute Games was also working on a pitch for a similar TMNT game — so they teamed up and approached Nickelodeon together.

“It was that perfect storm. We came at the same time, and the magic happened,” says Lafontaine. Somehow, after a decade of pitching, both teams were finally making TMNT: Shredder’s Revenge.

“There were a lot of ‘holy shits’ and happy swearing when they announced that we had the rights for this one,” says Marie.

It was time to get to work. Luckily, Shredder’s Revenge was something these teams had been prepping for all their lives.

“We all grew up watching the cartoon. We did all the research when we were 12 years old,” says Lafontaine. “We already knew what references we needed to put in the game to make that classic experience.”

A key challenge for both teams was to make sure that Shredder’s Revenge evoked the nostalgic feelings of the arcade classics, while standing toe-to-toe with modern rivals.

“The real deep turtle fans will get something out of this.”

“Initially, we had that idea that retro games needed to be hard… like, retro hard,” says Lafontaine.

Dotemu, however, wanted to make a game for everyone. Tribute initially balked at the idea, but soon realized the result was infinitely more enjoyable.

“Minimizing frustrations and putting emphasis on the couch co-op and the multiplayer experience really took the game to another level,” says Lafontaine.

That doesn’t mean Shredder’s Revenge is a pushover. While the core story mode lets players tackle the action in a more gentle manner, the arcade mode is a nod to TMNT’s quarter-guzzling origins.

Nailing the core gameplay loop was essential, but the teams also sought to elevate the experience with careful attention to fine details crafted with Turtles superfans in mind. With Shredder’s Revenge featuring the original opening banger from the cartoon, and almost all of the voice actors from the ‘87 cartoon, the result is close to nostalgic perfection.

“The most wonderful aspect, on my end, is the quality of the animations,” says Marie, “When we went to PAX in Boston, it was amazing to see the reactions of people playing for the first time. The soundtrack we have from Tee Lopes — who scored the soundtrack for Sonic Mania — is one for the ages, too.”

“There are Easter eggs everywhere in the game, even in the music,” Lafontaine says proudly. “The way Lopes took references from the ‘87 cartoon and created these amazing tracks with great references… there's so much care! There are even references for collectors of the original toys. The real deep turtle fans will get something out of this.”

From what we’ve played of the game so far, it seems like your childhood is in safe hands.