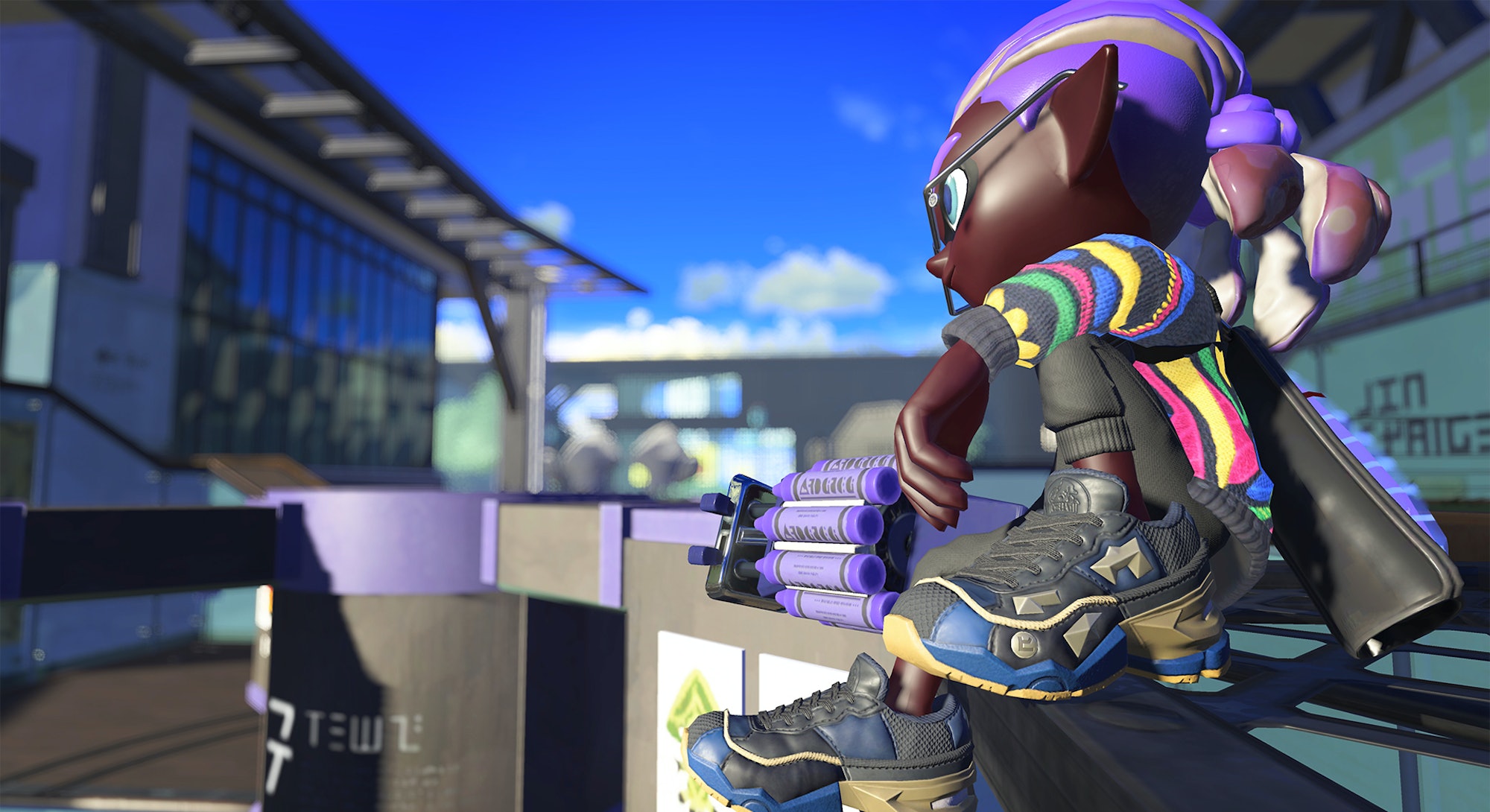 Splatoon has always been a sexy game.

That’s not an adjective often associated with Nintendo’s output, unless well-honed design and extreme levels of polish get you excited. But everything surrounding this world, built up from nothing a mere seven years ago and twice iterated into its current form, is supremely confident. The genre deconstruction of a third-person shooter that replaces bullets with cephalopod ink is evidence of a team that feels assured in its decisions.

Splatoon 3 makes players feel confident too, thanks to an ever-expanding wardrobe and limitless customization. You’re also empowered by a simple, yet brilliant design conceit: You do not miss. Even when your ammo falls on the ground, you are hitting a target. It’s a rare example of a concession to newcomers and inexperienced players that doesn’t patronize. Instead, it takes the limitation of a choice based on accessibility and inclusion and builds that limitation into the very fabric of the experience — and the game is better for it.

But the real reason you feel good playing Splatoon is that you look good. The clothes make the (wo)man, as they say. The same applies for squid-children and octo-people. Splatoon 3 builds on the street-culture cool showcased in the first two games and refines it into what feels, arguably, like the real purpose of the game: unlocking the freshest fits you can.

The emphasis on style extends to the creators themselves. In a recent “Ask the Developers” interview, producer Hisashi Nogami and members of his team all dramatically took off their jackets, revealing t-shirts your character can wear in Splatoon 3.

In a way, this is an industry-wide phenomenon: all I know of Fortnite for the past two years is that yes, you can now look like Deadpool and Master Chief and the Xenomorph from Alien amidst dozens of other limited-time available skins. Cosmetic skins are the standard operating procedure for how free-to-play games make their money and keep people interested. In most games with such extensive cosmetic tidbits for unrealistic prices, you’re given the chance to pay with real-world money. Why grind for dozens of hours when you could drop a few bucks and move on? At least Splatoon 3 keeps its economy fully within the world of squids and kids. Dollars and cents? They have no place here in the Splatlands. (At least after the MSRP of $59.99, paid by one of those strange mammals out there beyond the screen.)

The term used is instructive: “Skin” implies a covering over your entire character; your Splatoon avatar just nabs some slick jackets from the mall. This latest Splatoon game has made good on the promise of the original’s very first on-screen image: A glimpse at an inkling's fashionable apartment. Alas, this was always just an inert splash screen. Now you can finally inhabit a small plot of land in this bizarre world and make it your own.

The new Locker feature is the answer to the question, “What if Animal Crossing, but limited to a tiny 2’ by 6’ box?” Nobody asked that question. Not one fan of Splatoon likely put on their wishlist for added sequel features, “Trophy Case with realistic physics.”

And yet that’s what players are given. Want to hang your favorite t-shirt? You first need to install a hook. Want to stack a pile of shoes? Unless the weight balance is perfect, they will teeter and topple over. At first I found the surprisingly realistic constraints a total pain. My initial attempt at decorating this miniature space ended in frustration; I couldn’t place anything I wanted and barely had anything interesting to display, anyway.

So I popped into the new store Hotlantis (a portmanteau of Atlantis and “Hotlanta,” the term for Atlanta that nobody actually uses who lives in the city the same way nobody actually living in Boston calls it “Beantown”). Now I could cash in all my earnings for something exciting and representative of my unique personality, something like… a metal ladder. Or cardboard boxes. (More shades of Tom Nook; indeed, several members of the Splatoon team have also worked on Animal Crossing.) Then I spy something slightly interesting–a sci-fi magazine culled from the made-up culture of Inkopolis–only to see the not-interactive JPEG is 10,000 coins. I barely had 3,000 and had been playing for hours.

(ProTip: Play through the solo campaign and you’ll unlock lots of statues and baubles and toys for your locker, if you’re into that sort of thing.)

Even so, I find myself sauntering over to Hotlantis to chat with bored teen inkling Harmony, check out the shelves, and invariably buy a book or decal or spray-on patch of graffiti. It’s an odd inclination, the desire to spend digital money on digital stuff that can only go on one very specific bit of digital real estate. But this is not new to Splatoon 3.

Nintendo seems to be leaning into the allure of digital duds more with each successive generation. Witness the evolution of Wii Sports. The 2006 pack-in was massive, no doubt in part due to the incredible charm of their Miis. You were, finally, in the game. But they were not the most fashionable avatars, what with a choice of eight different colors for their chunky monochromatic t-shirt / dress.

Sixteen years later, the raison d’etre of Switch Sports is not local multiplayer with grandma but to facilitate an ever-increasing wardrobe of ludicrous costumes for your racquet-swinging “Sportsmates.” Play enough online matches and you unlock fancy hats, neon athleisure, earring studs, cheek stickers, zip-up pajamas, and the ability to transmogrify your body into a squirrel or shark.

Nintendo’s desire to satisfy a player’s stylish inclinations goes way back. The most prominent example is the Animal Crossing series, which debuted on the GameCube in 2001. It’s the kind of game where furniture and clothing and wallpaper take up your inventory the same way swords and magic spells do in more traditional RPGs. In a similar vein, Tomodachi Life and its spiritual successor Miitopia took the “Mii” character and gave it the digital dollhouse it yearned for since the Mii Maker channel. Before that came the suite of programs called Talent Studio, exclusive to Japan’s infamous 64DD disk system upgrade to the Nintendo 64. There was even a Knitting Machine prototyped for the NES that never came out.

Most modern games employ upgrades and cosmetics as carrots, dangled on a stick to entice players to spend more money or time on a game. But Nintendo’s recent shift in emphasis feels more like a parallel path rather than a shiny object on the horizon. Better clothes are more than an incentive to play more — they’re the end goal of certain users. For them, Turf War is not the main mode of Splatoon 3, but a messy nuisance required to access more sweet rags.

As I knock the rust off my tentacles and reignite my interest in all things Splatoon, I remember something: I am bad at this game. But I can’t stop spending time here, if only to buy another holographic sticker or unlock a particularly fetching pair of flip-flops.

Cult of Nintendo is an Inverse series focusing on the weird, wild, and wonderful conversations surrounding the most venerable company in video games.