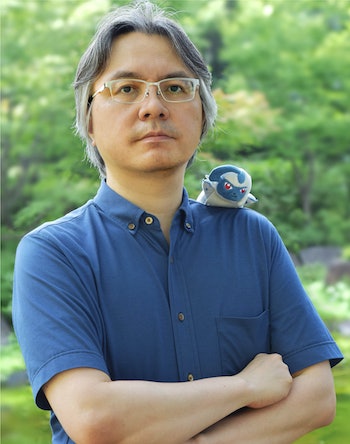 From his early days programming PS2 classic SoulCalibur II to working his way up to director of Soul Calibur V, Hoshino has built a career perfecting pixel-based pummelling in fighting games. Yet he was quietly smitten by a more wholesome gaming franchise – Pokémon.

Speaking to the legendary creator at this year’s Pokémon World Championships in London, Hoshino tells Inverse how he went from sculpting a tale of souls and swords, to creating the Pokémon games of his dreams.

“Back in the days working at Namco, within the company I created a Pokémon department in order to host all kinds of different events,” Hoshino-san says with a wry smile.

Falling in love with Pokémon Yellow on the Game Boy Color, Hoshino found himself enthralled its battle system. The game became Hoshino-san’s escape from life’s problems – a piece of playable solace. While his day job saw him carefully curating close-quarters combat, on his lunch breaks he hosted inter-departmental Bandai Namco Pokémon tournaments. His passion didn’t stop there — he won official Pokémon Trading Card Game championships in his homeland of Japan, eventually passing the notoriously difficult TCG ‘Pokemon Professor’’ exam. As the public face of Soul Calibur tweeting out news for the franchise, it wasn’t long before his Pokémon-centric extracurricular activities got noticed.

“Eventually, my enthusiasm made its way to the president of the Pokémon Company, Tsunekazu Ishihara,” Hoshino explains. “Around the end of 2013, because of my love for Pokémon, Ishiara asked me to make a new fighting game called Pokkén.”

It was the invitation he’d been waiting for. “I’d wanted to make a Pokémon action game since around 2010 — and I felt that with my fighting game production know-how and my love for Pokémon, I would be able to make this a reality,” he says.

It's no surprise that Hoshino was already on Ishirara’s radar. Over the Wii U years, Bandai Namco and Nintendo developed a strong collaborative relationship, with the former assisting on development duties for massive releases like Mario Kart 8, Arms and Super Smash Bros: Ultimate.

Much to his surprise, Hoshino’s favorite hobby had become his career.

“It was very exciting,” Hoshino grins. “My wish had come true.” His first task was to formulate a plan to create the Pokémon beat ‘em up he’d always dreamed of.

“I’d wanted to make a Pokémon action game since around 2010.”

“Given my experience in fighting games, I am very particular about the movements of Pokémon [in-game]. During my time at Bandai Namco, we specialized in creating animations that appeal to players,” he says. “Pokkén makes use of this know-how to create interesting motions that bring out the uniqueness of each Pokémon.”

Hunkering down for three years in secret, Hoshino and his team at Namco spent their time flitting between trial and error, tirelessly working to lay down the groundwork for a fighter worthy of the Pokémon name.

Hoshino’s hard work paid off. Launching on the ill-fated Wii U in 2016, Pokkén Tournament was a critical success. Borrowing elements of Bandai Namco’s other major fighting franchise – Tekken – Pokkén’s unique twist of assist characters and blend of 2D and 3D brawls was unlike anything else. Yet while Pokkén rapidly earned a devoted cult following, Nintendo’s floundering Wii successor was all but dead. For a moment, it seemed like Hoshino’s first foray into the Pokémon world might be his last.

Like any good Pokémon trainer, Hoshino rose to battle once again. Soon after Pokkén’s release, he learned that Nintendo had some intriguing new hardware in the pipeline.

“After the Wii U version of Pokkén was released, I started researching the technology available on the Nintendo Switch as soon as I got my hands on a development console. Having hardware that can be used in any situation was very appealing,” he says. “I was the technical director for engineering at the time, and I wanted to port the game to Switch so that I could deliver these fascinating Pokémon battles to as many people as possible.”

Pokkén Tournament DX on Nintendo Switch vastly expanded the game’s audience, with the Switch redux shipping 1.16 million copies alone by 2018. And Pokkén Tournament continued to draw roaring crowds at the 2022 World Championship, with each spectacular battles and $20,000 in prize money on the line. It’s a bittersweet moment for Hoshino – this will be the last year that Pokkén features in the event.

“My wish had come true.”

“I was really touched to watch the battles yesterday.” Hoshino says, a sad smile on his face. “There was a lot of excitement going on and I enjoyed the opportunity to be able to take pictures of the players and all the staff that have supported the community — and supported Pokkén — until now.”

Hosihno’s Pikachu-filled dreams are far from over, thanks to the runaway success of his latest genre experiment – Pokémon Unite. Launching on both Switch and mobile last year, this fast-paced and approachable MOBA has been a breakout hit.

“I'm actually surprised that so many people are playing Pokémon Unite! I didn't expect it, but of course, I'm extremely happy about it. What I enjoy the most is that people who may not necessarily have been that familiar with Pokémon are enjoying ir through Pokémon Unite. Equally, there's a lot of people who I did not expect to play MOBAs — I hear a lot of kids play Unite with their parents.”

Given Hoshino’s fighting game roots, Pokkén’s origin is a fairly natural one. But The Pokémon Company enlisted some outside help for Unite, teaming up with Arena of Valour and Call Of Duty: Mobile developer TiMi Studios.

Hoshino says both sides have learned a lot from the ongoing collaboration.

“Pokémon always tries to expand the brand by going into new genres. Of course, there's challenges because there's cross-border collaborations, but I have been able to work in a very good environment where people respect each other. I am delighted to be able to contribute to the wide-ranging development of Pokémon.”

Does he have a favorite ‘mon to main in Unite? “Absol,” he replies, without missing a beat. “He’s really strong and but also a very tricky character to play. Plus he’s the only Pokémon who can actually defeat Mewtwo, so I’ve got a lot of love for it.”

“I'm actually surprised that so many people are playing Pokémon Unite!”

Though Pokkén and Unite belong to different genres, Hoshino says they have more in common than it might seem at first glance.

“Because of my fighting game background, I watch all the [Pokémon’s] movements very closely. In Unite, a lot of the moves] are actually inspired by Pokkén. I came up with most of the goal motions and supervised all of the battle animations. I try to bring as much of that over from the [mainline] video game as I can. The abilities, the move sets in Pokémon Unite will not be something that the [mainline] video games wouldn’t have – I want to bring the feel of Pokémon to Unite as much as possible.”

So where will he take Pokémon next? “I’m considering many things,” he teases. (He’s definitely not considering a third-person action game, given the amusing face he pulls at my suggestion.)

Whatever the future holds, for now Hoshino-san is simply thrilled to see Unite get a seat-filling reaction at this year’s Worlds.