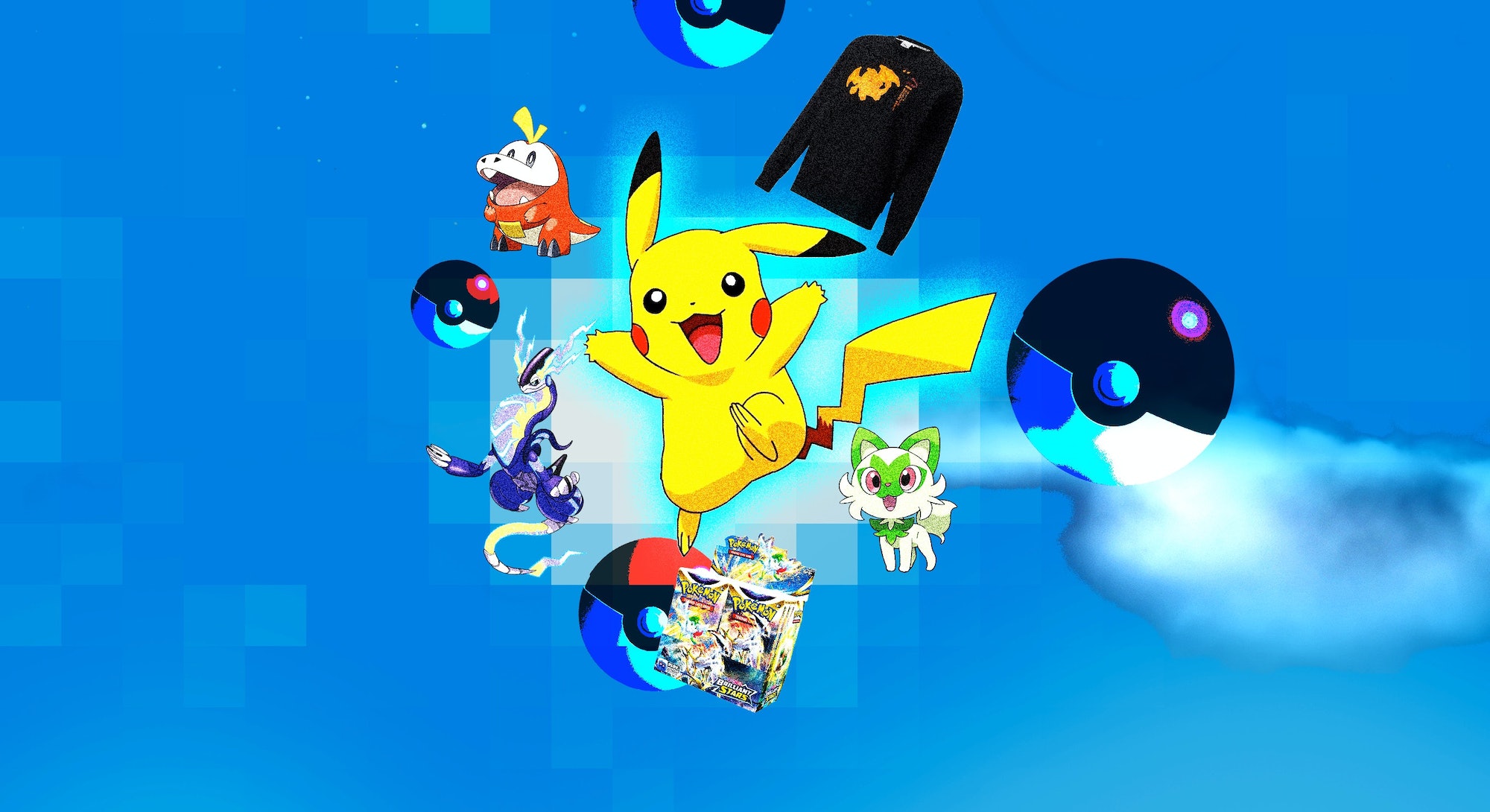 Pokémon is always evolving, but the beloved franchise’s next evolution is even more impressive than Charmeleon’s transformation into Charizard. (Well… almost.) Pokémon Scarlet and Violet — which kick off the ninth generation of Pokémon games, out today for the Nintendo Switch — mark some of the biggest changes to the format in 26 years.

Building off the “Wild Areas” of 2019’s Sword and Shield and the sprawling action-adventure of January’s Pokémon Legends: Arceus spinoff, Scarlet and Violet embrace open-world gameplay like never before with three storylines fans can tackle in any order. Other new features like terastallization — which lets Pokémon change their type mid-battle — add new layers of strategy to the classic turn-based battling system.

But what comes next? How much can Pokémon reinvent and reimagine its properties — the video games, but also its TV series, movies, merch, and trading card game — to surprise and delight fans who grew up with Ash and Pikachu?

To find out, Inverse spoke with five people whose lives and careers are deeply intertwined with the Pokémon community to discover, in their own words, what they want to see going forward. Whether they’re a streamer, a competitive battler, or even the longtime voice of Ash Ketchum, they’re all unique experts who want to see the franchise become the very best — like no one ever was.

Joe Merrick, webmaster of Serebii.net, which since its founding in 1999 has become one of the most acclaimed Pokémon fan sites and databases.

I want the future to surprise me. Some of the best times with Pokémon are when they deviate from what is expected of them by the fan base. All the time people try to cite established patterns, basically calling it a continual cycle of “new game, remake, new game, remake.” But [Pokémon developer] Game Freak has been shaking this up the last few years by bringing a lot of new things, as we saw with Pokémon Legends: Arceus and, to an extent, Pokémon Scarlet and Violet, where we have finally gone for an open world.

“Pokémon's fan base is always growing.”

I've always personally been hesitant about it, but the way they're going about it is interesting. I do wonder if — and in some ways I hope — they will go even further from this in the future. Will they make it completely open, where not only can you follow different paths at will, but you can do them in any order you want, such as doing gyms in any order and having it be truly level-scaling?

Pokémon's fan base is always growing. More and more, we have not only children playing Pokémon games, but also people who played when they were younger and are still playing. This is something I see in Serebii's demographics. Before it was predominantly 13- to 24-year-olds who used the site, but now it's bigger, with a big spread across the 24-39 group, too. I am certain this is something happening franchise-wide and not just related to my own experiences. I do feel we're going to see them catering to more of the older audience, especially with such quality adult-focused merchandise that has been hitting the Pokémon Center [stores] of late.

Daniel Dockery, author of the book Monster Kids: How Pokémon Taught a Generation to Catch Them All, which tells the history of how Pokémon — and later Digimon, Cardcaptors, and Yu-Gi-Oh! — became so popular and influential.

Pokémon is a game series built around discovery. It is so inherent in its concept that it renders even 26-year-old games fascinating, because of all the ways that it leads you to investigate yourself.

I don’t necessarily need a bigger or more complicated open world, but I want a world that lends itself to a very personally satisfying sense of discovery. I don’t care about having a Red Dead Redemption 2 or Skyrim-sized Pokémon world, I just want one that, as a player, is fun to explore and leaves me with an accomplished sense of growth as I do it. That’s one thing that Pokémon, at its best, has always been really good at.

With Scarlet and Violet, they’re building up this multiplayer aspect where you and a couple of friends can run around this world, and I think that’s really neat. I am a very old Pokémon fan, so that will take some getting used to. But as long as they keep finding new ways to explore the worlds they create — even if I’m not necessarily all that into doing multiplayer stuff — I’d like to see that.

“I don’t care about having a Red Dead Redemption 2 or Skyrim-sized Pokémon world.”

I don’t need any more Pokémon remakes for the games. I’m pretty good on that, though I wouldn't mind if they made the old game more widely available to play. But I’d like to see more of the extremely lavish pieces of animated web series that are so approachable and yet so distinct in their layers of references — they almost feel like a gift to longtime Pokémon fans.

The Pokémon Origins series that they did a few years back, for instance, basically re-told the Red/Blue/Green [video games] plot with some details from X and Y, which had just come out. In the early days of Pokémon, you had to imagine in your head what the Pokémon world really looked like. It’s not necessarily making me feel like a kid again, but they do awaken this weird part of my brain that’s like, “Oh, I would have imagined it being like that.”

Pokémon is so nostalgia-focused, so I love anything that imbues the world with this sense of life or the game detail exploded out in the greatest fashion.

Dani Sanchez, aka SuperDuperDani, YouTube streamer with more than 150,000 subscribers who focuses on Pokémon video games and trading cards.

Pokémon’s been able to integrate its products into so many different mediums: anime, video games, manga, the trading card game (TCG). People already know what Pokémon is, so they can take it in whatever direction they want.

I know a lot of the TCG stuff will end up being influenced by the games. The next trading card era is going to be Scarlet and Violet [themed]. But I would love to see the games integrate the cards — even if it was a gimmick, like the trainer can collect Pokémon cards or trade cards with other opponents.

Pokémon games have such a good formula with their original RPG. They have the regular video games on consoles, they have the AR games like Pokémon Go. I would love to see them expand into virtual reality and make an actual Pokémon world in VR. Can you imagine playing Pokémon in a Pokémon world? Literally throwing Pokéballs and catching Pokémon in first-person? That would be insane! If we’re advancing the tech, that’s the one area that I think it would be absolutely crazy to dive into.

4. More stability for the games

Christopher Monsanto, aka Chaos, founder of Smogon.com, a resource for competitive Pokémon battling that allows fans to hone their skills and play against one another using highly balanced rules and online simulators.

As a community that builds different ways to play around the base game [e.g., only using unevolved Pokémon, or Red and Blue rules], it would be nice if each generation was more stable. Downloadable content (DLC) has been a persistent issue because it changes up the metagame so fast and so often. It introduces new Pokémon, and this has complex interactions with the Pokémon that already exist. Writing guides and producing formats takes time and is an iterative process. From our perspective, it’s best if the foundation stays stable.

We are better able to deal with DLC now that we have a generation of experience working with it, but the general mood among the Smogon staff who write these guides to hearing that Generation IX is another DLC generation was “Not this again…” I’m hesitant to say no to more Pokémon — changes are great because they prevent play from getting stale. I would just like a way for it to be a little easier to manage.

“I’m hesitant to say no to more Pokémon.”

I don’t know about any specific mechanics I'd like to see for the future. We work with whatever they give us — the constraints breed creativity. I don't necessarily want Mega Evolutions to come back, but they were more fun to play with in our formats. Dynamax ended up getting banned from our formats, which was the first time we've ever banned a generation-defining mechanic — which I was not happy about — but the community seems adamant that the mechanic wasn't appropriate for competitive 6v6 singles. I hope that, for this next generation, we keep its unique mechanics.

I don’t have as much interest in anime/manga or the in-game experience as I do in playing the game competitively. But I hope that these supplemental properties will be interesting enough to keep the interest in Pokémon high — the more activity we have around the franchise, the better.

Sarah Natochenny, who has voiced Ash Ketchum in the Pokémon anime since 2006.

I want Pokémon to be relevant over many centuries. I see no end to a franchise that is consistently creating new worlds and new characters for Ash and trainers in the games to interact with. Ash has to exist so that the next generation can grow up with the same protagonist we grew up with. I personally believe that’s why he doesn’t age — he’s there for all of us, as a grounding, familiar figure. I feel the same way about Ash’s Pikachu. For my own sake, I hope I’m right! I want an infinite Pokémon universe, and I want Ash to be there for every child looking for a tenacious, loving role model.

The video games will probably be the most interesting evolution, considering all the emerging technology. We all saw Pokémon at the forefront of augmented reality when they partnered with Niantic to create Pokémon Go. Beyond that, the Pokémon World Championships makes stars out of devoted gamers every year, and streaming video games have never been more popular.

I want the world of Pokémon to be evermore collaborative and cutting-edge. I want to see 90-year-olds playing the Pokémon trading card game professionally in my lifetime, too. Can you imagine how many expansions they’d have to master? How that knowledge will affect strategy and gameplay? A thing of beauty.

Pokémon Scarlet and Violet is available now for Nintendo Switch.