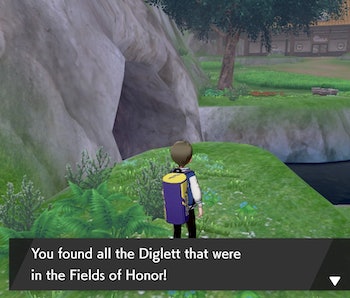 Shortly after starting Isle of Armor — the first major DLC for Pokémon Sword and Shield — you'll encounter a trainer from Alola standing right in front of the dojo with a pagoda roof. The trainer will ask you to assist him in finding his 150 lost Diglett, buried throughout locations in Isle of Armor. Don't worry about finding them on your lonesome! We've cataloged every Diglett and their location for your convenience. This list includes all 19 discoverable Digletts available in the first Isle of Armor location, the Fields of Honor. All you need to do is look out for the buried Digletts while exploring or simply use this list. We'll make sure you're oriented by using landmarks by the Digletts.

Since the trainer hails from Alola, their Digletts are Alolan as well. To spot an Alolan Diglett hidden underground, look for their three iconic blonde strands of hair. Despite their body being buried, the hair will always be present. Digletts are hidden in every Isle of Armor location, so it might take some time to find them all. If you can locate all of them, there's a very special reward in store for you.

What are the Pokémon: Isle of Armor Diglett rewards?

For every Diglett collecting milestone you hit, return to the trainer, and he'll reward you with a unique Pokémon from Alola that's otherwise impossible to find in Sword and Shield. There's also a chance to get an Alolaian starter like Rowlet, Litten, or Popplio. The one you get is determined by the starter you chose in Sword and Shield.

Now how do you find the 19 Diglett in the Field of Honor?

Where do you find all 19 Diglett in Isle of Armor's Field of Honor?

Diglett near the Diglett trainer

19. Directly next to the Diglett trainer who asked you to do this.

18. From the Diglett Trainer, move closer to the coast.

17. Go a bit more east to find one behind this rock, overlooking the beach.

16. Go to the beach spot seen from the previous Diglett.

15. Head west of the Diglett trainer, right by the grassy area.

14. Head further west to the cliff right by the cave.

Diglett near the Dojo

13. After crossing the bridge by the dojo, head east towards the water. It will be next to red flowers.

12. From the previous Diglett, head towards the sea to find one on a cliff.

11. Behind a rock directly ahead of the dojo

10. Right outside the sprouting berry patch by the dojo.

9. Inside the vacant berry patch next to the dojo.

8. On the edge of the dojo area, overlooking the ocean. The Diglett should be next to a tree.

7. Directly ahead of the dojo.

6. On the edge of the dojo's landmass, overlooking the Soother Wetlands entrance.

5. Across the dojo, by the entrance to the Soothing Wetlands.

Diglett near the train station

4. Behind a few boxes next to the station

3 & 2. There are two trees next to the boxes, each with a Diglett behind them.

1. Further down the shore, there's a red flower patch with a Diglett at the center.

You're all done with the Fields of Honor! Return to the Diglett trainer to reap your rewards (or at least some of them).

Pokémon: Isle of Armor is now available for Nintendo Switch.

This article was originally published on June 18, 2020