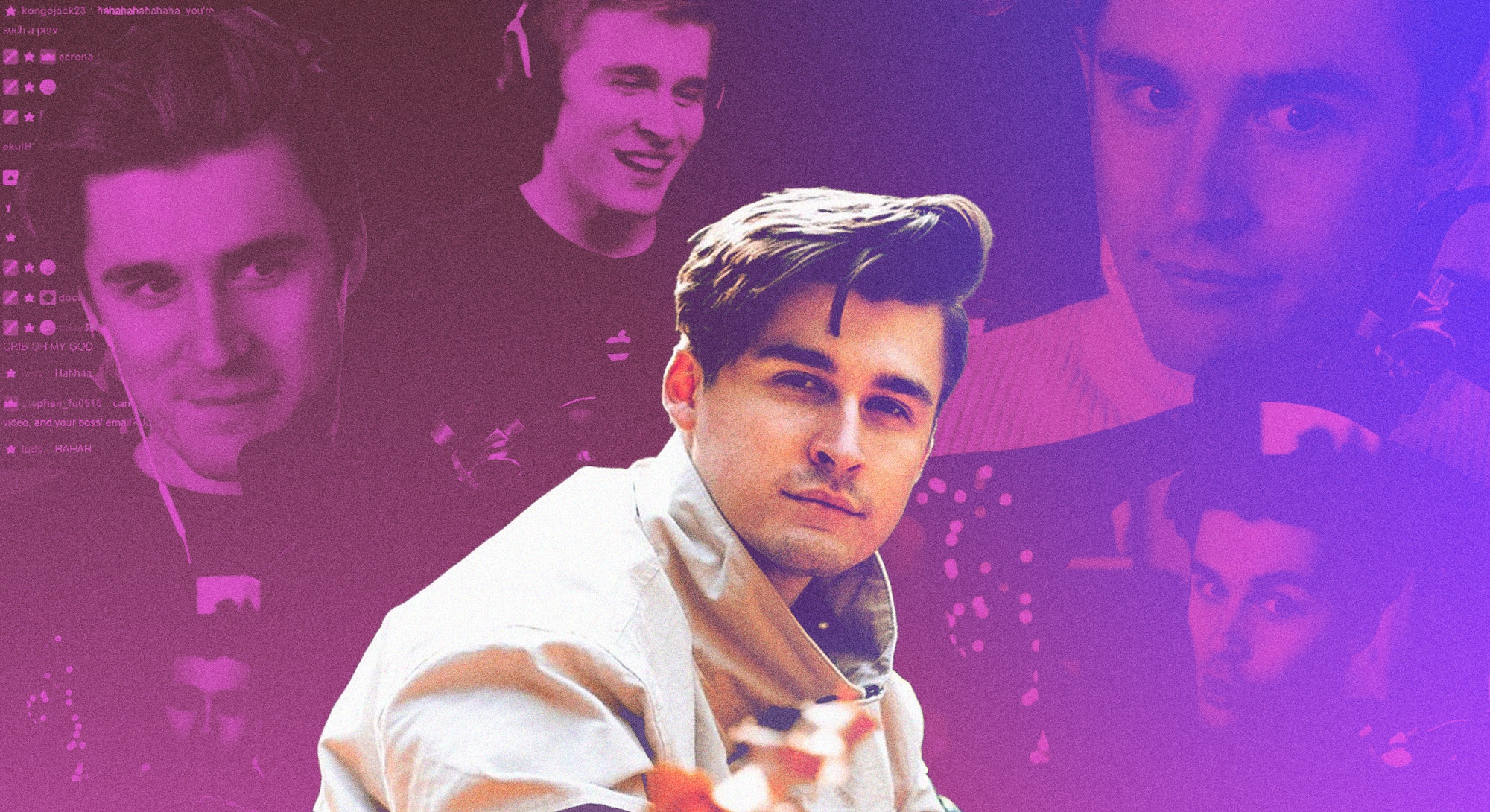 The most popular streamers tend to be either interesting personalities or exceptionally skilled at games.

Ludwig Ahgren has managed to have it both ways.

“You can't just be really good. You have to be godlike,” he tells Inverse.

The 27-year-old from Hollis, New Hampshire, is a self-described “little dumbass,” chock-full of charisma and formidable skills. But his Tiger Beat good looks belie a snarky wit and vulnerable sincerity. On stream, Ahgren has discussed his father passing away from complications resulting from alcoholism when he was 10, performing stand-up comedy in college, and how he struggled to keep a job after he moved to Los Angeles. He says it’s not enough to just be good at games — you have to be yourself.

“You have to be the best,” Ahgren says, “or you have to be the first person who is good, but you cannot just be good. If you just stream and you’re skilled, you'll get a certain audience. But you won't get the lion's share, or anywhere close to it. So, you need to be a 10. You need to be better than a 10, destroying everybody, if you have zero interest in trying to work on the personality side of streaming.”

Since 2018, Ahgren’s become the most subscribed Twitch streamer (with 283,066 subscribers) and hosted his own series of game shows called Mogul Money, all while streaming upwards of eight hours a day. In March and April 2021, he streamed uninterrupted for an entire month, even while sleeping in a red race car as thousands of viewers watched.

Earlier this year, he moved to YouTube, where he now has 3.3 million subscribers. His videos range from playing games like Fall Guys, Mario Kart, and Elden Ring to reacting to viral content and collaborating with Mr. Beast for big-money stunts.

“The streaming world is moving on a similar curve to where the gaming space is going — it’s getting more accessible,” Ahgren told Inverse.

Streaming has evolved from the stereotypical “nerd in the basement playing games with too much free time” into a $2.1 billion industry. Ahgren says streaming’s expansion beyond games has allowed content creators to reach a more diverse audience with a broader set of interests.

“You cannot just be good.”

It’s a lot like the way live-service games such as League of Legends, Fortnite, and Roblox have evolved past the confines of their pixelated realms to become part of the real-world zeitgeist. Thanks to an occasionally nefarious free-to-play model, these games wormed their way into the hearts and homes of millions worldwide. The model has seeped into streaming, too. While many viewers watch for free, superfans pay a monthly subscription fee for access to exclusive emotes and events. Others support their favorite streamers by buying their branded merch, like hoodies or coffee.

The Amazon-owned platform gives all Prime subscribers a free Twitch subscription each month, then urges them to keep their “subscription streak” with a paid contribution via notifications and updates. These Prime subscriptions are great for streamers since it subsidizes their income, but Ahgren is unsure how Twitch will “keep them around forever.”

“Twitch does a really good job at trying to get the people in the freemium model to spend as much as they can, even if it is free, and trying to convince people that a sub's worthwhile and add value to it,” Ahgren says.

In the early 2010’s, Twitch outright forbade non-gaming content on the platform. But in the summer of 2016, the mobile phenomenon Pokémon Go outdoors prompted the platform to create a new IRL section — and abandon the gaming requirement. In 2018, IRL became Just Chatting, allowing streamers to converse directly with their audiences. That same year, game sales hit $43 billion, propelled in part by Fortnite fever and streaming personalities like Tyler “Ninja” Blevins breaking into the mainstream.

As streamers soared to new heights, Ahgren says the most successful of the bunch never lost sight of what their most devoted fans wanted to see — a familiar face and a friend.

“If you come back from college classes, high school, work, whatever it is, and you just get to watch the dumbass on screen, that feels pretty good,” Ahgren says. “And it's like a consistent guy who is always going for laughs — rather than more of the stress that life always tends to offer.”

Twitch viewership exploded to 4.4 million concurrent users in April 2020 due to so many people being stuck inside. Ahgren made the most of the boom, thanks to his sharp eye for trends and potential collaborators, eventually displacing Blevins as the most subscribed streamer by mid-2021. By transforming his stream into a community — hosting real-life events and creating loads of inside jokes and memes — he’s been able to build a stable business with 14 employees.

“The streaming world is moving on a similar curve to where the gaming space is going.”

“I put everything that I make back into the business, and then I draw a salary,” Ahgren says. “Of course, there are times where I'll spend a stupid amount of money on personal things. But it always originally goes into the business. So, we have a safety net I feel pretty good about.”

Still, Ahgren acknowledges there’s a darker side to this freemium approach to games and streaming. Diablo Immortal, released in June 2022 for mobile and PC, has been widely criticized for incentivizing players to spend as much money as possible — sometimes upwards of tens of thousands of dollars — in order to get the most powerful loot and gear. Though spending is technically optional, progression is bottlenecked in a way that makes dropping cash feel more necessary than in other titles.

“Honestly, the biggest change I want to see in video games is the end of stuff like Diablo Immortal,” he says. “Freemium games that are predatory to people’s wallets and abuse [high-spending] whales will eventually break the camel’s back. In the future, I think there'll be more restrictions on what you can and can't do as a game creator. Unless people get mad about something, then the line of what’s acceptable will keep pushing forward.”

Perhaps the most extreme examples are the gambling streams that have exploded in popularity on the platform over the last couple of years. Streamers gamble using cryptocurrency on offshore websites, which can easily be circumvented by U.S. residents using a VPN. Some people are making eyewatering sums of money by promoting these sites, and slot streams are consistently among the most viewed content on the platform. Stake.com, among the largest of these offshore gambling websites, allegedly paid streamer Adin Ross $900,000 per week in crypto to play its digital slots on his stream.

“The biggest change I want to see in video games is the end of stuff like Diablo Immortal.”

Video game companies and streamers consistently innovate and push boundaries to expand their audiences. At the same time, Diablo Immortal and Twitch gambling are sterling examples of how regulation has failed to keep pace.

“The fact that you are able to market [crypto gambling] by just going onto a live streaming platform, where the streamers are playing and winning hundreds of thousands of dollars, and just have that be your ad is crazy,” Ahgren says. “If you reach a certain threshold of wealth, it just seems unnecessary to go that much higher for something that is not very ethical or moral.”

Inverse Luminaries profiles the most innovative and exciting people in and around the games industry for their insights on the future of the medium.