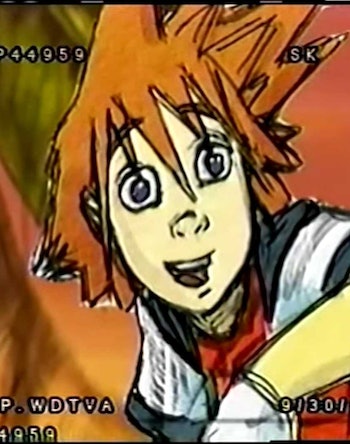 On a dull January day, Seth Kearsley was T-boned while driving his 1973 Datsun 240z, fracturing most of his ribs, hips, and pelvis.

The director of Eight Crazy Nights, The Looney Tunes Show, and Trollstopia was pulling out of the parking lot of a recording studio when a brush with death changed his outlook on life. He didn’t want to have any regrets.

He says the accident prompted him to drop a Holy Grail of lost media onto YouTube: the unaired Kingdom Hearts pilot animatic created in 2003.

“Will I get in trouble for it? I don’t know,” Kearsley tells Inverse. “After my accident, I’m more than a little out of fucks to give. This was something I wanted to share with the fans so much it hurt.”

Not so Simple and Clean

A lot of doors opened for Kearsley after he directed Adam Sandler’s 2002 Hanukkah hit Eight Crazy Nights. After sharing his love for anime in Hollywood meetings, his agent connected him with Disney for a television pilot based on 2002’s Mickey-meets-Final-Fantasy crossover, Kingdom Hearts. He immediately played the game with his nieces and nephews and fell in love.

“I was really impressed with the game. It had a story I wish we could do in American animation,” Kearsley said in an October 5 YouTube video.

Kingdom Hearts was a much simpler series back in 2003 — only the first title of what would become a 13-game, decade-spanning collaboration between Disney and Square Enix. Sora, who wields a giant key, travels alongside Donald and Goofy to various worlds inspired by Disney animated classics to find their friends Riku and Kairi.

There weren’t multiple timelines, dozens of hours of confusing story, and 13 versions of the villain Xehanort to contend with yet.

“This was something I wanted to share with the fans so much it hurt.”

Kearsley says hated the original pilot script, which he described in the YouTube video as “an episode of Aladdin co-starring the Kingdom Hearts characters.” After some back and forth, he was given the chance to rewrite it. From February to September 2003, he helped develop the script, storyboards, and eventually the animatic revealed this week. He drew much of the art himself.

“The whole thing was a favorite memory,” Kearsley tells Inverse. “I was convinced that not only that it would go, that it would crush. Instead, I was crushed when it didn’t go. Kingdom Hearts was the summer romance that disappeared with fall.”

The 11-minute pilot condenses much of the game’s complex story into a wordy exposition. Starting out in Sora’s home of Destiny Island, he joins Donald and Goofy in Agrabah to get the genie’s lamp. There, he comes across Riku, who has been tricked into retrieving the lamp for the nefarious Maleficent.

“There was the added difficulty of getting executives to understand what the show is about,” Kearsley says. “Hence the over-explanation of things.”

But the full pilot was never produced and Disney shelved the series was shelved, leaving it lost to time. Well, almost.

That changed in 2013, when Kearsley posted the storyboard to Deviantart. Fans were ecstatic to learn about the pilot’s existence, with YouTube video essays keeping interest alive. But it was still very niche within the fandom, with only a handful of diehard keyblade wielders even aware of its existence.

“I posted them figuring a few people would see them,” Kearsley says. “I didn’t know the KH community was even a thing, much less as rabid for content as they are.”

The pilot, released on October 11, immediately spread across social media. The YouTube video has amassed nearly 200,000 views in under 24 hours. The animatics are rough and reuse numerous in-game assets, but there’s no denying this pilot's charm and potential.

“The fan response has overwhelmingly been super positive,” Kearsley says. “It’s an affirmation 20 years in the making.”

“Kingdom Hearts was the summer romance that disappeared with fall.”

The next major entry in the video game series, Kingdom Hearts 4, still doesn’t have a release date, so it’s unclear when Disney’s favorite warriors will get new content. Baack in May 2022, rumors claimed that another Kingdom Hearts series is in the works at Disney +, but nothing has been confirmed.

This isn’t the first “lost” movie or TV show to have resurfaced online years later. Never-released Nickelodeon pilots, Jackass specials, and scrapped video games have all been unearthed in the past few years. In June 2022, an episode of Sesame Street starring the Wicked Witch of the West from The Wizard of Oz, which was deemed too scary for children in 1976, was randomly dumped on YouTube.