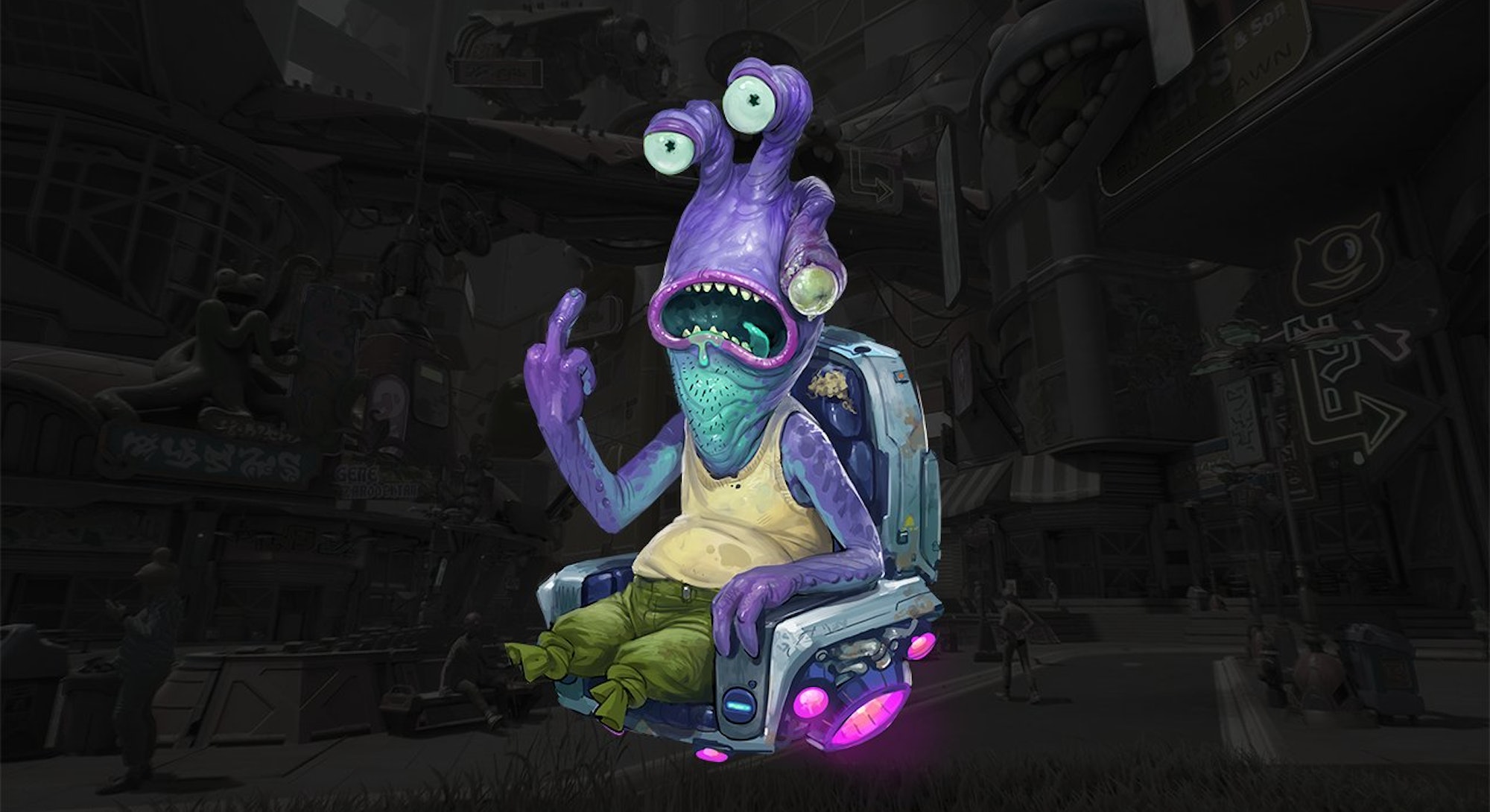 Early in High on Life, you are confronted by an NPC that will surely become one of the most annoying video game characters of all time.

He is loud, he is openly hostile, and he speaks with a tone that makes the sound of cutlery against ceramic resemble the voice of an angel. It is very obvious that the game — which has yet to tutorialize combat at this point, but has given you a gun — wants your FPS muscle memory to kick in, prompting you to hammer the right trigger.

There’s just one problem: This alien, this relentlessly infuriating little brat, tells you he’s a kid (He certainly doesn’t sound like a kid, but that’s what he says). He dares you to shoot him, but the game blocks you from doing so — your talking gun even berates you for the fact the idea crossed your mind. But if you try again, and again, it gives in. “There goes our E for Everybody rating,” it says.

This is according to the developers watching me play, as apparently I’m just the second person at Gamescom who doesn’t shoot the self-proclaimed kid. (You later find out he is actually 30 years old.) Most people pull the trigger at the first opportunity, whereas others meet his mother around the corner, get her permission — or more accurately, hear her insistence — to go back, and kill him on their second visit. It never crossed my mind to do any of these things, but it seems like the majority of players tried to shoot the alien purely because they felt certain they would be prevented from doing so. They were not.

In isolation, this scene probably seems gratuitous, if not downright distasteful, although it’s a good insight into how High on Life functions better as a gestalt than a collection of individual parts. The impression that stuck with me after my 30-minute demo of the game, which is still with me now, is that High on Life — a game I previously had no excitement for — works because it is audacious, ambitious, and always surprising. It is not just Rick and Morty toilet humor with talking guns, which is something I can say with authority because I would detest that. It is a game that is often genuinely funny — it helps that it’s also a robust and tactile shooter.

The basic premise of High on Life is that Earth has been invaded by an alien cartel who are selling humans as drugs. You play as a bounty hunter with access to Gatlians, which are sort of anthropomorphized talking weapons. These include the gloop gun mentioned above, and Knifey, who people will likely recognize from the abundance of clips on social media that highlight his obsession with stabbing things.

Had I been exposed to these clips on their own, I wouldn’t have found them tolerable, let alone funny. But just like its Opening Night Live trailer didn’t do it justice, High on Life will always come across as oppressively cringey unless you’re actively playing it. Three of the devs tell me that most of the people who have played so far have went through similar motions: They weren’t excited for the game, became even less enthused about it after watching the ONL trailer, and then somehow completely U-turned once they spent some quality time with it. (I can corroborate this, given that a common sentiment among many people I spoke to was, “I thought I’d hate it — now I can’t wait for it.” I feel the same.)

For example, the aforementioned Knifey does rely on cringe humor at times. Expletives and instances of “Stab stab stab!” are mixed in various permutations that ultimately amount to the same sort of edgy gags aimed at edgier teenagers.

A boss fight from High on Life, which debuted during Gamescom 2022.

But there’s also a point where Knifey gets annoyed at you for neglecting him, before imploring you to ditch your gun and go for an “Any% Knifey-only run.” I genuinely laughed here. Not the kind of slight exhalation of excess air through your nostrils, but a full, hearty belly-laugh. This happened multiple times during my 30-minute demo, which means I can confidently say that High on Life worked for and earned more laughs out of me in half an hour than lots of other games have done across their entire runtime.

In general, High on Life excels when its humor hinges on the fact it knows it’s a video game. A random NPC can be seen fishing in the slums. When you ask him if he’s caught any fish, he says no — there aren’t any fish in the lake. It’s too toxic. Why is he fishing then? Because he’s waiting to work up the courage to drown himself. It is absurd, but it succeeds in poking fun at how most NPC plants of this nature are.

Meanwhile, a bunch of weak, early-game enemies will threaten you, calling themselves “the strongest enemies in the game.” As you easily make your way through wave after wave, however, they’ll realize that they’re actually just tutorial fodder, and exclaim as much before scattering all over the place like Halo grunts. It’s neither a case of trying too hard to break the fourth wall nor being too delicate with its treatment of it — it just smashes it to smithereens with a bazooka in the opening act and unapologetically has fun with it from there on out. And it works.

Combat is also surprisingly refined. High on Life is a smooth FPS that uses its fluidity to help you quickly intuit fluency. It’s also an impressive exercise in freneticism, combining high-octane shootouts with rapid, omnidirectional traversal to create a game where every encounter oscillates between tightness and turbulence. That’s not to mention its weapons all have their own unique secondary mechanics, allowing them to double up as traversal gadgets or puzzle tools. On top of facilitating intricate level design, this also makes combat even more varied — for example, Knifey can be used as a grappling hook for aerial maneuvers, while the gloop gun can use his Glob Shot to propel enemies into the air, from where they can be juggled with his primary fire.

All of this comes full circle in boss fights, where arenas are hand-crafted to make use of various abilities. The one I got to play through involved taking down 9-Torg — one of many clones of Torg, all of whom are now competing with one another for turf (it’s a whole thing). From deflecting bullets to grappling around the perimeter of the stage, to dodging radial laser beams and using the Glob Shot to interrupt powerful wind-ups, the boss fight was, dare I say… fun. I am generally of the opinion that the word “fun” is mostly useless because it is often imprecise and usually improperly used — but it’s the most accurate term here.

The profanity and silliness of High on Life will be a bit too much for some, particularly those who choose not to engage with it outside of trailers or clips on social media — but both of those perspectives completely belie how clever the game is in other ways. It’s not derivative of other shooters, nor is it anything like what most people will expect it to be. And that’s kind of the point.

High on Life is a relentlessly talkative, oppressively bright, and forcibly frenetic shooter — except all of those usually negative adverbs are flipped on their heads to somehow, bizarrely, work together here. This is a game I thought I’d dislike, and yet now I can’t wait to play more. It’s a game that looks like many other games, and yet somehow succeeds in doing its own thing. And it’s a game that many people will scoff at because of its associations and implications — and yet, it won’t care, because it is confident itself and justifiably so. I, for one, am excited for an Any% Knifey-only run.