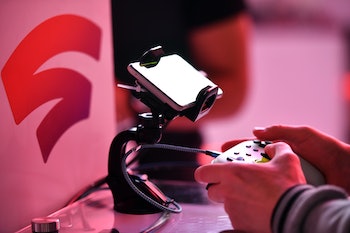 Is Google Stadia a dud? While the cloud-based video game platform had a lot of potential when it launched 14 months ago, it never caught on. And Google announced this week that it is shutting down its Stadia Games & Entertainment studio, which will drastically scale back the once ambitious plans to become the "Netflix-for-games." While the question still technically remains open, Google's decision has suggested the answer is yes, Stadia is a dud.

Google's clumsy foray into gaming suggested downsizing measures would be in the offing, but this latest news does all but prove true what some may consider an old chestnut about video games:

Big tech has no idea what gamers want.

Over the past decade, the four largest Big Tech companies (Google, Amazon, Facebook, Apple) each made their own push into video games. Despite lofty ambitions and millions of dollars spent, none have managed to make a dent in the industry, let alone replicate the success of Microsoft's Xbox.

With development on Google Stadia scaled back, what is the future of Big Tech in the video game industry? To find this out, you have to look at the ups and downs of each company's foray into video games.

Google was at the forefront of this trend, promising a prominent cloud-based video games platform that would be the future of gaming. While Google spoke boldly, it failed to deliver on many of those promises.

The cloud-based technology behind Stadia was unmatched, but pretty much everything else the company promised failed to materialize — especially when it came to offering compelling exclusives. When push came to shove, Google bailed on Stadia rather than trying to make good on its initial pitch.

"Given our focus on building on the proven technology of Stadia as well as deepening our business partnerships, we’ve decided that we will not be investing further in bringing exclusive content from our internal development team SG&E, beyond any near-term planned games," Stadia boss Phil Harrison said in a February 1 blog post.

Harrison says Google will "continue to invest in Stadia and its underlying platform to provide the best cloud gaming experience for our partners," but this move leaves 150 people without a job (Google is letting them reapply elsewhere in the company) and Stadia without a stable first-party studio to make games for it. Any incentive to use Stadia is pretty much gone.

Developers don't seem to be happy about their experiences at Google either. "Google was a terrible place to make games," an anonymous source told Kotaku. "Imagine Amazon, but under-resourced.”

That brings us to the next Big Tech company that's sinking in gaming: Amazon. While Amazon Game Studios has been focused on making PC and console games for over half a decade, it has yet to find any success. Crucible flopped and shut down just a couple of months after launch, and several other projects have reportedly been canceled internally.

Now, Amazon Games Studios must look to its cloud-based service Amazon Luna and the MMO New World in hopes of future success. Amazon threw hundreds of millions of dollars at gaming, but the project suffers from mismanagement and a focus on trying to produce the biggest games on a proprietary engine according to Bloomberg.

Amazon wants to get big in games without putting in enough legwork, which puts the company in an intriguing position. It must choose whether to overhaul management, double down on Amazon Luna, and keep trying to make new games — or just pull the plug and walk away.

Considering the company's many obstacles, it's not looking good.

For Apple and Facebook, the strategy is to invest money in games, but let the service grow organically. It's a nice idea, but unfortunately, that just doesn't work in the video game industry. "Serious" gamers don't take it, well, seriously, and casual gamers don't even know it exists.

The last game I played on Google Stadia was Scott Pilgrim vs. The World: The Game - Complete Edition, a 2020 remaster of a digital-only game infamous for being difficult to buy online. It's a perfect metaphor for why gamers don't trust Big Tech: Few will pay full price for a game on a service that might disappear soon.

While Google claimed Stadia wouldn't go the way of Google+ — and it still technically hasn't — it's clear Stadia doesn't have the pull to become the fourth major platform alongside PlayStation, Xbox, and Nintendo. Surveying the competition, none of the other big "four" in tech have a serious shot at joining a "big four" in gaming either.

Big Tech just doesn't seem to know how to stake its claim in video games. These companies willing to throw money at it, but as Google admits in its blog post, "creating best-in-class games from the ground up takes many years and significant investment, and the cost is going up exponentially."

The lack of immediate success is offputting for companies that want their services and games to be Call of Duty-level hits right out of the gate. The success of Microsoft, a technology company that introduced the Xbox console in November 2001, shows slow and steady still may be the best path forward.

While "big tech doesn't know what gamers want" isn't exactly an old chestnut just yet, it's become the only logical explanation for the repeated, failed efforts by major technology companies to make a video game or platform that moves people.

More like this
Gear
Dec. 2, 2022
I wore three sleep trackers for two weeks and this is what I learned
By Ian Carlos Campbell
Gear
November 29, 2022
Why Spotify Wrapped should be all year round
By Ian Carlos Campbell
Gear
November 29, 2022
Sony’s new wearable makes your metaverse avatar more lifelike
By Jackson Chen
Related Tags
Share: