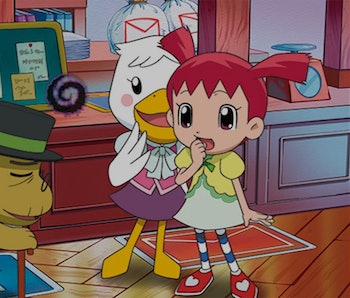 As your Animal Crossing: New Horizons adventure continues, your escape from the real world could be greatly enhanced by cosplaying your favorite anime characters. Attires from Jojo’s Bizarre Adventure always feel like they’re redefining chic. Meanwhile, Naruto and Dragon Ball Z characters have a classical sense of cool to their looks.

Don’t you want your clothing to be timelessly cool? If you do, check out 18 costume QR codes featuring stylish looks from Naruto, Jojo, and Dragon Ball Z.

How do I obtain an anime costume in Animal Crossing: New Horizons?

If you want to obtain a costume listed here, all you need is a cell phone with the Nintendo Switch Online app. There’s a bit of a special setup process involved. Still, thankfully, we have a guide focused on using QR codes in New Horizons using the somewhat complicated NookLink QR code scanner that converts the designs and places them into your game.

Once you have all of that good to go, use one or all of the following QR codes to obtain your own anime attire.

While you can’t possibly hope to replicate the innate swagger of the Jojo cast, you can certainly try. Jojo features a superbly masculine, yet effeminate cast, each with an array of poses, personality quirks, and distinct looks. We’ve rounded up six objectively perfect costumes from Jojo’s Bizarre Adventure. Wear them to finally have some clothing worth your Giorno’s theme town tune.

What are the Naruto QR code costumes for Animal Crossing: New Horizons?

If you want to call yourself a ninja while replacing all the stealth with flashy outfits and flashier techniques, you should certainly look at this wondrous attire from Naruto. You can replicate the looks of all your favorite Konoha-based Ninja like Naruto, Sakura, Sasuke, and Kakashi. You can even look like the star-studded fan-favorite criminals from the Akatsuki. All you need to do is scroll down to find the QR code that’s right for you. We’ve got six to choose from.

There’s a fair chance that you got into anime during the ‘90s via an anime-themed block called Toonami. If that’s the case, take up more space in your heart than the trials and tribulations of Goku, Vegeta, and the other Z Warriors on Dragon Ball Z. Who wouldn’t want to fly through the sky, firing energy beams every which way? If that sounds like you, you can pretend to achieve such things with six Dragon Ball Z-themed costumes based on your favorite characters.

This article was originally published on April 30, 2020