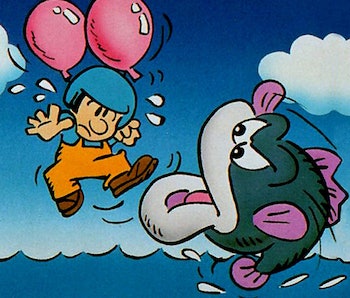 Being a 1995 baby meant I spawned during the meteoric rise of 3D gaming. Sony released the first PlayStation months before I was born, and the Nintendo 64 arrived only two years later. Although I grew up during a new dawn for consoles, one of my earliest and fondest gaming memories involved the 1984 8-bit platformer Balloon Fight.

The Nintendo Entertainment System title is barebones, like most titles at the time. However, its dedication to co-op gameplay is the perfect historical example of why simple games that are rooted in having fun with friends, like the recent indie sensation Among Us, will always have a place in gamers' hearts.

My parents were skeptical about buying me a console, worried that I'd be glued to the TV all day. Instead, they opted for handheld alternatives, like the Game Boy Color. Without a console to call my own, I spent countless hours in the early 2000s on the floor of my childhood friend's room, where we took turns clearing levels on Super Mario 64. My video game experience was fundamentally changed when my bud's dad dusted off his NES and slotted in his Balloon Fight cartridge.

Until then, my friend and I had only been passing an N64 controller back and forth. Grabbing the NES's rectangular controller was my first introduction to the world of co-op games. I was hypnotized by Balloon Fight's pixelated art, and its oscillating theme song filled my friend's room as we became the red and blue Balloon Fighters. But we quickly realized this wasn't going to be our average gaming session.

The game's main objective is to float above its enemies — Balloon Birds — and pop their balloons before they pop yours. This is made much harder in Balloon Fight's two-player mode because teammates can pop each others' balloons or knock them into danger. Needless to say, our first few rounds were utter chaos.

We knocked each other into Balloon Birds and were gobbled up by the giant fish that lurks at the bottom of Balloon Fight's stages. But all of those failures made us realize communication is key, so we began coordinating our strategies for each level by shouting out which enemy we were going for or what side of the stage each of us would clear. It got to a point when my friend and I were choosing to play the 8-bit title over newer releases at the time, like Super Smash Bros. Melee.

Balloon Fight changed my childhood gaming sessions from quietly watching someone else play after I died in Super Mario 64 to hours-long grinds filled with laughs and screams. It also changed many of Nintendo's future titles, including the 1985 release of Super Mario Bros.

Mario creator Shigeru Miyamoto revealed the water level in Super Mario Bros. used the same floating mechanics used in Balloon Fight a year earlier. The retro title would also go on to inspire another teenage obsession of mine, Balloon Duel on NewGrounds, which improved everything about Balloon Fight.

This Adobe Flash game was uploaded to the animation-sharing site by user Mousekliks back in 2004 but I caught on to it in 2008. It let players customize their Balloon Fighter, added unique weapons you could equipped to suit your play style, and they added a local Versus mode that turned the co-op madness of Balloon Fight into hysterical trash talking sprees.

Much like the 8--bit title, the objective of Balloon Duel was to pop opponents' balloons by stepping on them to have them fall to their doom. There was a single player mode but it was most fun when you played with two or three friends huddled around the same computer, which became an almost daily routine for my friends and I at my school's library.

Sadly, all popular internet browsers like Google Chrome and Mozilla FireFox will no longer be using the Flash plugin after December 2020, which means Balloon Duel will soon be unable to run on most browsers and become just a fond memory for former NewGrounds users. But the legacy of Balloon Fight is far from dead.

A port of the game is available for $7.99 on the Nintendo Switch, which has let me relive my most cherished gaming moments. Balloon Duel is a testament that simple concepts that are executed well and bring people together can be just as engrossing as playing games with 4K graphic and planet-scale open worlds. That has become acutely evident over the end of 2020.

The meteoric rise of Among Us seems counteriuitave months before the PlayStation 5 and Xbox Series X seems are set to usher in a new era of console gaming. But the party game's success can be chalked up to the same allure that drew me into Balloon Fight a decade after its release.

It's undeniable that lifelike graphics and massive virtual worlds are the future, but the 8-bit legacy of creating straightforward games that are elevated by playing with friends and stranger will float on forever.

8-Bit Week is an Inverse celebration of the classic — and forgotten — games that pushed the boundaries of interactive entertainment in the 1980s and beyond.

More like this
Gaming
6.28.2022 3:00 PM
How Ace Attorney spawned one of the most enduring character ships ever
By Hayes Madsen
Gaming
7 minutes ago
Everything you need to know about the hyped Metroid Prime remaster
By Joseph Yaden
Gaming
5 hours ago
Fire Emblem devs reveal the surprisingly honest reason they made Three Hopes
By Hayes Madsen
Related Tags
Share: