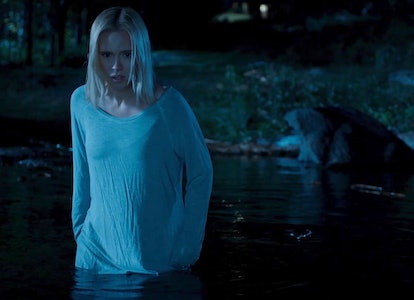 Paranoia is a strong motivator.

Watching characters convince themselves something is wrong only for nobody to believe them is a timeless plot device going back centuries. Whether it’s comedic like The Truman Show or terrifying like Get Out, watching one person in a tireless fight to confirm their suspicions is always entertaining and nerve-wracking.

But what happens when you do something new with this old genre? This 2020 film recaptures the magic of the paranoid thriller and adds a dose of intense sci-fi. Written and directed by Braden R. Duemmler, this sci-fi thriller breathes new life into a classic story and takes you on an unforgettable journey. If you’re seeking a movie that blends horror and sci-fi well, look no further than Netflix for What Lies Below.

What Lies Below begins where many coming-of-age movies end — the last day of camp. Teenager Libby, short for Liberty, (Ema Horvath) is picked up by her mom, Michelle (Mena Suvari), who tells her all about her new boyfriend John. Libby’s skeptical, especially when her mom tells her John thinks she’s 35, not 42.

John is the picture of the ideal man: He’s fit, generous, and loves his job as an aquatic geneticist. In a touching moment, he explains his work studying how animals adapt to saltwater to Libby. She softens for a moment but still doesn’t trust him.

As the film goes on, John tries, again and again, to get on Libby’s good side, and Libby only gets more and more suspicious of his intentions. A normal man wouldn’t be out at night swimming only to appear bone dry seconds later. A normal man wouldn’t give his girlfriend’s teenaged daughter a bracelet covered in fertility symbols.

Libby’s suspicions prove to be on the right track, but John’s reasons for barging in on her life are more insidious than just scamming her mother or trying to become a trophy husband. His true agenda is not to conquer Michelle but to conquer the world.

What Lies Below received mediocre reviews as a horror film. But at its core, it’s not a horror story; it’s a psychological thriller. The film doesn’t center its tension on an outside threat to Libby. Rather, the suspense grows as Libby struggles to get anyone to believe her about John’s true identity. Then, she discovers she wasn’t even scratching the surface of his weirdness. He’s not only harboring an evil scheme, he’s not even human. At least, not completely.

Many beats of What Lies Below feel lifted whole-cloth from other stories, but that’s an asset, not a liability. In the world of sci-fi thrillers, tropes like these are like musical notes, endlessly rearranged to craft new narratives. If it’s trope-y, it’s only because it’s paying homage to the films that came before it, not for lack of innovation.

If you’re looking for a way to ring in the spooky season while still getting a hint of science fiction (or simply want to watch a nail-biting paranoid thriller), look no further than What Lies Below.

What Lies Below is now streaming on Netflix.