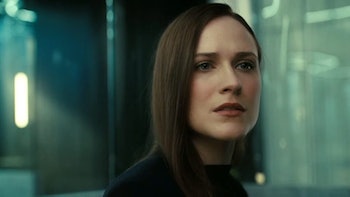 Did Dolores take the blue pill? After seemingly getting erased out of existence in the Westworld Season 3 finale, Evan Rachel Wood returns in Westworld Season 4, but not as Dolores. Instead, she’s “Christina,” a woman writing stories on-demand for an enigmatic company called Olympiad.

In the finale of Westworld Season 3, Dolores technically gave her life to save all of humanity — even though she’d initially been interested in destroying everyone. Speaking to Deadline, showrunner Lisa Joy said Dolores is still “absolutely dead” in Season 4. Not only that but the new character, Christina, is not supposed to be read as a version of Dolores at all.

Ahead of the launch of Westworld Season 4, Evan Rachel Wood doubled down on this, telling Inverse: “Playing [Christina] required a much more human approach this season. I feel like I wasn’t playing a Host this season. I was very much a player in the game,” and made it clear that this is supposed to be “a completely new character.”

Presuming that Joy and Wood are telling the truth — and the link between Christina and Dolores is only superficial — is there still an in-universe explanation? If Dolores was originally molded on a human (likely?) then it stands to reason that person could have flesh-and-blood decedents (or ancestors) in the real world. This explanation is probably the cleanest and would make Wood’s appearance similar to Brent Spiner, Isa Briones, and Orla Brady all playing multiple characters in different timelines on Star Trek: Picard.

In fact, Picard might be a good model here, simply because, in Season 2 of that show, the human character of Kore Soong (Briones) looked exactly like the android character Soji, but the explicit link was never actually spelled out. The audience just kind of had to connect the dots on their own. So, is Westworld pulling a Star Trek: Picard? Do we just accept that Christina is a new character, tangentially connected to Dolores, maybe through some time-jump shenanigans?

Maybe not. While it’s tempting to compare Westworld to other robot narratives like Battlestar Galactica, Blade Runner, or Star Trek, the show has slowly been moving towards something more complex. Or perhaps, the right word is integrated. Season 3 was largely about humans, and how a massive AI called Rehoboam was essentially manipulating everyone. In an Asimov-esque twist, Westworld Season 3 asserted that the Hosts and the humans were all stuck on pre-determined loops by cruel programming. So in terms of which characters have free will and which don’t, Westworld has already made it clear that Hosts and humans are pretty much equal.

So where does that leave Christina? In the Westworld Season 4 premiere, she seems haunted. And any reasonable person would conclude that means she’s haunted by memories of previous doings in Westworld. If Christina is merely a distant human relative to Dolores, why have establishing shots in which she’s asleep in her bed and she looks just like Dolores did in Westworld Season 1?

One answer is, of course, that Christina actually is Dolores, but in a different form. The twist here, maybe, could be that the consciousness of Dolores exists in some kind of new Westworld version of the Matrix. And, like Trinity in Matrix: Resurrections, this Dolores has taken the blue pill, or been forced into some version of it. This is also a little like Neo in The Matrix 4 insofar as Dolores is designing narratives and games for mass consumption in this reality, echoing Neo’s game-designer facade in Resurrections.

Westworld has put its robotic hosts into virtual worlds before. The Valley Beyond (also known as “The Sublime”) is a virtual robot heaven within the Westworld universe. Also, Maeve was trapped in a World War II faux-Westworld in Season 3, which was later revealed to be entirely virtual. In these situations, when physical AIs are transported into a virtual AI environment, we’ve got kind of a reverse-Tron situation, which, if you squint, would make Maeve a bit like Tron himself. (She does, after all, fight for the humans now!)

If Christina’s world turns out to be a virtual one, or if Christina does contain a repressed version of Dolores in her mind, Westworld will have a lot of explaining to do. As usual.