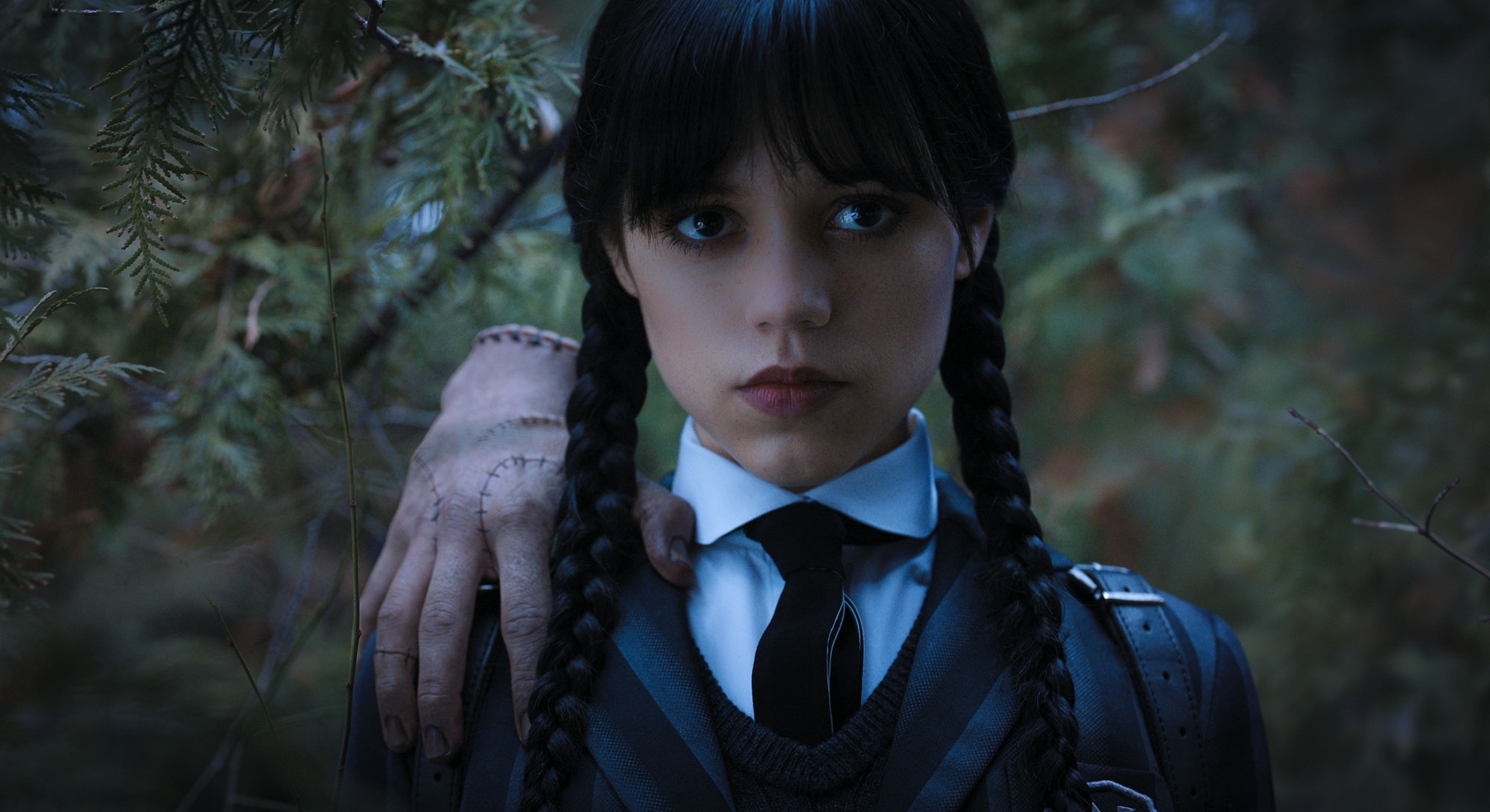 In retrospect, it’s wild that Tim Burton hasn’t made an Addams family adaptation before Netflix’s Wednesday.

The gothic icon, best known for movies like Beetlejuice and Edward Scissorhands, is listed as an executive producer and directs the first four episodes, but the series was created by Alfred Gough and Miles Millar, best known for creating Smallville.

It’s their influence that courses throughout Wednesday. Thanks to Burton’s direction (and Danny Elfman’s score) the style is pure Addams, but the substance brings to mind a classic CW teen drama, complete with a murder mystery and romantic subplot. Surprisingly, the marriage works eerily well.

Wednesday follows the eponymous goth girl icon (Jenna Ortega) as she’s ousted from her public school and sent to her parents’ alma mater of Nevermore Academy. There she’s surrounded by fellow misfits, including sirens, werewolves, and vampires. But even in a school filled with “outcasts” (and yes, they do use that term), Wednesday stands alone. She’s given a pitch-black version of the uniform and sent to court-ordered therapy in the local town of Jericho.

Jericho is full of “normies” (again, the term they actually use), including her therapist, Dr. Valerie Kinbott (Riki Lindhome), Sheriff Donovan Galpin (Jamie McShane), and his teenage barista son Tyler (Hunter Doohan). When the latest in a string of bodies is found in the woods, a mystery unfolds involving a strange monster, student societies, and centuries-old grudges, all with Wednesday at the center. There’s even a psychic element, with Wednesday getting random visions of the past.

After the first episode, it may be tempting to dismiss the entire series. Wednesday is purposefully unlikeable — that’s the entire Addams Family gimmick — and could also be described with that much-debated term “Mary Sue.” Wednesday’s a writer, a cello prodigy, speaks several languages, and becomes an intrepid girl detective. She’s great at everything and has no apparent flaws.

It takes a couple of episodes, but those flaws do show themselves. At Nevermore, the talented Wednesday is in the shadow of her seemingly perfect mother, Morticia (Catherine Zeta-Jones). The guest appearances of Morticia and Gomez (Luis Guzman) are the highlight of the show, and even factor into the Nevermore murder mystery. Their past, and the past of Principal Larissa Weems (Gwendoline Christie), provide a key clue for Wednesday’s case.

There are other guest stars too, but they’re very hit-and-miss. Christina Ricci builds on her past as Wednesday by playing the first “normie” teacher at Thornhill, and it’s hard not to smile when she relates to Wednesday as an outcast among outcasts. Fred Armisen as Uncle Fester is less charming, acting with all the nuance of his Saturday Night Live character, Regine.

In the series’ latter half, the gothic comedy tone takes a backseat and the mystery finally comes into focus. As Wednesday interferes with the Sheriff’s investigation, goes on expeditions with her friends, and solves puzzles, the existing property that comes to mind isn’t The Addams Family, but Nancy Drew.

No, seriously. She’s a teenage girl who balances a weird proficiency at solving crime with everyday girl things like school dances and boys. Granted, Nancy never makes a murder board on a corkboard in her dorm room, but it’s still a natural parallel. Once you stop viewing the series through the Tim Burton lens and instead see it as a teen mystery drama with a goth streak, it all makes sense.

Wednesday is a lot like a teenager: It’s trying very hard to pursue an image, has a bit of an identity crisis, but ultimately lives with the fact that it’s not as edgy as it first appears. It’s a relatable journey and delightful to watch all the way through.