“I can't remember anything without you.” 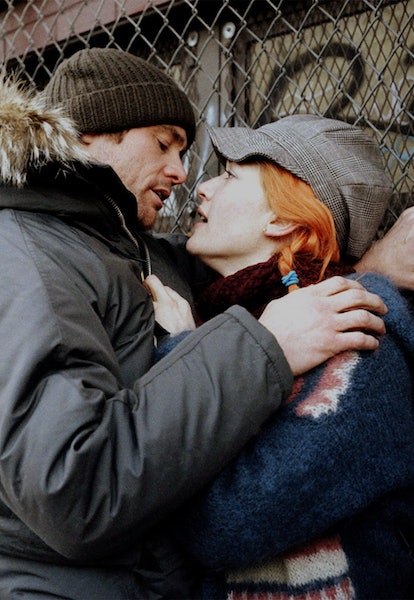 If you've ever read unmade screenplays or watched early student films, one plot device is used over and over again: someone wakes up in the morning and has a fuzzy memory of what is going on. Sometimes the script starts with an alarm clock. Sometimes with the sun coming up. Sometimes this script becomes 2009's The Hangover. But, with Eternal Sunshine of the Spotless Mind, the idea of memory erasure wasn't just a plot device; memories as a metaphysical setting was the plot.

As the story of WandaVision rushes to its inevitable conclusion, it's time to remember how much this Marvel series owes to what is arguably Jim Carrey and Kate Winslet's best movie. The greatest soft science fiction movie of the 21st Century made speculative tales about memory not only accessible but heartfelt. And in almost every way, this movie has never been topped.

Mild spoilers ahead for WandaVision and Eternal Sunshine of the Spotless Mind.

Comparing WandaVision to Eternal Sunshine of the Spotless Mind would likely make Charlie Kaufman either super annoyed or endlessly amused.

If you only look at his fictional writing, Kaufman's actual pop culture tastes are nearly inscrutable. In Adaptation, he shows both disdain for conventional narratives in which people overcome their problems, but it's also a celebration of stock movie plots, too. Nicolas Cage, playing a faux-version of Kaufman in Adaptation, says that he won't do a screenplay where he has to end up "cramming in sex or car chases or guns," and then, at the end of the movie, that's exactly what happens. In Kaufman's 2020 novel, Antkind, an unreliable narrator either hates Wes Anderson or loves Wes Anderson.

The point is, saying that WandaVision is anything like Eternal Sunshine could be considered indie movie sacrilege, depending on who you talk to. As someone who was dubiously inspired to take writing seriously thanks to Adaptation, I admit I might have to hand in my 2002 twee hipster card for saying what I'm about to say. Here it is.

WandaVision wouldn't be possible without Eternal Sunshine of the Spotless Mind, and that's a good thing.

WandaVision and the art of forgetting

For better, and sometimes, for worse, WandaVision relies on the central notion that the audience is willing to wait around not to find out what happens next, but to learn what has already happened.

From Memento to the works of Philip K. Dick, various science fiction stories rely on this convention, sometimes to create paradoxical "stakes." For example, making temporal locations intentionally blurry and vague was the only way that Westworld's first two seasons could have actually worked. The twists and revelations are actually just moments of delayed exposition, which is exactly what WandaVision did in Episode 8, with the somewhat on-the-nose title, "Previously On."

Because WandaVision concerns memory repression, erased memory, and just plain-old brainwashing, it easily could be compared to a ton of other science fiction plots that employ any or all of those tropes. I mean, if you squint, Wanda's control over the minds of the population of Westview is like a suburban version of the Borg from Star Trek.

But that comparison doesn't really do much to get at the heart of why WandaVision connects with audiences. If Wanda's ability to remake the world was just about controlling people with a spooky Stephen King-vibe, the show would be very different. Instead, the real stakes aren't so much about memory, but the pain of forgetting.

If you've somehow never seen Eternal Sunshine of the Spotless Mind, it's about time you do. The movie is streaming on Peacock for free and remains one of the greatest, saddest love stories ever told. It's also probably the deftest use of fictional technology in a movie, ever. We're never told how the memory-erasing tech really "works" and the film is utterly unburned by any unwieldy technobabble. And yet, this memory-erasing tech exists, it's just that it doesn't exactly work correctly.

Like Philip K. Dick's "We Can Remember It For You Wholesale," — the short story that inspired Total Recall — Eternal Sunshine of the Spotless Mind meditates not on the implication of memory erasures working, but more brilliantly, of half-assed memory erasures they don't actual erase. Though we don't know it at the beginning of the movie, Joel (Jim Carrey) has had his memories of his girlfriend Clementine (Kate Winslet) intentionally erased. The clues are there though — pages ripped out of a diary, a vague sense from both characters that they have met before.

In WandaVision, all of these same themes are there, just less subtle, and with witchcraft and super-complicated Marvel backstory thrown into the mix. But, in the end, the message of both stories is the same: Is remembering the pain of lost love worth it? And, if some science fiction trick could change your perception of your own memories, what would that do to your life? What about the lives of the people around you?

In the Marvel Cinematic Universe, we tend to believe that some kind of objective reality does exist. But maybe that's not true. When one of your characters has a reality-altering thing called "the Mind Stone" in his head, you could argue that it's tough to really trust what we're seeing.

Just like Clementine and Joel almost telepathically decide to meet in Montauk, Vision told Wanda to meet him in Westview. What happens next is probably all in her mind, and on some level, that's all that counts. Some might argue we only got one episode of Wanda going into her memories, but if you view the show through an Eternal Sunshine lens, maybe the entire series never needed to happen in a physical place.

If Eternal Sunshine proved anything, it's this: Stories can take place almost entirely in the minds of characters, and still break our hearts.