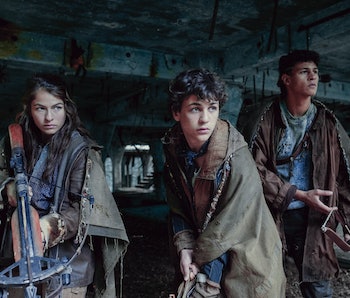 Tribes of Europa is, unsurprisingly, a hit. The Netflix original German sci-fi series is an amalgam of everything Netflix has mastered in its near-decade producing original content — science fiction world-building, teen drama, gory violence, and multi-lingual storytelling.

It's remained in Netflix's top ten for nearly a week, which has fans wondering just what is next for what's left of the Origne tribe in an ever-changing world. Here's what we know about Season 2.

Has Tribes of Europa been renewed for Season 2?

As Tribes of Europa only recently hit screens, the Season 2 confirmation may be a fair bit away. However, the strong showing so far makes it comparable to its spiritual predecessor, Dark. Dark, just like Tribes of Europa, was a German sci-fi series involving a post-apocalyptic world. If the reception of these shows is just as similar as the content, a Season 2, and possibly even 3, announcement is soon to arrive.

Another Netflix international dystopian drama, Alice in Borderland, was renewed for Season 2 a mere 2 weeks after the release of its first season. Seeing as the success of Alice in Borderland and Tribes of Europa is also comparable, the renewal could come in a matter of days.

When is the Tribes of Europa Season 2 release date?

If Tribes of Europa gets its much-needed second season, fans may have a while to wait. Due to the massive scale of the production and the exotic locations (the post-apocalyptic Europe shown is mostly real-life Croatia) there will probably be about a year's wait for a second season, and with delays happening left and right due to the ongoing pandemic, there's no telling what will happen with the show's timeline.

Dark had about an 18 month gap between its first two seasons, and then a year's gap between its second and third. If the two shows continue to show similar life cycles, we should see a second season between Spring and Fall 2022.

Is there a trailer for Tribes of Europa Season 2?

There's no trailer just yet, but even when it arrives, it won't reveal as much as the Season 1 trailer did. Now that the show has established itself as a twisty-turny epic drama full of betrayals, we may be in for an extremely vague publicity cycle for an inevitable Season 2. Luckily, much like Dark, what little visual information we get from the trailers can be picked apart for clues.

A trailer will be still a while off, even if the series is renewed relatively soon. But perhaps a renewal announcement video will still contain some much needed clues about what will happen to the three protagonists we followed throughout Season 1.

What Happened in Tribes of Europa Season 1?

Tribes of Europa starts as a story of three siblings defending their home from invaders. They fail, and what follows are three equally thrilling and equally backstabby storylines as each sibling continues on their own quest to regain some sense of a normal life, and possibly reunite.

Eldest sibling Kiano is captured by the villainous and uber-goth Crows. Over the season, he rats out internal corruption, is almost strung up and hanged by "The Wire," and ultimately becomes a sex slave and personal servant for the fierce Lord Varvana. There, he realizes he doesn't want to rebel against the Crows, he wants to become one of them. After a heartbreaking battle to the death with his own father, he is officially initiated into the Crows and given a new name, Tarok.

Liv, the crossbow-toting middle child, finds herself within the multi-cultural Crimson Republic, but she only has one agenda: finding her family within the Crow headquarters. After manipulating her way through the Republic's military, she finds herself bonding with their Crow prisoner, hoping she will guide her to her family. Unfortunately, the plan goes awry and she finds herself adopted by the mysterious Femen tribe, the one tribe not depicted in the rest of the season.

Youngest boy Elja holds the item everyone seems to want: an Atlantean cube. With the help of eccentric merchant Moses (and the cube's ability to transform into a laser gun), he finds himself along the path to a strange landscape, where he uses the cube to open up a portal. But a portal to what?

What's the plot of Tribes of Europa Season 2?

While the cliffhangers from Season 1 may make for a frustrating viewing experience now, they also make it possible to speculate about what a hopeful Season 2 has in store. We've seen each sibling make contact with a new tribe, so the next Season will hopefully show Kiano as he makes moves as a newly inducted Crow, Liv exploring just what makes the strange Femen tribe different from the others, and Elja enter this portal to (hopefully) communicate with the Atlanteans.

If we do get to see Atlanteans in Season 2, all the questions from Season 1 — what truly caused the Black December, what the cube truly does, and why it was sent over the Origines in the first place — could finally be answered. Even if we have to wait for up to two years for those answers, it will be well worth it.

Tribes of Europa Season 1 is now streaming on Netflix.

More like this
Entertainment
7.27.2022 4:15 PM
Everything we know about Rick and Morty Season 6
By Corey Plante
Entertainment
8 hours ago
Has your favorite HBO Max show been canceled? The fate of 9 sci-fi series revealed
By Robin Bea
Culture
8.2.2022 9:00 AM
7 incredible sci-fi shows and movies coming to Netflix in August 2022
By Robin Bea
Related Tags
Share: