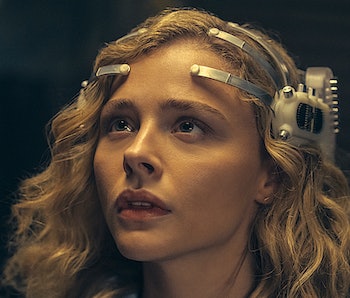 Spawned from the fertile imaginations of Westworld executive producers Jonathan Nolan and Lisa Joy and series creator Scott B. Smith (A Simple Plan, The Ruins), The Peripheral arrives this week with its cerebral style of science fiction adapted from cyberpunk guru William Gibson’s (Neuromancer, Burning Chrome) original 2014 novel of the same name.

Expect head-scratching twists and existential turns in Prime Video’s trippy tale of a mysterious VR headset that teleports an innocent small-town American woman into a grim dystopian future London and her uncanny connection to that alternate reality timeline.

Strap on your thinking cap, and let’s discover what the future holds for this ambitious new series!

When is The Peripheral’s release date?

The Peripheral will stream exclusively on Amazon starting Friday, October 21 2022.

What is The Peripheral’s release time?

How many episodes is The Peripheral?

The premiere season of The Peripheral is made up of eight episodes in total.

What is the plot of The Peripheral?

Based on William Gibson’s unsettling novel from 2014, The Peripheral centers around a talented young woman named Flynne Fisher who’s stuck in a tiny town in the Blue Ridge Mountains in the year 2032, where she scrapes by playing difficult levels of VR video games for the elite with her brother, Burton.

When she beta-tests a new cutting-edge game, it opens a portal to an alternate version of London 70 years in the future. Fisher is intrigued with this strange transported reality and becomes addicted to returning inside its mysteries to figure out exactly who created the trans-dimensional rift, the dangerous nature of her link to a girl called Aelita, and how it relates to Fisher’s own fate.

Who is in The Peripheral cast?

Is there a trailer for The Peripheral?

Will The Peripheral get a Season 2?

Yes, it is highly likely! Greg Plageman has replaced Scott B. Smith as showrunner for The Peripheral, and a second season is currently in active development. However, no official word from Amazon Studios has been announced yet ahead of the series debut.

More like this
Entertainment
Feb. 6, 2023
The Last of Us Episode 4 Delivers the One Thing Missing From the Show
By Alex Welch
Entertainment
Jan. 30, 2023
Doctor Who Could Become the New Marvel — But There's a Catch
By Ryan Britt
Culture
Feb. 2, 2023
Buck Rogers in the 25th Century’s Most Baffling Change Also Gave Us Its Best Character
By Ryan Britt
LEARN SOMETHING NEW EVERY DAY.
Related Tags
Share: