Not familiar with that IP

“What am I gonna do with a soul anyways?” 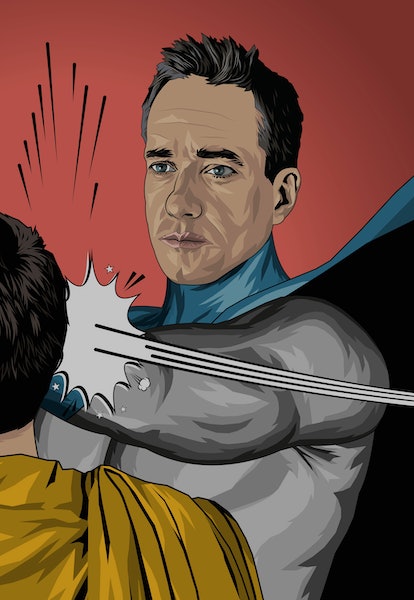 Succession has always been a story of heroes and villains.

Those labels may shift from episode to episode as Kendall tries something new to overthrow his dad or Logan tries to pull one over on Congress, but there’s always been someone to root for. In the Season 3 finale, “All the Bells Say,” this gets completely uprooted. Characters we usually look down on emerged as scrappy upstarts, leaving the characters who would otherwise be ignored to stage a surprise move the audience never expected. And it was all thanks to a diversion.

The Kendall of it All

The penultimate episode of Succession ended with a shocking cliffhanger that implied Kendall wasn’t just going through a hard time; he might even be dead. The first moments of the finale establish that he’s not (quick work from Comfrey meant he just had to spend the night in the hospital), but he still takes up a lot of his siblings’ attention.

They even stage a mini-intervention for him. That leads to Kendall breaking down on a dirt road after seeing waiters from his mom’s wedding, which remind him of the boy he left to drown after Shiv’s wedding back in the Season 1 finale.

Kendall had pivoted between hero and villain all season, going from conniving rebel to fragile birthday boy and back again. But here we see him not as a power player in the Waystar-Royco power struggle but as a man exhausted with trying to both manage his past and secure his future.

Kendall, the leader of the Roy siblings since the start, became nothing but another member of their coup as they attempt to stop the sale to GoJo. Oh, how the mighty have fallen — but this fall was nothing but a diversion.

A Deal with the Devil

While every Roy sibling has their moments of glory and shame, there’s one pair of Succession characters who always seem to be cooking up a scheme that fans can root for. Whether it’s making a Tomlette while breaking a few Greggs, or whipping water bottles out of “executive-level business,” their bromance seemed to be the emotional constant the show needed. While loyalties among the siblings varied, you could always count on Tom and Greg to bumble about.

But in the Season 3 finale, the team-up scheming was left for the usually individualist Roys, and Tom and Greg looked like they were going to just enjoy the wedding festivities without knowing anything was amiss. Until Tom propositions Greg to be his “attack dog.”

Tom calls Logan to warn him about his kids’ plans, allowing him to open the divorce settlement with Caroline and negotiate away the need for a supermajority in order to sell the company. After a season of being Waystar’s cruise scandal whipping boy, considering his federal prison options, and even being told by his own wife that she doesn’t love him, Tom makes a bold grasp for leadership.

Greg, fresh from climbing a rung of the dating ladder by courting a Contessa, decides to join Tom, echoing the parable Tom told earlier in the season. Like Nero, Tom throws his wife down the proverbial stairs and chooses to side with his favorite servant — Greg.

Where we Least Expected It

The world of Succession is full of betrayal, and so far every season finale has included one. In Season 1, a bear hug letter from Kendall fails when he has his bender-induced accident. Season 2 featured Kendall’s turn from Logan’s meek lapdog to rogue agent actively working against the family. But Season 3 had a betrayal completely outside the spotlight thanks to Tom.

It’s the kind of plot twist that’s straight out of a superhero movie — just when the villains think they’ve won, an underling turns good and betrays them. Or, alternatively, just when the heroes think they’re going to save the day, one of their own decides to serve their own interests. It’s a play used by all sorts of franchises, but it’s especially common in ones involving super teams like the Avengers or Eternals.

What does this mean for Season 4? Well, all the dynamics have shifted. Logan, instead of siding with his family to keep his family business intact, is trying to sell out and hand over the reins to a stranger. Tom, instead of being the company’s resident Wife Guy, is actively working against his spouse. And Greg, who’s usually just happy to be invited, is making quips and power moves with the best of them.

With Season 4, we may see Succession’s character dynamics completely reset.