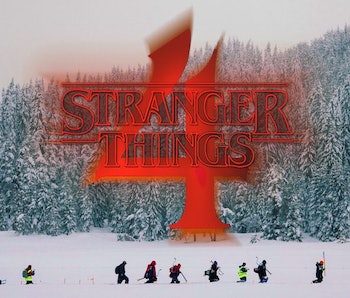 Break out the Eggo’s! It’s been almost three years since the climactic ending of Stranger Things Season 3, with the cast of teens and adults of Hawkins, Indiana being cast in a million different directions. Now, after a pandemic-delayed production, Season 4 of the hit Netflix series is on the horizon, albeit in a much colder climate.

Here’s everything we know so far about Stranger Things Season 4, from its release date to which cast members will return and how many more seasons are left of the show.

What is the Stranger Things Season 4 release date?

Netflix finally announced when Stranger Things Season 4 will premiere, but its release date is not quite what you expect. Unlike Seasons 1 through 3 which released all of their episodes at once, Season 4 will be released in two parts — or “volumes” as Netflix is calling them.

Coming out only a few weeks apart, each volume will contain a batch of episodes said to be longer than the ones from previous seasons. Netflix confirmed that as a whole Season 4 will be twice as long as Season 3. So, there is plenty to look forward to this summer.

When did Stranger Things Season 4 film?

In February 2020, the show posted a teaser trailer along with an announcement from series creators The Duffer Brothers that Stranger Things Season 4 was officially in production. Filming began in Lithuania before moving stateside. However, two weeks into shooting, production was shut down due to the coronavirus pandemic.

After six months in stasis, Stranger Things Season 4 continued production in September 2020 in Georgia. The show has continued to shoot there as of March 2021.

Is there a trailer for Stranger Things Season 4?

Yes! Netflix initially posted a teaser trailer in September 2019 when it announced the Season 4 renewal, hinting at going global with the phrase “We’re not in Hawkins anymore.” The show got an official trailer on Valentine’s Day 2021. Titled “From Russia with love...” it revealed the fate of Jim Hopper, who was thought to have died in the Season 3 finale.

Another trailer released on May 6, 2021. It flashed back to Eleven’s time in the Rainbow Room with the malevolent Dr. Brenner alongside other superpowered children.

Which cast members will return for Stranger Things Season 4?

It looks like all of the main cast from Season 3 of Stranger Things is set to make a return for Season 4. That includes:

Additionally, Season 4 will feature a host of brand-new characters. New series regulars include Jamie Campbell Bower (Sweeney Todd) as Peter Ballard, an orderly as a psychiatric hospital; Eduardo Franco (Booksmart) as Argyle, a stoner pizza boy and new friend of Jonathan; and Joseph Quinn (Catherine the Great) as Eddie Munson, a metalhead who runs the Hellfire Club.

The show will also feature recurring appearances from horror icon Robert EnglundVictor Creel, a man who is imprisoned in a psychiatric hospital for a gruesome murder in the 1950s. Other guest stars include Tom Wlaschiha as Dmitri, a Russian prison guard who befriends Hopper; Nikola Đuričko as Yuri, an unpredictable Russian smuggler; Joel Stoffer as Warden Hatch; Sherman Augutus as Lt. Colonel Sullivan, a military man who wants to end the evil in Hawkins; and Mason Dye as Jason Carver, seemingly the “perfect guy” at Hawkins High.

How many episodes will be in Stranger Things Season 4?

In June 2020, the Duffer Brothers confirmed that Stranger Things Season 4 would consist of nine episodes. And then in February 2021, Netflix confirmed that Season 4 will be split into two parts. We don’t know exactly how many episodes will be in each part as there are an odd number of episodes.

Here are the official titles for Season 4’s episodes:

What is the plot of Stranger Things Season 4?

Series creators Matt and Ross Duffer outlined the plot of Stranger Things Season 4 following the release of the trailer in February 2020:

We're excited to officially announce that production for Stranger Things 4 is now underway—and even more excited to announce the return of Hopper! Although it's not all good news for our 'American'; [Hopper] is imprisoned far from home in the snowy wasteland of Kamchatka, Russia, where he will face dangers both human… and other. Meanwhile, back in the States, a new horror is beginning to surface, something long buried, something that connects everything...

There is no confirmed plot for Season 4 beyond that. The Duffers told Entertainment Weekly that, as the trailer indicates, the series will move majorly outside of Hawkins for the first time, taking place at least partially in Russia. The fourth season will hope to answer the looming questions left at the end of Season 3, including both how Hopper wound up a Russian prisoner and what became of Joyce, Jonathan, Will, and Eleven as they left Hawkins.

Additionally, star Gaten Matarazzo has teased that Season 4 will be taking on a more “mature tone” than its predecessors. “I think they do that on purpose,” he told Entertainment Tonight, “because I think they want their show to mature with their kids. As we are growing older as people, we have to grow older as characters. They're confronted by this issue, but they embrace it, and they use it to their advantage.

Will Season 4 be the last season of Stranger Things?

In February 2022, Netflix announced that Season 4 will be Stranger Things’ penultimate season. That means Season 5 will be the final season of the hit series.

In the lead-up to Stranger Things Season 4, many expected it to be the show’s last. The Duffer Brothers had initially said they had built out a loose arc for four seasons, and the aging of its young stars was becoming the demogorgon in the room of the series.

However, the creators put that speculation to rest upon speaking with The Hollywood Reporter in August 2020. “Season four won't be the end,” said Ross Duffer. “We know what the end is, and we know when it is. [The pandemic] has given us time to look ahead, figure out what is best for the show. Starting to fill that out gave us a better idea of how long we need to tell that story.” So expect the adventures of the Hawkins crew to continue past Season 4!

So far, Stranger Things has been one to embrace its 1980s setting, with references from New Coke to Back to the Future. Here’s a quick rundown of our previous coverage on the movies and events that could play a role in Stranger Things Season 4:

How Can I Watch Stranger Things Season 4?

You’ll be able to watch Stranger Things Season 4 on Netflix, if and when Volumes 1 and 2 premiere on May 27 and July 1, respectively. For the time being, Seasons 1-3 are available to stream now.

Stranger Things Season 4 Vol. 1 will premiere May 27 on Netflix.