“I couldn’t, for the life of me, get my right eyebrow up!” 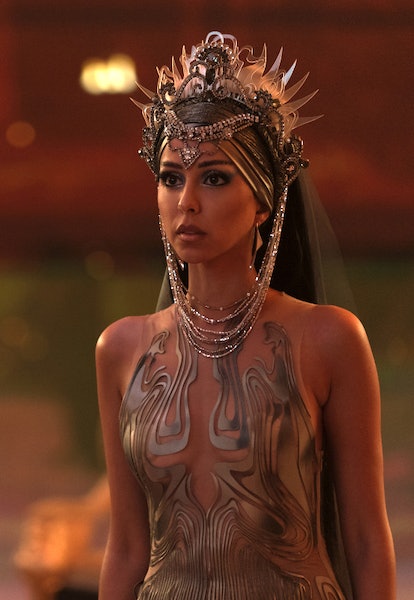 Which eyebrow does Spock lift? For Strange New Worlds actress Gia Sandhu, getting the eyebrow right was crucial — and difficult.

Fulfilling the promise of Strange New Worlds showrunner Henry Alonso Myers to “bring the funny to Star Trek,” Episode 5 finds Spock and his fiancée T’Pring accidentally switching bodies after an intimate Vulcan mind-meld. If you know your Trek, you’re aware that Spock's consciousness, or katra, has been put in someone else’s body before. In the 1968 episode “Return to Tomorrow,” Spock’s brain briefly inhabits Nurse Chapel’s body, while in Star Trek III: The Search for Spock, Spock’s katra is carried by Dr. McCoy. But in the time period of Strange New Worlds, none of that has happened yet.

“Now is the past,” Gia Sandhu says with a laugh, referencing Strange New Worlds’ status a a prequel, but also a show set in 2259. “Or, the future, depending on how you look at it.”

In the well-known Original Series episode “Amok Time,” T’Pring was presented as Spock’s estranged fiancée, desperate to get rid of her baggage. From the very first episode of Strange New Worlds, we see T’Pring in a new light. At this point in Trek’s unfolding story, Sandhu says, “they’re trying to make it work.” She points out that, speaking in Vulcan, Spock tells T’Pring he loves her.

“They're doing the ultimate version of long distance, living on different planets,” Sandhu says. “Which is the reason that they're sharing katras. They want to understand each other better. They want to be more sympathetic towards each other's experiences.”

For Sandhu, playing T’Pring in Strange New Worlds presents a unique challenge. It’s a character hardcore fans are familiar with, and yet she was only in that one 1967 episode, played by the late Arlene Martel. Sandhu says Martel’s performance had an impact on her.

“She's on on screen for a short period of time, but she's just such a wonderful presence. You can't help but be drawn to her. It was an interesting experience for me to develop who this person was, when they were younger. There was this beautiful outline that was available to me. I feel lucky that, you know the pressure was taken off a bit, because you know, she wasn’t extraordinarily established, like a lot of the other characters in canon who we're seeing younger versions of now. I really got to fill in the blanks for myself.”

Sandhu also says that Bernadette Croft’s costumes on Strange New Worlds contribute to her shaping of T’Pring, but the stunning dress worn by T’Pring in the dream sequence in “Spock Amok” came from fashion designer Iris van Herpen. “I don't know if I'll ever get to wear Iris van Herpen again, but boy did I delight in wearing it.”

“I had to do my face yoga to get that right.”

Although Sandhu was a fan of The Next Generation when she was younger, she did a deep dive into all things Star Trek to prepare for her role as T’Pring. Her research even extended to the other prequel series, Star Trek: Enterprise. “My mom’s partner Rick was very excited when I was cast,” she says. “And he said, ‘okay, now you have to watch T’Pol [played by Jolene Blalock], she was the female Vulcan we’ve seen the most of.’”

But in “Spock Amok,” Sandhu wasn’t only playing T’Pring. Because Spock inhabits T’Pring’s body for most of the episode, Sandhu had to figure out how to play Spock convincingly, even if he was moving with T’Pring’s body and speaking with T’Pring’s voice. This meant starting with “the source material” by watching lot of Leonard Nimoy. But Sandhu also says she and Peck collaborated.

“Ethan is a very generous actor and really opened up to me about his process and what he thinks about when he plays Spock... his body language is big. He stands very upright, you know, with his hands behind his back.”

As an experienced actress, the challenge of playing Spock was within Sandhu’s grasp, but doing the eyebrow was difficult. “I couldn't for the life of me get my right eyebrow up. And Ethan was like, ‘It's fine, I do them both.’ And I'm like, ‘No you don’t,’” she says. “I knew some fans out there would clock that, so I had to do my face yoga to get that right.”

After this funny and sweet episode, Sandhu can’t reveal if we’ll see more of T’Pring in Strange New Worlds. It certainly feels like this shouldn’t be her last appearance. In The Original Series we saw Spock and T’Pring at the end of their melodramatic journey, but here they’re just at the beginning.

“We find two young beings who love each other,” Sandhu says. “But they also have Nurse Chapel crushing on Spock! And that drives another little wedge in there. Let’s jus say, they have a lot of challenges.”