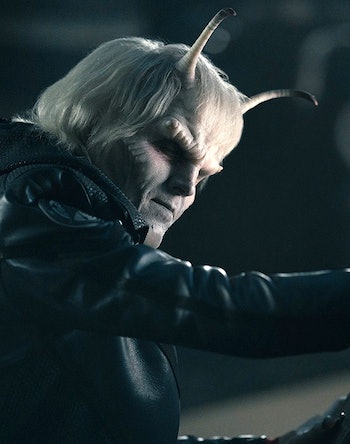 But in the final moments of Star Trek: Strange New Worlds Episode 9, “All Those Who Wander,” one member of the crew does seemingly depart forever. Here’s what actor Bruce Horak knew about Hemmer’s fate ahead of time, what could have happened off-screen, and why he’s just getting started in the Star Trek universe. Spoilers ahead.

After battling the Gorn on a crashed starship, the chief engineer of the USS Enterprise, Hemmer, steps off a cliff to prevent the Gorn babies inside him from bursting out and killing everyone. It’s the kind of twist sci-fi and horror fans are used to seeing: The hero knows they’re infected with something unstoppable, so they make the ultimate sacrifice. But for Horak, the knowledge of his eventual sacrifice was in his head from the very beginning.

“I knew right off the bat,” Horak tells Inverse. “[Showrunner] Henry Alonso Myers told me in the Zoom audition before I even had my [prothestic] head mold made. He told me that I was gonna go.”

Not all of Horak’s castmates were aware, including the actor behind Hemmer’s protégé, Uhura, Celia Rose Gooding. “Celia didn’t know until we actually read for episode 9,” he says. “I was pretty careful not to blow the secret.”

Hemmer has only been in a handful of episodes, but as Horak says, “I knew we were building him up as a fan favorite.” The writer of the episode, Davy Perez, admits to Inverse that he “agonized,” when it came time to actually write the big moment.

“Bruce Horak brought Hemmer to life with such warmth and brilliance, his chemistry with Celia as Uhura,” Perez says. “It was difficult to stay committed to that storyline.”

Horak points out that Hemmer is a kind of Obi-Wan Kenobi figure to Uhura, and that as sci-fi mentor deaths go, he was satisfied with how Hemmer went out. “It was all about that family bond, and him being a mentor. I was just like, ‘make it a cool death.’ Don't have just some cruddy red shirt death. But then I read it. And it’s so cool. You couldn’t ask for better, really.”

It’s the kind of moment fans will probably equate with Spock’s death in Star Trek II: The Wrath of Khan, which is poignant since this episode takes place two and a half decades before Spock’s sacrifice. Hemmer even flashes the famous Vulcan “Live long and prosper” salute before heading out into the cold.

“I can't wait to read the fan fiction novel where Hemmer survives.”

Perez says this parallel was intentional. “ I do like to think that the Spock of tomorrow is being informed by some of the lessons and experiences he's having in our show,” he says. “I think Hemmer’s death would be something that would flash across Spock’s mind in The Wrath of Khan; remembering how Hemmer put the lives of his crewmates before his own, but also, how Spock is affected by it in the aftermath. Who knows, maybe some of this experience mourning Hemmer is why Spock has the foresight to give Bones his Katra?”

Hemmer’s death reminds the Strange New Worlds audience that the stakes are high. Despite the fact that this is a prequel to The Original Series, not everyone is safe. But, also, like in The Wrath of Khan, there’s a glimmer of hope. After all, we didn’t actually see a body. Could Hemmer be back? And what about those Gorn eggs inside of him?

“I can't wait to read the fan fiction novel where Hemmer survives and the Gorn erupts out of him,” Horak says laughing. “And then, the child of Hemmer grows up, and he’s half-Gorn and half-Aenar with this internal conflict, and he joins Starfleet and like teams up with La’an’s kid. I can’t wait for that.”

Even if that never happens, Hemmer and Horak have already made their mark on the Final Frontier. Horak is the first legally blind actor to play a blind character on Star Trek, and while the story of Hemmer may be at an end, Horak teases that we haven’t seen the last of him. Many actors, from Jeffrey Combs to Kenneth Mitchell, have played numerous characters on Star Trek. Brent Spiner’s Data died back in 2002, but Spiner keeps returning to Picard as new characters.

“That’s the beauty of Star Trek,” Horak says. “There is that history where you can come back. And I can say this: The Star Trek career of Bruce Horak is not over. That much I can say. And it’s an absolute dream.”