“Beings may elect their leaders, but the Force has elected us.” 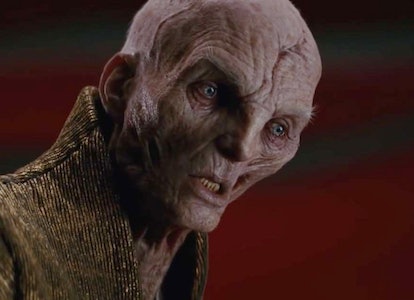 Though it's been years since we've seen his wrinkled, sunken in face grace movie screens, fans are still trying to figure out exactly where Snoke came from in the Star Wars universe. The Mandalorian Season 2 practically confirmed Snoke was a product of cloning, though where that genetic material originated is still a matter for debate. Baby Yoda? Moff Tarkin? The theories are endless.

But now, a wild new fan theory suggests Snoke is a combination of two great Sith Lords, the next in a long line of master and apprentice. It might sound weird, but it's also weirdly convincing. Let's dive in.

The theory — Redditor u/Capasaurus-Rex has a simple Snoke theory — what if Snoke is the result of splicing together Palpatine's DNA with that of his master, Darth Plagueis? It may sound a bit implausible, but the biggest selling point for this theory is simply the physical resemblance. Darth Plagueis's Muun visage combined with Palpatine's face does look like it would result in Snoke's sunken-in look.

Who is Darth Plagueis?

Darth Plagueis — best known for being the subject of Palpatine's infamous "tragedy of Darth Plagueis the Wise" speech in Revenge of the Sith — was Sheev Palpatine's master before the obligatory Rule of Two-mandated betrayal. While he never appeared in a Star Wars movie, the non-canon novel Darth Plagueis explored his life in depth, from when he killed his own master to the rise of Palpatine as a Senator and a Sith.

Part of this novel recounted Plagueis's experiments with cloning, experiments Palpatine mentioned to Anakin decades later. Plagueis was searching for the key to eternal life and never found it, and while Palpatine did in fact find a way to lengthen his life through cloning, it wasn't the most effective method. Therefore, both Palpatine and Plagueis would have used their own genetic material in the method. Wouldn't combining them be the best way to create a new puppet leader?

While Snoke may remain the last mystery of the Skywalker Saga, an inclusion of Darth Plagueis's genetic material means a tie to the Sith's past. Could The Mandalorian Season 3 reveal the Muun's involvement just as Season 2 confirmed the cloning?

The Inverse analysis — Regardless of whether or not it's made canon, it's interesting to think of Snoke as the "child" of Plagueis and Palpatine, created to continue the legacy of the Dark Side even more than a half-century after Plagueis's death.