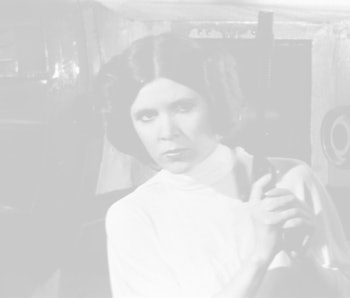 Even after nine Star Wars movies and a bunch of spinoffs all about the Skywalker family, there’s still a lot we don’t know about their saga. But that could change very soon.

If one prominent fan theory about The Bad Batch is true, it’s very possible Star Wars canon is about to dive much deeper into the most-underrated step-dad in the entire faraway galaxy. That’s right, we’re talking about Bail Organa, and what he was up to right after Order 66 in Revenge of the Sith.

Could Bail’s backstory — and by extension the childhood of Princess Leia — suddenly be getting a retcon? Let’s dive in.

Who’s that hologram in The Bad Batch?

At the end of The Bad Batch Episode 6, “Decommissioned,” the series teased a new mystery character — someone on the other end of a holographic transmission contacted by the Martez sisters, Trace and Rafa. But who was that person? While there’s a strong case to be made that it’s Ahsoka Tano, in terms of the timeline and motivation, it’s also equally plausible it’s Bail Organa.

Why? Well, in terms of patient zero for founding members of the real-deal Rebel Alliance, Bail was there when Order 66 happened and also personally rescued both Yoda and Obi-Wan Kenobi.

His adopted daughter is, of course, Leia Organa, the secret daughter of Anakin Skywalker and Padmé Amidala. And outside of some books, comics, and some non-canonical scenes from the old NPR Radio Drama, Leia’s upbringing on Alderaan isn’t something we’ve seen a lot of.

The case for Baby Leia in The Bad Batch

While Bad Batch writer Jennifer Corbett has gone on record saying that “the Batch can’t just go join the Rebellion” at this point in the Star Wars timeline, that doesn’t mean that can’t cross paths with some founding members of that said Rebellion. In fact, they already have. In the first episode, the Bad Batch met Saw Gerrera, a rebel so rebellious that the Rebel Alliance would disown him by the time of Rogue One.

But are Trace and Rafa working for Saw... or Bail Organa? If you ask Twitter, fans overwhelming believe it’s the latter. And with ten more episodes to go in Bad Batch Season 1, the idea that we could see Bail organizing the seeds of the Rebel Alliance means we could also see Breha Organa — Leia’s adoptive mother — as well as Baby Leia! Could the Batch meet Leia? Could Omega bond with the baby?

In theory, Bail would be super nervous about Clones trained to kill Jedi hanging around his Force-sensitive daughter. But, in the classic trilogy, Darth Vader is totally unaware that Leia has a super-high midi-chlorian count. Why? Does something happen when Leia is a baby that helps shield her from Force-detection? Could we learn that secret on The Bad Batch? It’s a stretch but... maybe.

The Bad Batch could feature time-jumps

Thinking about a possible Organa-family connection with The Bad Batch also really makes you wonder if the show is just going to stick to its 19 BBY post-Order 66 timeframe. Will the series really spend the next ten episodes in “real-time” following the Batch around the freshly Empired galaxy?

With so many interesting threads to pull on (including Bail and baby Leia) it feels like that at some point, this series won’t be content to keep us in this time period. For example, if the Batch does make a connection with Leia as a baby (again, wild theory) wouldn't it be nice to see that connection play out when Leia’s a little older? Will fans really be okay if the series ends with Omega still a kid?

If The Bad Batch continues to make interesting connections between the 19 BBY time period and the rest of the Star Wars timeline, it feels like at least one time jump could be on the table. Both the Rebels finale and The Clone Wars finale featured small time-jumps in their final moments. Could The Bad Batch triple-down? And in doing so, could we learn something new about some famous characters?

With ten more episodes left, there are potentially a lot more huge surprises coming. The odds of seeing baby Leia might seem slim, but you know what Leia’s good buddy Han says about the odds.

The Bad Batch airs new episodes on Disney+ on Wednesdays.