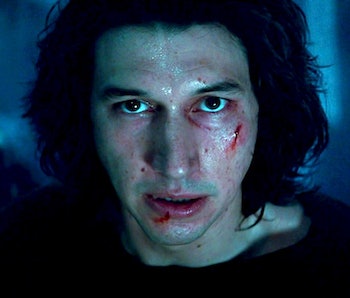 For most Star Wars fans left cold by The Rise of Skywalker, the biggest problem with the film is that it avoided risks in favor of a middle-of-the-road storyline.

To be clear, there’s a lot to love about The Rise of Skywalker, from the intricate creatures to the epic space battle to Ben Solo’s good boy sweater. The so-called “final” episode of the Skywalker Saga wasn’t a complete disaster. But it could have gone in an edgier direction — and no, we’re not talking about Duel of the Fates, Colin Trevorrow’s Episode IX that was scrapped in favor of Rise. We’re talking about Rise itself, and a scene that was shot for the movie — one that would have bent the entire tone of the movie toward the Dark Side.

Ever since The Rise of Skywalker came out in December 2019, there’s been a rumor of a very dark scene between Kylo Ren and Chewbacca that was shot — and ultimately cut — by director J. J. Abrams. The sequence, which appears to be featured in leaked-concept art, would have seen the First Order leader torture Chewbacca after capturing the faithful Wookiee, following the scene in which Rey shoots Palpatine-style Force-lighting from her hands.

Now, contemporary Chewbacca actor Joonas Suotamo himself has spoken about the rumored scene, in the form of an upcoming book chronicling his time as the legendary Wookiee. (As of this writing, there is no English-language release date for the rumored Joonas Suotamo memoir. He has recently tweeted (joked?) that he’s written “a 400-page analysis of a Life Debt's impact on the Wookiee familial structure.”)

According to an excerpt posted on Twitter, Suotamo (who has played Chewie since The Force Awakens) has written about a scene filmed between himself and Adam Driver for The Rise of Skywalker which would have fully shown Chewbacca’s torture at Kylo Ren’s hands.

According to the leak, Driver seemed to go deep into method acting to make the scene work, and “psyched himself to be a real monster through it all, with the cameras on or off.”

The leak also claims that Driver didn’t speak to Suotamo during the breaks and that Suotamo worried that the inclusion of the scene might have hurt the arc of Ben Solo’s character journey: “Perhaps the transformation of Kylo Ren into Ben Solo would also have suffered with such an inhumane act that some viewers would see it as unforgivable even though he ended up saving the entire galaxy.”

Assuming these leaks and rumors are true, the biggest question is obvious: What does The Rise of Skywalker look like if you place these scenes back into the movie? Could Kylo Ren’s road to becoming Ben Solo again have actually worked if we watched him torture Chewbacca earlier in the movie?

In The Empire Strikes Back, we saw Darth Vader torture Han Solo, and in the same film, cut off Luke Skywalker’s hand. Even the most cynical Star Wars fan would agree that the moment when Vader turns against the Emperor to save Luke in Return of the Jedi is a moment that works. Whether or not you think Darth Vader is redeemed is another question. Does the moment work? Yes.

Similarly, does the Rise of Skywalker moment when Kylo Ren teams-up with Rey to fight the Knights of Ren work? Again, yes. But how would Chewbacca’s torture have impacted that moment? Is torturing the beloved Wookiee bridge too far?

If the deleted torture scene was designed to show us how Kylo was starting to have second thoughts about his path, that’s one thing. But if it was more one-note, edging closer and closer toward never being able to escape the Dark Side, then it’s really hard to see how it would have worked with the on-screen narrative.

In many ways, Chewbacca isn’t just a character; he’s almost like the collective Star Wars fandom’s family dog. Watching Kylo torture Chewie ... it would have made The Rise of Skywalker the darkest Star Wars movie of all time, somehow, it would have been even worse than Kylo Ren killing Han Solo. Search your feelings: you know it to be true.

Star Wars: The Rise of Skywalker is streaming now on Disney+.