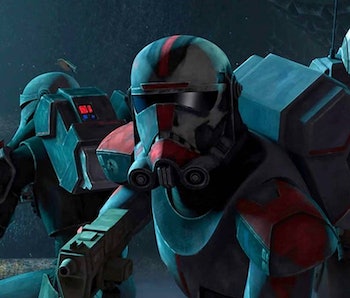 This article about Season 2 of the series Star Wars: The Bad Batch was originally published on February 25, 2021 and updated on January 16, 2022 following the release of the season on Disney+. Read on for the original article, with some new changes to reflect the latest updates on this topic.

What happens when you clone someone wrong? Ever since Obi-Wan mentioned "the Clone Wars" to Luke in A New Hope, Star Wars fans everywhere have wondered just how rowdy things could get in a never-ending space battle involving clone armies. And after seven seasons of The Clone Wars and the films Attack of the Clones and Revenge of the Sith, in theory, we've finally been told everything we need to know about Clones in the Star Wars galaxy.

The newest animated Star Wars TV series, The Bad Batch, finally gives us a little bit more variety in the world of Clone Troopers. First introduced in Season 7 of The Clone Wars, a group of off-beat ("bad") Clones now have their own TV series, wedged between two Star Wars trilogies. Here's everything we know about The Bad Batch, including the release date, the timeline, the creative team, and cameos.

When was The Bad Batch Season 1 release date?

The Bad Batch debuted on Disney+ on an exciting day: May 4, 2021, also known as Star Wars Day. The news was confirmed on February 24. May 4, 2021, was a Tuesday, but subsequent episodes dropped on Fridays (the typical day of the week for new Disney+ releases at the time).

What is the timeline for The Bad Batch?

The Bad Batch takes place right after Order 66 in Revenge of the Sith, as the Emperor "reorganizes" the Republic into the Empire. In Star Wars timeline-speak, that means The Bad Batch begins in roughly 19 BBY.

Is there a trailer for The Bad Batch?

Yes! In December 2020, IGN debuted a trailer for The Bad Batch. Notable Star Wars characters in this trailer (other than the Bad Batch themselves) are Grand Moff Tarkin and Fennec Shand of The Mandalorian fame.

What is the plot of The Bad Batch?

The Bad Batch focuses on Clone Force 99, AKA "The Bad Batch," formally introduced in The Clone Wars Season 7, although the concept was much older. These Clones are "accidents" created by the cloners on Kamino, resulting in subjects who look and act differently than the "normal" Clones. Because the Bad Batch is seen operating independently, they were immune to Order 66.

The series has the titular group going on daring mercenary missions as they attempt to navigate a rapidly-changing universe after the Jedi genocide. Complicating the situation is one of their stowaways: A young fellow defective clone named Omega. Their new passenger is a person of interest, prompting several familiar faces to chase them down and retrieve her.

Who is in The Bad Batch cast?

For the most part, the cast of The Bad Batch consists of voice actor Dee Bradley Baker playing all the different members of the squad. Since 2008, Baker has voiced the Clone Troopers in the animated versions of The Clone Wars and Rebels. Canonically, Baker represents Temuera Morrison's voice, who played Jango Fett and all the Clones in the prequels, not to mention Boba Fett in The Mandalorian and spinoff The Book of Boba Fett. Michelle Ang voices the new clone character Omega.

Who wrote The Bad Batch Season 1?

Dave Filoni serves as the executive producer of The Bad Batch. But the head writer was fellow-producer Brad Rau, who previously worked on Star Wars Rebels and Star Wars Resistance. Athena Portillo, Carrie Beck, and Josh Rimes also produce. Basically, if you've followed animated Star Wars for the past several years, nearly all the same storytellers are involved.

Was The Bad Batch renewed for Season 2?

Yes! In August 2021, near the end of the first season, Disney announced The Bad Batch was renewed for a second season. Season 2 is set to premiere in 2022, though the exact release date is unknown.

Star Wars: The Bad Batch is currently streaming on Disney+.