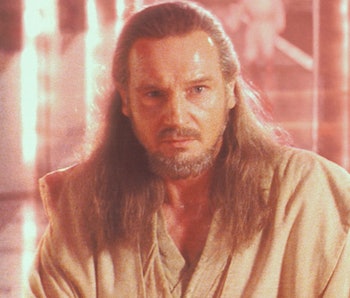 Where were the Jedi while the Force was getting unbalanced? One upcoming big live-action Star Wars TV series may finally solve several lingering questions created by the prequel era and The Phantom Menace in particular.

In a recent interview, Acolyte showrunner (and Russian Doll maestro) Leslye Headland revealed the timeline setting for her new Star Wars series — and why she choose that era in specific. Instead of being a Phantom Menace-hater, it sounds like Headland really digs Episode I, and she’s using the mysteries embedded in that film as a kind of springboard for the narrative of Acolyte.

Here’s why the timeline reveal for Acolytle is fascinating, and how this upcoming series may fix a few lingering questions we’ve all had about the last days of the Republic.

When does Star Wars: The Acolyte take place?

In a recent interview with The Wrap, Leslye Headland established the time period for The Acolyte, revealing the show will happen during “The final days of the High Republic era, a period roughly 200 years before the events of George Lucas’ 1999 film Star Wars: Episode I — The Phantom Menace.”

This means The Acolyte happens perhaps 30-something years after the current run of High Republic novels and other tie-in-media. The Light of the Jedi is set in 232 BBY, so if Acoltye is depicting the end of the High Republic, that’s three decades after any of the existing High Republic books. In effect, the High Republic books might have the same canonical relationship to Acolyte that the prequel films have to the classic trilogy.

Then again, because there’s a buffer of several decades, it’s also possible Acolyte won’t reference the actual High Republic books and comics at all.

Will Acolyte change The Phantom Menace?

In the Wrap interview, Headland dropped a huge clue as to why she choose this period of time for the new series. Around the time Phantom Menace released, she was discovering her own LGBTQ identity and that the film’s themes of independence appealed to her teen self.

Additionally, from a “fan brain” perspective on wonky Star Wars canon, she said this:

“I actually was very intrigued by why George Lucas had started us at that particular point. I kind of wondered, but what happened to lead up to this?...why are the Jedi like this? When they are in power, why are they acting this way and how is it that they’re not having the reaction that you would think they would to Anakin’s presence and what Qui-Gon Jinn is saying about how passionately he feels about training him and bringing him into the fold. It’s like, even the discovery of Darth Maul is kind of met with this like, ‘Hm, interesting’ kind of feeling. So I just think for me, my brain has always buzzed around that area and wondered what’s going on here — or what has been going on here.”

This comment strongly suggests that The Acolyte will explore not just different aspects of the Force, but also could explain the politics of the Force. By the time of The Phantom Menace, in theory, Darth Sidious has already been using the Dark Side of the Force to “cloud everything.” But how the hell did that happen?

As Headland suggests, it seems like if everyone just listened to Qui-Gon, things would have gone down very differently. In a sense, the Star Wars prequels have always demanded their own prequels and it sounds like Acolyte might fit that bill.

Will Yoda appear in Acolyte?

Because of the timeline placement, Yoda will be about 664 years old if Acolyte happens exactly in the year 200 BBY. So he could totally appear in the show, but that doesn’t mean that he will. Headland makes it pretty clear in her interviews that she wants Acolyte to appeal to someone who has never seen any Star Wars before, and she cites The Mandalorian as her model:

“My mom, who has like a passing understanding of what Star Wars is, can watch Mandalorian and really get invested in the central connection between the main two characters, because it’s universal, because it’s deeply, deeply emblematic, I think, of what George Lucas wanted to bring to the world when he created it.”

So, from a certain point of view, maybe that means Acolyte won’t have much to do with the existing Star Wars canon at all, save for maybe certain aspects of the Force. And just because Yoda is alive, that doesn’t mean he’ll appear.

Or, maybe, this all a Jedi mind-trick, and this is just what Headland wants us to think. Maybe Headland and company are just saving a younger Yoda, or any other big cameos, for that distant, and possibly game-changing, second-season finale.

Star Wars: The Acolyte does not yet have a release date.