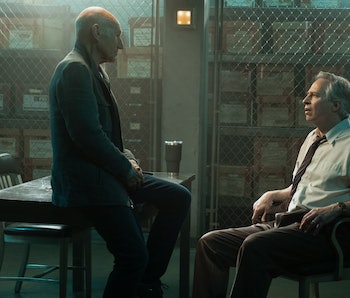 In many science fiction stories, aliens live among us. In the futuristic status quo of most of Star Trek, that’s no big deal. But what Picard Season 2 suggests is that there are a lot Star Trek aliens living on a contemporary Earth. In fact, it feels like the franchise could very easily create a spinoff series that would become Star Trek canon’s version of The X-Files. Here’s why. Spoilers ahead for Picard Season 2, Episode 8, “Mercy.”

Even before the crew of the La Sirena arrives from the year 2401 there are already several aliens secretly living on Earth. First off we’ve got Guinan, a centuries-old El-Aurian who’s been passing as a human since at least the 19th century. We’ve also got Tallinn, an undercover Romulan who works as a “Watcher” and “Supervisor” for a group of elusive advanced aliens who operate somewhere off-planet.

And then, as revealed in Picard Season 2 Episode 8, we’ve got Vulcans surveying Earth sometime in the late 1970s or early 1980s. Picard writer Kirsten Beyer tells Inverse that the exact year when young Wells (Jackson Garner) meets Vulcans wasn’t indicated “on purpose,” but that the late ‘70s or early ‘80s is a good guess. More to the point, the moment where FBI Agent Wells (Jay Karnes) met Vulcans in the woods when he was a kid also echoes the 2002 Enterprise episode “Carbon Creek,” in which we learned some Vulcans crash-landed on Earth in the 1950s. Rounding all this out is Alison Pill’s new hybrid Borg Queen, the leader of a race of cyborgs who are alive in the 21st century but mostly confined to the Delta Quadrant.

Now, in Trek canon, formal first contact between humans and aliens (specifically the Vulcans) doesn't happen until 2063. But now it seems like a slew of aliens have been embedded on Earth for a very long time.

The case for Star Trek’s own X-Files

Before playing Agent Wells in Picard Season 2, actor Jay Karnes played Ducane, a 29th-century Starfleet time agent, in the Voyager episode “Relativity.” Combined with Orla Brady as Tallinn and Ito Aghayere as Guinan, it’s almost like a present-day Earth Star Trek spinoff is just begging to be created. What if Wells teamed up with two aliens — Tallinn and Guinan —to track down less-than-friendly alien menaces?

Right now this is just wishful thinking, but Picard Season 2 has revealed a huge amount of Star Trek canon just sitting around in the 21st century. What would it look like to see a Star Trek show from the perspective of humans discovering classic Star Trek aliens hiding out on Earth?

Interestingly, this almost happened before. In 1968, Star Trek creator Gene Roddenberry briefly tried making a spinoff series based on “Assignment: Earth,” the TOS episode which introduced Gary Seven and the Supervisors that Picard recently reintroduced.

Picard Season 2 has demonstrated that setting a Star Trek series on Earth doesn’t necessarily limit the potential for wild sci-fi ideas. We already know that Picard Season 3 will return to a starship-based story, but there seems like a staggering amount of potential for Trek to tell stories set in the 2020s. After all, where did Michelle Yeoh’s Georgiou end up after she stepped through the Guardian of Forever? Between Agent Wells, Tallinn, Guinan, and Georgiou, the Trek canon has a potential 21st-century dream team. Will we ever see it? It feels unlikely, but as Spock once said, “there are always possibilities.”

Star Trek: Picard airs its last two episodes over the next two Thursdays on Paramount+.