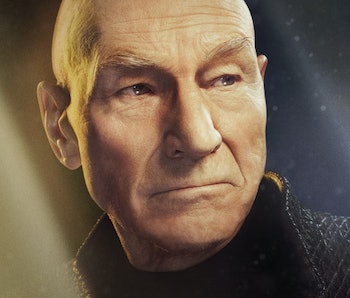 Jean-Luc Picard will not battle an old-school villain next year. As Star Trek: Picard warps towards its finale with Season 3 in 2023, one very credible fan theory about the big bad for that season has been debunked. Here’s what that theory was, why it made a lot of sense, and how recent comments from Picard showrunner Terry Matalas changed everything. Speculation ahead.

The plot of Picard Season 3 is still shrouded in mystery

Although a new trailer for Picard Season 3 was revealed at San Diego Comic-Con 2022, other than a few very brief hints, we actually don’t know much more about the story than we did back in April 2022.

In fact, the teaser in April 2022 actually had very brief footage from the upcoming season, while the new trailer was focused more on the characters, but out of context from actual scenes from the show. So, in a sense, although we got a better sense of the way the beloved TNG characters will appear (Worf!), we’re not any closer to having any major plot details.

All we know about Season 3 is that The Next Generation cast is returning, that the story will be set-aboard a starship, that we’ll see at least one version of the USS Enterprise, and that the entire season will serve as a send-off for the TNG crew. And, as confirmed by Alex Kurtzman on the SDCC panel, the villain for this season identifies as female.

A few weeks back, on the Inglorious Treksperts podcast, Picard showrunner Terry Matalas teased that Season 3 would have even more returning TNG characters. Then, after Kurtzman mentioned that the villain for Season 3 was a “she,” Trekkies began putting two-and-two together. If another legacy TNG character is returning, and the villain is female, does that mean ... Sela (Denise Crosby) the half-human/half-Romulan baddie — and daughter of Tasha Yar — might make a huge comeback for Picard Season 3?

To be fair, this theory makes a lot of sense. Sela has ties to the TNG crew, she was a militant leader for the Romulans, and Jean-Luc’s history with the Romulans has been a huge part of both seasons of Picard. But ... it turns out ... it’s not to be!

On Twitter, Terry Matalas specifically said: “It’s not Sela. It is a new character. But here is definitely a nod to Tasha in the new season.”

Matalas’ “nod to Tasha,” is a reference to the first security chief of the Enterprise-D, also played by Denise Crosby: Tasha Yar. Thanks to a complex time travel plot in “Yesterday’s Enterprise,” Tasha had a daughter who retroactively existed in the backstory of TNG. Matalas is now saying that there will be some kind of shout-out to Tasha, but her evil, time-travel-created daughter will not appear.

Who is the Picard Season 3 villain?

Because Matalas and Kurtzman have ruled-out existing characters, it seems possible the notoriety of the villain may come from the reputation of the actor in real life, rather than anything to do with the Star Trek canon. So, if Trekkies are speculating about the villain for Picard Season 3, it’s probably time to start looking at other franchises for inspiration. After all, who wouldn’t love to see Cate Blanchett or Tessa Thompson on Star Trek? Heck Rosario Dawson has already pitched herself as a Star Trek alien, maybe it’s time to make it so.