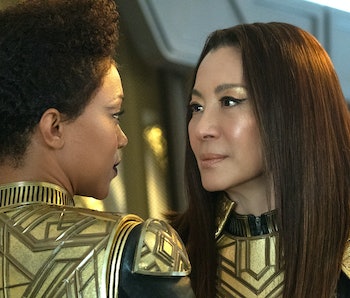 Music has always pushed Star Trek's stories into warp drive. In Discovery Season 3, a haunting melody becomes central to understanding the "the Burn," the galaxy-wide cataclysm that fractured the Federation and changed space travel in the Trek canon. The crew of Discovery must unravel the secret behind this piece of music to reveal the galactic secrets of the Burn, and possibly circumvent or otherwise undo this terrible fate.

In previous iterations of Star Trek, diegetic music — or "in-universe music" — has rarely been a major component of the narrative. (TNG's "The Inner Light," in which Picard played a piece of flute music that evoked the memories of a long-dead planet, is a notable exception.) But tracking down the meaning of an ethereal melody has become key to Starfleet's latest mission. To unpack this musical mystery, Inverse caught up with composer Jeff Russo. Here's what he revealed about Discovery, Picard, and even Strange New Worlds.

Since 2017, Russo has picked up a torch previously carried by more than a dozen different composers. In the past three years, he's composed the title music for Discovery and Picard, amounting to about 40 hours' worth of new Trek music in total. This makes him the person who has had the largest impact on the sound of Trek in the 21st century. But if you're looking for a ton of musical Easter eggs and throwbacks in Discovery, Russo says you won't find them.

"With Picard, I did think it was important to reference some of the Jerry Goldsmith music [from TNG and The Motion Picture], and the Voyager theme for Seven of Nine. It was nice to be able to do that," Russo tells Inverse. "With the Picard theme, I did nod to the Jay Chattaway music from "The Inner Light," but I didn't actually quote it."

While Picard is a smorgasbord of sonic Trekkie Easter eggs — from the TNG theme, to notes from Fred Steiner's TOS "Romulan Theme" — Discovery has largely been focused on itself.

"I do use Alexander Courage’s them for TOS in Discovery. Like, when we’re trying to make it feel really big, like when we see Starfleet, I might use that theme to really drive that home," Russo explains. "In Seasons 1 and 2, it was more important to me to tie Discovery to The Original Series. But now, we have more call-backs to music from previous seasons."

"We’ve had Mirror Georgiou for a while, so I’m alluding to it a little bit all the time," Russo says. "With this season, I had to do that a little more as we get further along in her story, even though we’re not sure if it’s reality, hallucination, or what’s going on. At least, I wanted to pretend we don’t know."

By the conclusion of "Terra Firma Part 2," audiences will probably know for sure what's going on with Georgiou and the Mirror Universe, but the mystery of the cello music played by Gray (Ian Alexander) will persist, perhaps until the Season 3 finale of Discovery. Unlike other music Russo has composed for Trek, the music on Gray's cello was created before Season 3 was filmed, not after.

The music from Gray's cello appears in the Federation seed ship from episode 5, "Die Trying," as well as the distress signal emanating from the heart of the Verbuin Nebula. At this point, the meaning and origin of the song have yet to be revealed, but just like we heard two versions of "Blue Skies" at the beginning and end of Picard Season 1, it seems reasonable we'll be hearing another version of the "Tal Lullabye," before this season of Discovery comes to an end.

After that, Russo will score Discovery Season 4, as well as the impending Picard Season 2 and more facets of the ever-expanding Trek universe.

"I’m starting to think about the second season of Picard, and there’s a lot going on there," Russo admits. "With Strange New Worlds, I've talked [to Alex Kurtzman] about what that show is, and how that show should be treated musically. How I’m going to be involved in it has yet to be determined, because there’s so much going on. So right now, I can't tell you."

Star Trek: Discovery Season 3 is streaming on CBS All Access.