On the right Trek 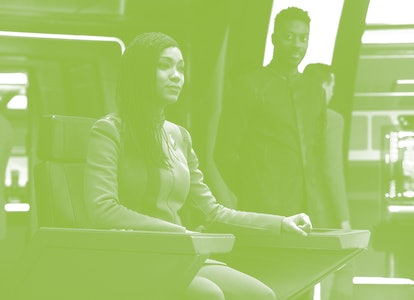 There's a half-decent chance you're not crazy about Star Trek if you prefer rewatching The Martian or thumbing a Kim Stanley Robinson novel.

Although Trek is credited with inspiring real NASA astronauts in the '70s and '80s and recently serving as the partial inspiration for the Artemis Accords, the actual scientific plausibility of Star Trek is inconsistent at best. Yes, Gene Roddenberry consulted with the Rand Corporation and NASA's Jet Propulsion Laboratory during the original '60s series, by the time of The Next Generation, former science advisor Naren Shankar joked that "the fake science of Star Trek" meant that he had to write technobabble that amounted to "spraying this thin metal coating of science on the show."

See also: Everything we know about Star Trek: Discovery Season 4

So, has all of that changed in the 32nd Century of Star Trek? Should it? Recent comments from producer Alex Kurtzman have indicated that Star Trek: Discovery Season 4 could move into the realm of harder science fiction. Here's what that might mean for viewers.

But first: How did TV and movies get you through the pandemic? We want to hear from you! Take this quick Inverse survey.

Discovery's new villain — As reported first by TrekMovie, and reblogged all over, Alex Kurtzman recently revealed during a Deadline panel that the big bad of DISCO Season 4 might not be alive, exactly.

"There have been many kinds of villains over the course of Star Trek. What happens when the villain is not actually any kind of living, breathing entity, but something else?

"How do you solve that problem?" the producer wondered aloud in that panel discussion.

Kurtzman's comment could suggest that the next DISCO villain might be another rogue AI, kind of like Control from Season 2. But, he also said: "We’re actually exploring — we’re diving deep into science — in the fourth season, in a kind of new and interesting way."

Discovery actually began with some far-out science fiction. Although Discovery Season 1 seems like a distant memory in some ways, the off-kilter "Spore Drive" introduced in the third episode, ever — "Context Is For Kings" — actually has some basis in theoretical science. Paul Stamets (Anthony Rapp) is actually named for a real-life mycologist who has written several books on mycelium.

In 2017, Inverse spoke with a few leading mycologists to determine how fake the Spore Drive on Discovery really is, and the answer was: It's fake, but not entirely impossible. "It’s unlikely...but not impossible," University of California, Berkeley mycologist Thomas Jenkins told us then.

This isn't to say that Discovery is suddenly a hard science fiction show like The Expanse. But theoretical science did form the premise of the show. Like Shankar's "thin metal coating," Discovery began its journey with a closer connection to real science.

Contrast that with, say, something like the first J.J. Abrams Star Trek reboot, which had a premise that revolved around a Romulan ship using a giant space drill to create a hole in a planet and then dropping something called "red matter" into it. The Spore Drive may be implausible, but it's not outright fantasy.

Star Trek has always paid lip service to real science. Whether or not Neil deGrasse Tyson is totally happy with everything that happens in a given episode of any Star Trek does not distract from the point that Trek has always tried, even a little bit. As a Trek person, I may be biased, but that little bit of effort is still a lot more than most popular sci-fi. Here are three examples of that real-science efforting in Star Trek:

Like all of the rest of the Final Frontier, Discovery has to stick to Trek canon more than it has to stick to real science. In some cases — like with artificial gravity and an abundance of humanoid aliens — Trek canon can't suddenly create hard SF reasons for things that make little to no sense. Even the lack of seatbelts on (most) Starfleet ships is kind of a problem.

Kurtzman mentioning the idea of a non-living adversary, combined with the idea of the show going "deep" into science, seems to suggest that the next season might be a little different than the previous three. Star Trek might never be scientifically accurate — and it probably shouldn't be. But, if the fiction part of the most successful science fiction TV show ever doesn't change much, then maybe the science could grow up a little bit. After all, now that the DISCO crew is all the way in the 32nd Century, maybe they can start actually learning about something new.

More like this
Science
8.12.2022 2:00 PM
Biologists fired tardigrades out of a high-powered gun — the results have implications for alien life
By Kiona Smith
Science
8.9.2022 3:00 PM
Aliens could move entire planets to send a math-based code to other civilizations
By Kiona Smith
Science
8.5.2022 12:15 PM
10 years ago, the Curiosity rover arrived on Mars — and revolutionized the hunt for alien life
By Allie Hutchison
Related Tags
Share: