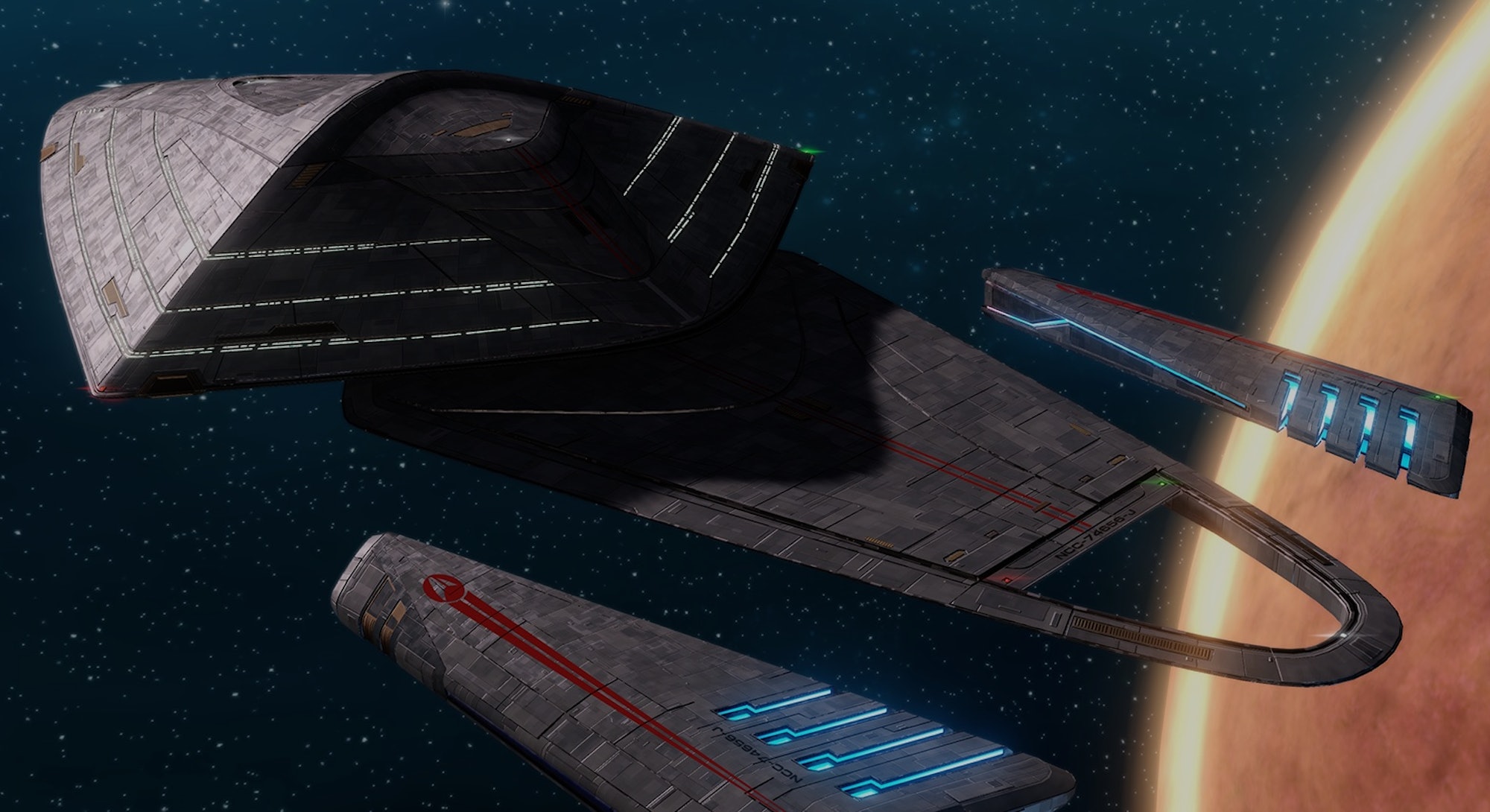 What keeps a multiverse together? If you ask the people who make Star Trek, the short answer is “planning,” and lots of it.

For the creatives tasked with crafting the expanded Star Trek canon, operating with a space cowboy seat-of-the-pants Captain Kirk vibe doesn’t really work. The long-game of the Trek expanded universe requires more gradual and granular patience. Even when a new Trek show isn’t airing, the franchise keeps boldly going, and that means games, comics, and even high-end starship models. (Don’t call them toys!)

Considering the Trek canon now spans at least twelve centuries of made-up future history, it’s a lot to juggle. As one critical voice behind the franchise tells Inverse, “I think a lot of people don’t really grasp how much goes into making Star Trek. Whether it’s a comic book, whether it’s a game, an episode, or a movie — I don’t know if people know how many moving parts there are, or how much deep-seated discussion there is.”

That voice: John Van Citters, the VP of Creative Strategy and Star Trek Brand Development, effectively the in-house version of the space god “Q” from The Next Generation. Recently, Inverse sat down with Van Citters, as well as three other key members of his “bridge crew,” the brain trust most responsible for keeping Trek’s vast canon consistent. Here’s what they told us about their process, and how they keep Trek going boldly where it’s never gone before.

The Starfleet Behind Starfleet

The people who make Star Trek media outside of the shows think about Star Trek fans just as much — and perhaps even more — than the showrunners, writers, and actors who make the various new series.

After all, when a fan is done bingeing Discovery Season 3 or new episodes of Short Treks, they tend to look for Trek in other media to consume. And since 1970, with the publication of the first original Star Trek novel — James Blish’s Spock Must Die! — the world of Trek has beamed into media spaces outside of TV screens. The difference between then and now is the coordination of all that extra canon is far more integrated than it’s ever been before.

Take Star Trek Online, the MMORPG from Cryptic Studios, as an example. Al Rivera, Cryptic Studios’ design director at the helm of the game, gives Inverse a prime example of how Trek synergizes across platforms: “We have a feature in our game that lets players relive the Synth attack on Mars. That’s something that only happens in glimpses on Picard, but we got to show players what it looked like up close.”

It’s an idea born from a bigger conversation Van Citters has with his closest Trek companions. “Every discussion we have is like, What will fans think of this particular thing?” he says. “But, when you’re talking about fans, you’re also talking about this absolutely vast, broad-spectrum of people from 8 to 80-years-old that are watching and enjoying Star Trek.”

Chase Marotz is another figure responsible for one of the many Trek silos — in his case, comic books. An editor at IDW Publishing, Marotz presides over paneled page depictions of Star Trek, such as the comic book Picard: Countdown, released shortly before Star Trek: Picard debuted. The comic serves as an origin story for Jean-Luc’s Romulan compatriots Laris and Zhaban. If you hadn’t read this comic before watching Picard, you wouldn’t have been confused about the new show — but the vast amount of world-building in just three issues is a key example of how the expanded Trek canon crosses mediums.

“A benefit of Star Trek being so active now is that the shows are being produced simultaneously with the comics tied into those shows,” says Marotz. “We have a level of access that I think is very beneficial to our line that that other series didn't necessarily get in the nineties or eighties.”

Marotz cites Mike Johnson, who co-wrote Picard: Countdown with Picard and Discovery producer Kirsten Beyer, as a secret weapon in facilitating relationships with the various Star Trek series’ storytellers. “He figures out what’s going on on those shows that IDW can use to closely tie into canon,” says Marotz. “Hopefully, that means our comics stand the test of time because it's so linked with the show and what they're doing in the writers' room.”

In Star Trek, what counts as canon?

For Star Trek diehards, what counts as true canon is a never-ending debate.

Back in 2009, IDW comics put out a different Countdown comic, one that just addressed the backstory of the 2009 reboot film. Where did Nero come from in the 24th Century? What was Picard’s role in helping build Old Spock’s time travel ship? All of those questions were answered in that comic, even though these days, the events of Star Trek: Picard have made various aspects of that comic mostly apocryphal. Nonetheless, Van Citters cites that 2009 comic miniseries as one of the aspects of the expanded Trek universe he’s still the proudest of.

“That series is a perfect example of what makes this stuff work,” Van Citters explains. “You don't need to read them to enjoy the movie, but if you do read them, you get a whole different layer of meaning. Canon is in the eye of the beholder. If you feel a novel fits in so perfectly, or if a game storyline or some of the comic stories that we've done over time dovetails so nicely with your view of the universe, then, by all means, make it your own canon.”

Sometimes onscreen canon isn’t always the final frontier when it comes to real Star Trek canon. This may sound paradoxical, but when you zoom-in on spaceship parts, it makes perfect sense — and few people know spaceship parts better than Chris Thompson, brand manager at Eaglemoss, the collectible manufacturer responsible for some of the best Trek models around. By and large, Thomspon and his colleagues at Eaglemoss opt for the intent of what the various starships are supposed to look like, rather than strange details that might have been present on the shooting models. For example, back in the 90s, one shooting model of the Enterprise-D from Star Trek: The Next Generation had a “coffee ring stain on top of the ship.” Obviously, when you get the various versions of the Enterprise-D from Eaglemoss, this aspect of accidental canon doesn’t come with the purchase.

“Spoiler, but there’s no coffee stain on there,” Thompson says with a laugh.

The idea that a commercially made Star Trek toy or model could be more canon than onscreen canon has an interesting precedent, one that predates the contemporary post-Discovery Trek TV explosion.

Back during the run of the prequel series Enterprise, a toy company called Art Asylum produced a playset that featured the 2151-era Starfleet phase pistol and communicator. But, by the third season of Enterprise, the producers of the show replaced the in-house props with the toy version. In short, the phase pistols created for the fans were actually better than the ones on the show — and so, just like the current games, comics, and spaceship models, merch marketed at Trekkies, it became the real deal.

In Discovery Season 3, this ship wasn’t explicitly identified as a Janeway-class ship. But CBS/Paramount tells Inverse, “The U.S.S. Voyager you see is a 32nd-century Intrepid-class starship.” So which is it, Janeway-class or an Intrepid-class? Rivera says it’s kind of both.

“That one was trickier,” he admits. “Our game takes place in 2410, that ship is from 3188. So, we went through some gobbledygook that a temporal agent scanned the timeline and found this thing and were inspired to make it with 2410 parts. Whether or not that will become canon on screen, we’ll see.”

In Discovery Season 1, in the episode “Lethe,” after Ash Tyler (Shazid Latiff) says he’s “from Seattle,” Captain Lorca (Jason Isaacs) points out that Tyler is lying a little bit because he grew up “24 kilometers from Seattle, which makes you not exactly from Seattle.” Tyler is taken aback. Lorca says: “I like to split hairs.”

Some Trek fans are the same. But, just like you can have a toy phaser also become a real one, and a starship can exist in two different timelines and have entirely different names, Trek likes to change its story all the time, even when splitting hairs.

Are most Trek fans worried about these specific changes to canon? Does it matter if the 2009 Countdown comic isn’t canon, but (for now) the Picard countdown comic (mostly) is? Van Citters thinks that the vast majority of fans aren’t really like Captain Lorca. The cliché of the nitpicking Trekkie is just that: a cliché.

“Star Trek fans just love watching the shows,” he says. “They love it. But they’re not leaving the house every day clad head to toe in a Starfleet uniform. They’re not constantly searching social media for everything an actor has said about Star Trek. It’s like hardcore New York Yankees fans who sit on the message boards and question everything one of the managers has done. Or, most fans who just wear a Yankees hat every once in a while and catch a game when they can. We make Star Trek for those people, too.”