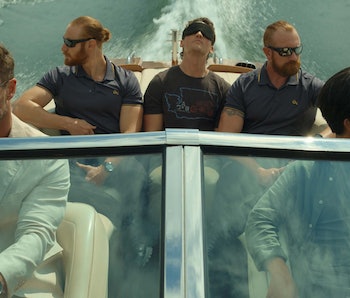 The test isn’t really the test. While the new Netflix sci-fi drama Spiderhead isn’t entirely reliant on a twist ending, the plot does turn on a big last-minute pivot that audiences might not see coming. Here’s what happens in the twist ending of Spiderhead, and how it changes one aspect of the original George Saunders short story. Spoilers ahead.

Throughout the movie, it’s made clear that Steve Abnesti (Chris Hemsworth) is testing mind-altering drugs with deeply questionable methods. Verbaluce increases someone’s ability to speak eloquently, for example, while Darkenfloxx makes you depressed. But there’s one drug that’s been hidden, a red vial slipped into everyone’s drug regimen, that ends up as the key to the whole story.

In an important scene just before the end of the movie, Jeff (Miles Teller) confronts Abnesti with the truth: One secret drug, “B-6,” has been at the center of all the twisted experiments, and all the other drugs are ancillary. While those drugs can help people fall in love or create phobias, B-6 is designed to make people obedient. Abnesti was never interested in testing drugs he already knew worked. He was testing to see how those drugs would impact an experimental drug that makes people do what they’re told.

There’s an obedience drug in the original short story too, but it’s used much differently.

How Spiderhead changes the ending of the George Saunders story

Spiderhead is based on a 2010 short story by George Saunders called “Escape from Spiderhead,” which later appeared in his 2013 story collection Tenth of December. If you read it, you’ll find a few differences between it and the new Netflix movie.

While Spiderhead is spiritually faithful to the Saunders story, the plot twist involving an obedience drug is pretty different. In the story, B-6 is called “Docilryde,” and its existence is not a secret. In fact, Abnesti complains about needing to get a waiver to use it on people, saying “What good’s an obedience drug if we need his permission to use it?”

It may seem like a small change, but in the story the drama doesn’t come from a big reveal, but rather Jeff’s interior struggles. The approach Saunders takes to “Docilryde” is to make it, just like everything else, wrapped up in corporate red tape. The Netflix version skips this step and connects the corruption of the drug tests to Abnesti’s egomania.

This makes the story and the movie very different, but both excellent in their own ways. Without this new twist, Hemsworth’s Steve Abnesti couldn’t have been as horrifying, which is arguably what makes the movie work.

Spiderhead is streaming on Netflix now.

More like this
Entertainment
8.10.2022 11:00 AM
The one reason Dune: Part 2 will be so radically different than Dune: Part 1
By Ryan Britt
Entertainment
8.4.2022 12:00 PM
How sci-fi writer Blake Crouch turned gene-editing tech into a Spielbergian epic
By Jeff Spry
Culture
8.9.2022 11:30 AM
You need to watch the grittiest alien invasion movie on Netflix ASAP
By David Grossman
Related Tags
Share: