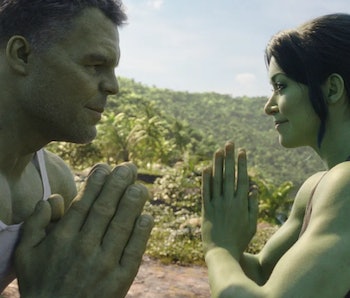 She-Hulk is bringing a lot of exciting changes to the Marvel Cinematic Universe. Jennifer Walters (played by Orphan Black alum Tatiana Maslany) provides whole new energy, complete with strange court cases, fourth-wall-breaking jokes, and a lot of flexing. It feels like a fresh take on the superhero genre, but it has roots in one MCU movie you probably wouldn’t connect with She-Hulk’s story. Here’s why you should watch this one top-tier Marvel film before She-Hulk: Attorney at Law smashes its way onto Disney+.

She-Hulk is the first Hulk-centric MCU project in over a decade, but that doesn’t mean the Hulk hasn’t had his fair share of breakout moments. He had his famous “I’m always angry” line in The Avengers, and we’ve seen him go from tortured hero to calm professor and back again.

But one of the MCU’s most interesting Hulk moments wasn’t when he was playing the hero — it’s when he was a “friend from work” supporting Thor Odinson in Taika Waititi’s Thor: Ragnarok. And there’s a very specific reason why you should revisit this classic Hulk movie before you check out She-Hulk for yourself.

Thor: Ragnarok and the Incredible Hulk

Widely considered one of the funniest MCU movies, Ragnarok suits the Fleabag-adjacent tone of She-Hulk perfectly. Its introduction of Valkyrie was a masterclass in creating a girl power moment that’s not too preachy or pandering (a lesson Avengers: Endgame failed to study).

Thor’s most memorable adventure (sorry, Love and Thunder) also has a more direct connection to She-Hulk. In one of the clips teasing the new Disney+ series, a spaceship flying towards Jennifer and Bruce’s car looks a lot like a ship seen on Sakaar in Ragnarok. Considering Bruce’s history as a gladiator on Sakaar, could the movie be hiding an important clue to She-Hulk’s plot?

In fact, the ship looks almost exactly like the Commodore, the Grandmaster’s pleasure vessel that was stolen by Loki and used by Thor, Bruce, and Valkyrie to escape Sakaar. It was also briefly seen as part of the Asgardian refugee fleet in Infinity War. So who’s piloting this ship? Is it the exact one Hulk encountered, or another of the same model? Is it flown by someone who also escaped Sakaar, or someone out to get revenge on the Grandmaster’s behalf? Before we get those answers, it wouldn’t hurt to brush up on the movie that prompted them.

Thor: Ragnarok was a watershed moment for the MCU. Ever since its successful release, more emphasis has been put on comedy and bright visuals, and less on the relatively grounded and gritty stories the MCU started with. She-Hulk: Attorney at Law is the natural evolution of that sea change, allowing the MCU (and Bruce Banner’s story) to push the envelope with weirder characters, more exciting storytelling decisions, and fresh formats.

It can be hard to stand out amid the sprawl of the MCU, but Thor: Ragnarok made its mark, and now She-Hulk: Attorney at Law is jumping off from it. In both style and substance, She-Hulk is on the shoulders of giants — one of whom happens to be her cousin.

This She-Hulk clip contains a ship that looks Sakaarian.