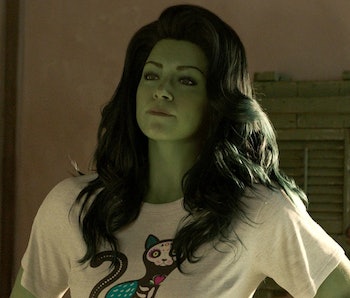 She-Hulk: Attorney at Law was supposed to portray another side of superheroism by showing us a hero fighting legal battles on behalf of her peers. It has the potential to be a goofy MCU take on Law & Order or Suits. But is that actually what we’ll see when the show premieres, or could we get an entirely different experience? A new interview with She-Hulk’s showrunner may have some bad news for crime procedural fans, and reveal a huge missed opportunity for the MCU.

In an extensive interview with Variety, showrunner Jessica Gao explained how Marvel’s executives weighed in on She-Hulk, how the series evolved from the initial pitch, and what other shows influenced their development. Buried in an explanation of Emil Blonsky’s role was a concerning quote:

In my original pitch, it was an actual trial and it spanned multiple episodes. When we got into the writers’ room, inevitably things change as you’re developing the show and as you start writing. And one thing that we all realized very slowly was none of us are that adept at writing, you know, rousing trial scenes.

This isn’t encouraging for fans who wanted She-Hulk to be a court drama with superhero elements. Instead, it looks like it will be the other way around. Aside from the MCU’s general inability to branch out into new genres, there’s a bigger implication here: The MCU still hasn’t tackled the legal implications of a world filled with superheroes.

When Kate Bishop lost her dad in the Battle of New York, was she entitled to a wrongful death settlement? Did the Blip count as an “act of God” to insurance adjusters? What happened to marriages where the non-Blipped spouse remarried? Who’s responsible when an Avenger throws an alien through the walls of your apartment? There are all sorts of legal issues unique to the MCU, and a case-of-the-week format would have been perfect for exploring them.

Maybe She-Hulk will still answer some of these questions, just not in the strict format of a trial scene. Still, it’s a little disappointing to learn that a show starring a lawyer didn’t hire any writers who are experienced with writing legal scenes.

On the plus side, there’s still room for this element to be introduced. If there’s a Season 2 of She-Hulk, it could build on the origin story we see in Season 1 by focusing on the ins and outs of what it means to be a superheroic lawyer in a world irreversibly altered by aliens, lasers, and Hulks. Season 1 can focus on the “She-Hulk” part of the show, and Season 2 can hopefully shift to the “Attorney at Law” portion.

More like this
Culture
Sep. 24, 2022
She-Hulk shows how Marvel can fix its biggest tone problem
By Eric Francisco
Entertainment
Sep. 21, 2022
She-Hulk Episode 6 release date, time, plot, and cast for the Marvel show
By Jeff Spry
Entertainment
Oct. 1, 2022
Who is Hulk King? She-Hulk could be setting up a Secret Invasion villain
By Dais Johnston
Related Tags
Share: