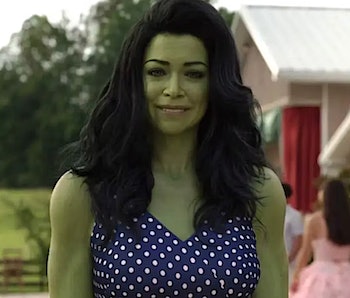 After teasing the return of Daredevil in Episode 5, She-Hulk Episode 6 threw us a curveball in the form of a wedding-themed diversion. So will Matt Murdock (aka, the Man Without Fear) make an appearance in She-Hulk Episode 7? We sure hope so.

Here’s everything we know about She-Hulk Episode 7, from release date and start time to plot, cast, and how many episodes are left of the Disney+ show. But first...

What happened in She-Hulk Episode 6?

Last week’s self-contained wedding episode, “Just Jen,” found She-Hulk packing for an out-of-town bridesmaid invitation in the country that Titania crashes just to be obnoxious. Things get worse when her groomsman turns out to be a cute chihuahua in a tiny tux.

As the liquor flows and emotions erupt, Titania baits Jen into “greening up” and the pair get into a smackdown on the dance floor with She-Hulk (strangely still fitting into her bridesmaid dress despite now being 6-foot-7) victorious and Titania storming off once again.

Rather than ending on a joyful note, we leave the episode in a sinister laboratory where scientists are preparing a mega-syringe and beefy needle to make another attempt at stealing the Jade Giantess’ blood sample. We’re coasting into the finish line of She-Hulk: Attorney at Law so let’s see if there might finally be a Daredevil appearance in this show’s future as promised.

How many episodes of She-Hulk: Attorney at Law Season 1 are left?

Surging into the final stretch of She-Hulk: Attorney at Law, there will be only two episodes still to check out after Episode 7.

What is the plot of She-Hulk: Attorney at Law Episode 7?

Will the Devil of Hell’s Kitchen ever arrive? Will we see She-Hulk’s signature purple-and-white battle suit? It’s anyone’s guess at this point after being endlessly teased. But with just three episodes left in the season, our chances are getting better!

Titania is definitely not down for the count and after fleeing last week’s wedding with a chocolate cake and broken teeth, we sense there’s more to come from this diva villainess. The show’s big baddie is yet to be revealed and the evil organization trying to stab She-Hulk for her DNA should be unveiled shortly. Let’s just pray there’s not another surprise wedding!

Who is in the cast for She-Hulk: Attorney at Law?

Is there a She-Hulk: Attorney at Law Episode 7 trailer?

Sadly there is no specific She-Hulk Episode 7 trailer. However, if you’re anticipating an increase in the superhero action as we come down to the wire and the October 13 series finale, Marvel Studios recently presented a mid-season trailer that features footage of Charlie Cox as Matt Murdock and his gold-horned cowl, and seemingly more mutants and hulking-out mayhem.

Will there be a She-Hulk: Attorney at Law Season 2?

It’s not looking good for She-Hulk: Attorney at Law Season 2 as the limited series was always meant to be a one-off project for Marvel Studios. There have been rumors that She-Hulk might have a place in Avengers: The Kang Dynasty or Avengers: Secret Wars but there’s been no official word.