“I'd love to see us get another five seasons.” 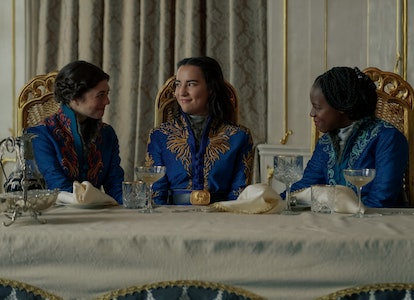 Netflix is betting big on Shadow and Bone. After the success of the original book trilogy and the entire Grishaverse series, Leigh Bardugo’s books come to life in the new series, with changes that only make the original story better. But while there are nearly ten books in the series, Season 1 only covers the events of the first two. What happens next? We asked the showrunner and the author to answer all your burning questions.

Here’s everything you need to know about Shadow and Bone Season 2, from release date to the plot, straight from the people who created it.

Has Shadow and Bone been renewed for a Season 2?

Unfortunately, it’s too early to tell. That decision really depends on the reception from the public once Shadow and Bone is released, but considering reviews claiming this is Netflix’s Game of Thrones, a Season 2 announcement is may be just around the corner. Considering the scope and cost of the show, it would have to be a huge success for Netflix to double down on this adaptation, but the hype is already growing and will likely only get bigger.

“I'd love to see us get another five seasons.”

The team behind Shadow and Bone are hoping for a Season 2 as well.

“I have a lot of hope that we'll get another season,” author Leigh Bardugo tells Inverse. “Honestly, I'd love to see us get another five seasons. There's so much story.”

With the sheer amount of material out there, not adapting it would be a waste.

Is there a Shadow and Bone Season 2 release date?

Not yet, and don’t expect it too soon. Shadow and Bone is an epic show telling an epic story, and that means a long and expensive production. However, you can rest assured that whatever the outcome, a long wait for a Season 2 as rich in depth and worldbuilding as Season 1 will be more than worth it.

Every aspect of Shadow and Bone is meticulously planned to reflect the fantasy world as well as its 19th-century inspiration, so it’s a long process according to showrunner Eric Heisserer.

“The thing that I discovered with my art department are ways that we can make something our own versus having it still reflect a piece of world history,” Heisserer tells Inverse. “We didn't want to break the immersion of the audience member who needed to feel transported into another place.”

What happened in Shadow and Bone Season 1?

Season 1 saw Alina Starkov discover her Sun Summoner palace and be swept into a world of glamor, politics, and intrigue as she leaves her childhood friend Mal and encounters the mysterious, brooding General Kirigan. All along, a criminal gang known as the Crows seeks to kidnap Alina but is unsuccessful.

At the end of the season, it’s revealed General Kirigan is actually the Darkling who created the Shadow Fold in the first place, and, using Alina and the Stag’s influence, makes the Shadow Fold take over the town of Novokribirsk. In a final confrontation, Alina realized she was chosen by the mythical stag and rejects Kirigan’s control. Kirigan then is thrown to the monstrous Volcra by Mal, leaving Alina to catch her breath and regroup with the Crows, the very group that sought her capture.

Every group then goes on their separate ways. The Crows have to return to their bosses empty-handed and just may recruit the Heartrender Nina to help out. Alina and Mal look to escape Ravka altogether and only return when her Sun Summoner powers are strong enough to take down the Shadow Fold entirely.

But the final shot of the series changes everything: even though he’s believed by everyone to be dead, General Kirigan emerges from the Shadow Fold accompanied by his evil creatures, and he’ll be looking for revenge.

Is there a trailer for Shadow and Bone Season 2?

While there’s no trailer yet, considering the cliffhanger Shadow and Bone Season 1 left off on, don’t expect two minutes chock full of footage from the show. Most likely we’ll see a teaser trailer only announcing a release date, and a trailer full of discrete moments so as not to spoil any surprises.

But if you’re looking for spoilers, read on...

What could happen in Shadow and Bone Season 2?

The minds behind Shadow and Bone have big plans for future seasons. When asked what those plans were, Eric Heisserer slipped in the name “Nikolai” in between feigned coughs. In the books, Nikolai is a sort of pirate prince who is later revealed to be the former King of Ravka undercover. Leigh Bardugo agreed, saying she’d love to see characters from her novels Siege and Storm and Six of Crows make the jump to the Netflix series.

But before any new characters can be introduced, the show needs to address the return of the Darkling. Will General Kirigan return to the Palace and try to stoke the flames of unrest, or seek to find Alina and Mal? Will the Crows be sent on a new mission that will allow them to cross paths with more familiar faces? Only time (and Leigh Bardugo’s books) will tell.

Shadow and Bone is now streaming on Netflix.

More like this
Entertainment
8.9.2022 1:00 PM
Has your favorite HBO Max show been canceled? The fate of 9 sci-fi series revealed
By Robin Bea
Culture
8 hours ago
Will the Corinthian return in Sandman Season 2? Comics reveal the answer
By Mónica Marie Zorrilla
Entertainment
8.12.2022 11:00 AM
Neil Gaiman teases a Sandman prequel on Netflix. Here's what that means.
By Mónica Marie Zorrilla
Related Tags
Share: