“When the Martians land, will the press have access?” 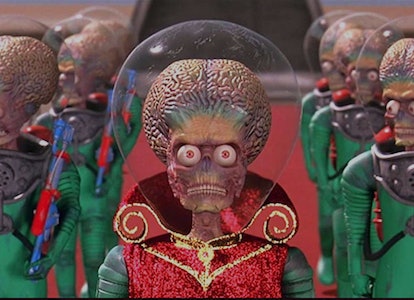 For all of human history, we’ve imagined what it would be like to have visitors from another world. Would their arrival come in the form of a sudden invasion? Would it result in a slow and mysterious decryption process? Would they bring a cookbook?

Typically, humans are the heroes in such stories. Whether aliens are integrated into society or invading the planet, Earthlings are the characters who get our sympathy. But in one 1996 film, the humans may be the heroes, but they’re the most infuriatingly nonsensical heroes who’ve ever existed.

Mars Attacks! is a 1996 film directed by Tim Burton. Based on a trading card game of the same name (albeit without the exclamation point), the film was made while Burton was preparing to make Ed Wood, a biopic of the infamous director of terrible B-movies.

That influence shines throughout in Mars Attacks!, which features cartoonish characters and occasional practical effects. Burton originally intended for the Martians to be entirely stop-motion, but Star Wars effects company Industrial Light and Magic brought them to life with CGI. Mars Attacks!, in adopting this aesthetic, feels like a movie purposely made to be at least a little bad. Spoilers follow for Mars Attacks!

There is no one star of the film. Instead, this is truly an ensemble piece, following twenty-odd different characters as they react to an invasion of massive-headed Martians with bulging eyes. Initially, the Martians feign peaceful intentions, but inevitably comes the scene where they blow up Congress.

After that, Mars Attacks! becomes a no-holds-barred film about humans facing off against an alien race that is, by all accounts, much more powerful. Characters get abducted, experimented on, and at one point Sarah Jessica Parker’s character has her head attached to a chihuahua’s body.

It’s fun to watch aliens blazing their way through the country, decimating the human population. But in the end, there’s something satisfying about the human race clawing back a triumph. These aliens, in a nice genre touch, have a fatal flaw.

But their weakness isn’t water (like in Signs) or fire (The Thing). No, their weakness is a yodel played on an old record. Upon hearing it, the Martians’ heads explode. It’s not the most clever plot twist in the world, but Mars Attacks! isn’t trying to be clever. Above all else, it’s entertaining, and that’s a threshold it more than meets.

Sure, the CGI of the Martians doesn’t age entirely well, but this film’s silly tone has aged like a fine wine. The older it gets, the closer Mars Attacks! seems to the 1950s B-movies it was inspired by. Nowadays, in an age where alien movies are gritty allegories or violent blockbusters, the sheer goofiness of Burton’s film only becomes more enjoyable for the casual Netflix viewer.

If you’re looking to sit back and just enjoy yourself, indulging your childlike impulses of watching things blow up, look no further than Mars Attacks!